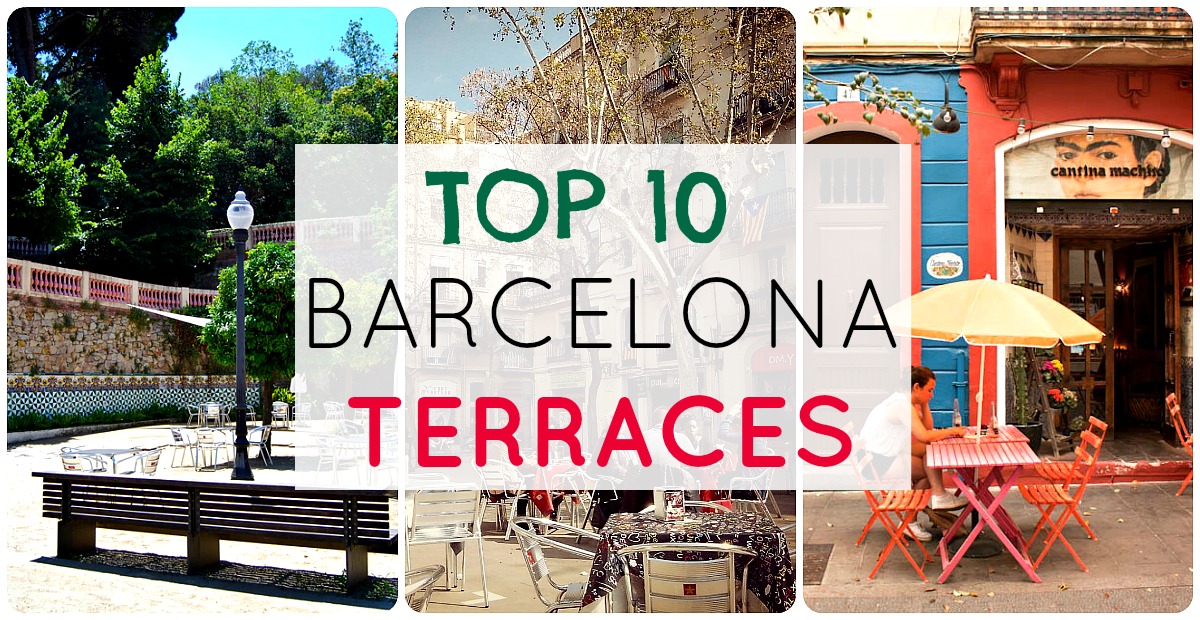 Barcelona is a city that offers joy to visitors. Its architecture - mainly driven by daring artists as Gaudí and Domenech i Muntaner (to name a few) - is known for diversity around the world. But Barcelona is not just a decoration. It's a city that is experienced through its own characteristic features. The best way to do that is watching the people and their customs, such as 'terracing'.

Since my arrival in the Catalan capital, "terracing" has became my favorite sport! To do this, you simply find a good terrace, sit down, and enjoy a nice drink, snack, or meal. The places that belong to the bars, cafés, and restaurants, even up to the tenth floor of a large 5-star hotel.

Since the 1992 Olympics, the council focused on the development of public spaces that allow locals to be outside with friends or family; the Mediterranean culture. Many squares already existed in the upper parts of Barcelona Gràcia, but the south was under-developed. The city of Barcelona is now known for offering a wide range of places where you can easily stop for coffee or a drink; it is part of everyday life.

Just so you know, I love sitting on the terraces! With friends or even alone with a notebook to record my observations or sketch. Since being here, I've tried a number of places I'd like to share with you. I chose 10 especially nice places to relax while watching life around you.

If you are in the city centre and fancy discovering the peculiarities of the Raval neighbourhood, then take a seat on the terraces around the Museum of Contemporary Art of Barcelona (MACBA). The cosmopolitan atmosphere and fashion mix with the sound of skateboard wheels turning and hitting the floor. 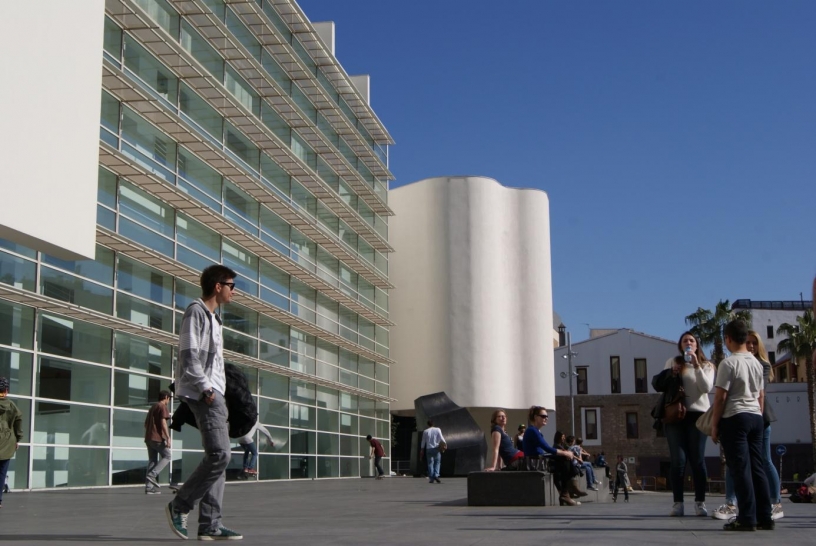 This is a small plaza that's full of history. It can be found at the feet of the old walls dating back to the roman city Barcino. Look carefully at the history hidden in the ancient walls, and let yourself be filled with the tranquility before going for a walk in the stunning winding streets of the Gothic Quarter. 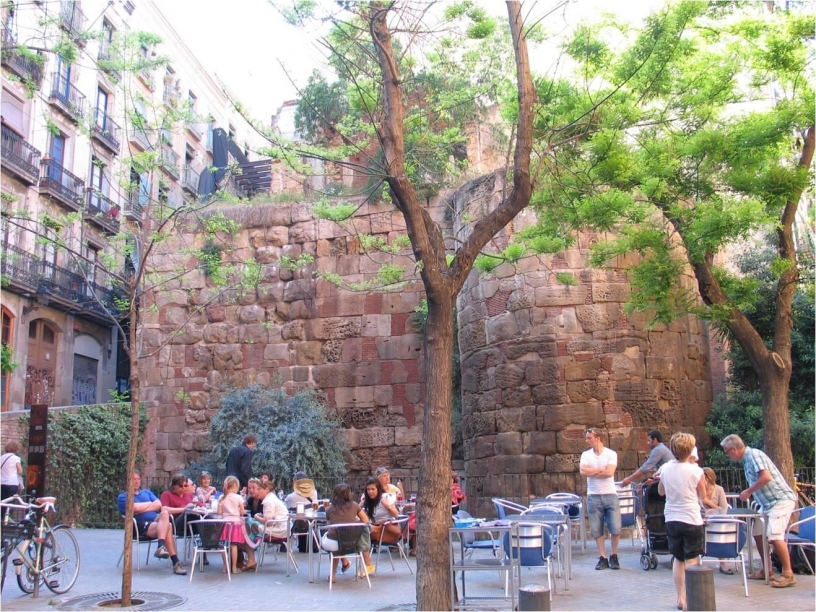 Montjuïc is one of those privileged places where one can enjoy the nature of parks with a panoramic view of vibrant Barcelona. You can find several little bars scattered around the grounds of the mountain, where you can enjoy refreshments surrounded by nature.

Also there is the terrace of the National Art Museum of Catalonia (MNAC), which offers impressive views right up to the Collserola mountain range. During sunset, the golden rays of the sun are enhanced with the sounds of street performers strumming delicate laid back melodies. It all makes this particular terrace very romantic. 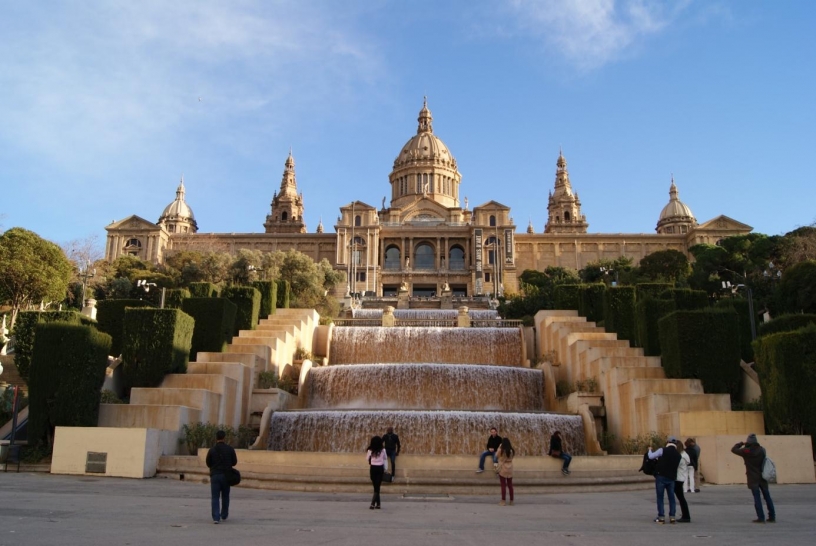 Between the sea and Plaça d'Espanya, at the foot of Montjuïc, one can find the Poble Sec neighbourhood, which is full of well known nocturnal places. Clubs, theatres, concert halls... It is the realm of entertainment! Poble Sec is also a very popular and cosmopolitan area, shown by the range of restaurants along Carrer Blai, including tapas, pinchos, Canarian, Moroccan, Punjabi, and a huge variety of bars. The terraces are always full and locals seem to love them ;)! 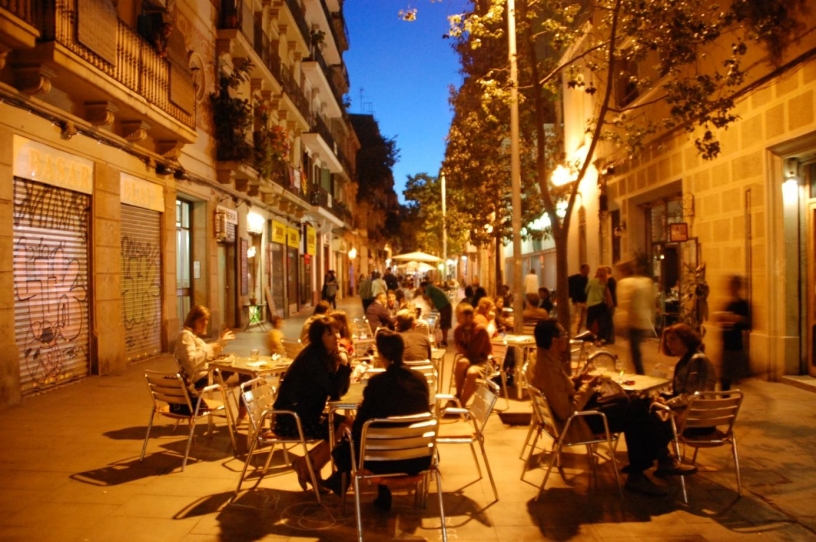 Foto: Cultura Up to you

In Sants, you won't see many tourists except around the station. Plaça d'Osca turns quiet during the day where you can have a coffee while watching people. At night, the square comes alive quickly; young people and local families gather to enjoy a vermouth or beer late into the night. Be warned though! After a few hours, you must come armed with patience to find a free table on a terrace. 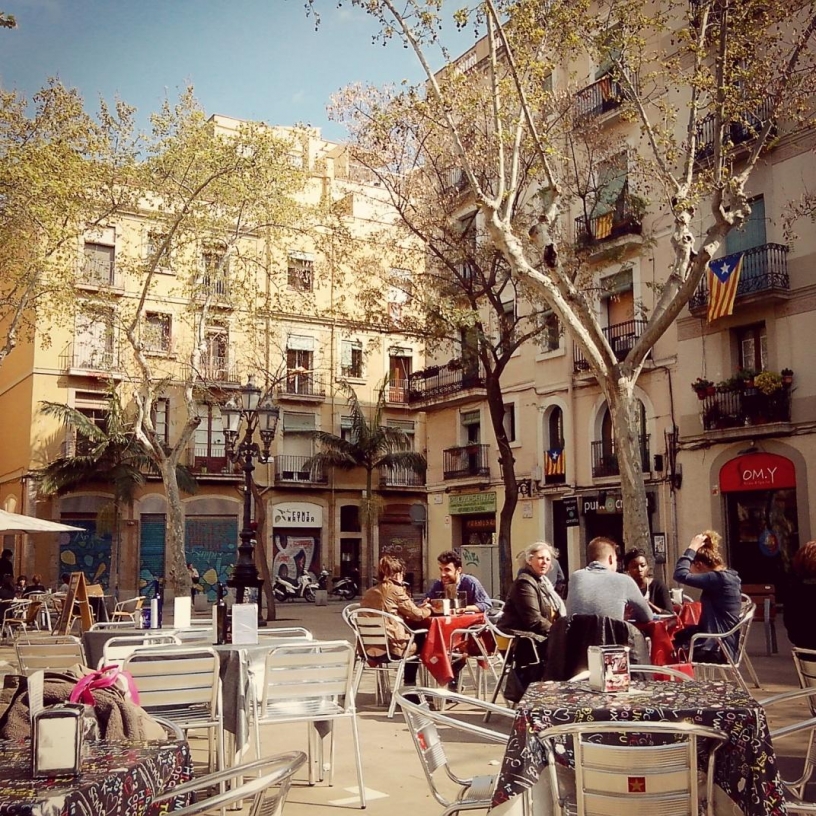 Barcelona is the sea. Since the city was chosen to host the 1992 Olympic Games, the Catalan capital is fully oriented toward the Mediterranean, reshaping the entire coast. At the gates of Barceloneta we find Plaça del Mar. The summer holiday atmosphere is absolutely guaranteed! Early rising workers, athletes, beach lovers, partygoers ... All come through during the day with the vast blue sea as a backdrop. 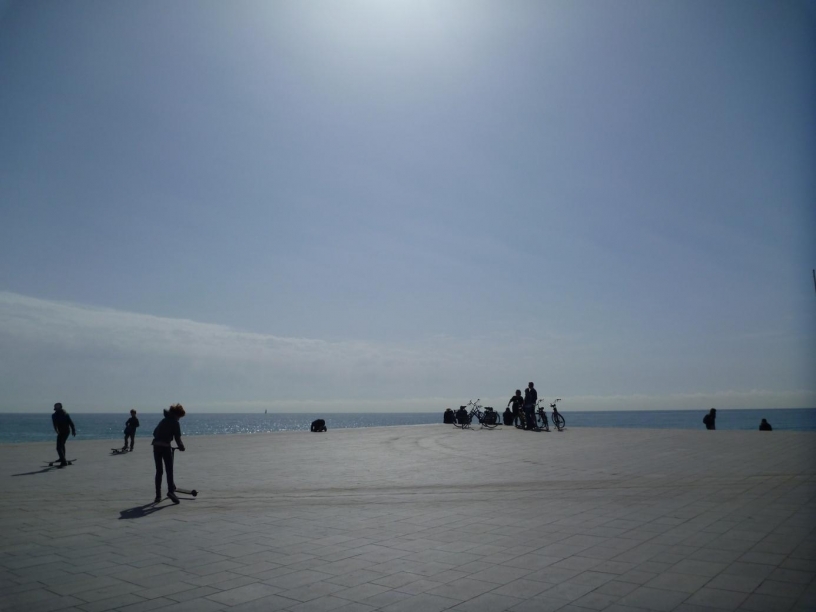 If you're looking for a intimate ambiance, almost town-like, you'll find it in the neighborhood of Gràcia. Plaça de la Villa de Gràcia is one of the most dynamic places in the area. In addition to its many terraces, it is not unusual to find traditions like Gegantes de Gràcia or newly-wed couples. It's also here that you can usually find a local concert or Castellers display - a show of impressive human towers ... 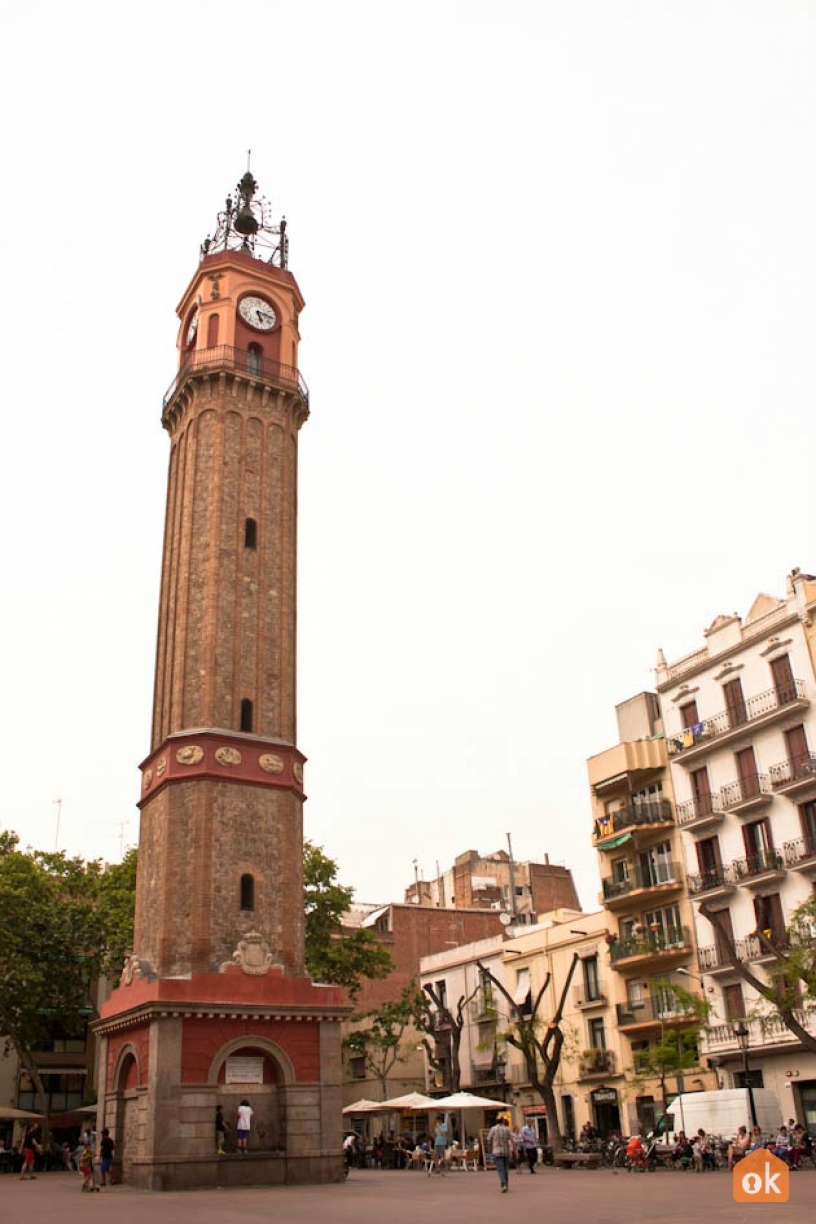 Poblenou is a neighbourhood rising in fame, away from the bustle of the city centre while still not too far. In the past it wasn't an area for living in, rather it was the industrial zone and one of the reasons Barcelona was known in the UK as "the Manchester of Spain". Today it's a family-friendly area where you can stroll down the Rambla del Poblenou and be seduced by the tranquility of the neighborhood before going to the beach for a swim. 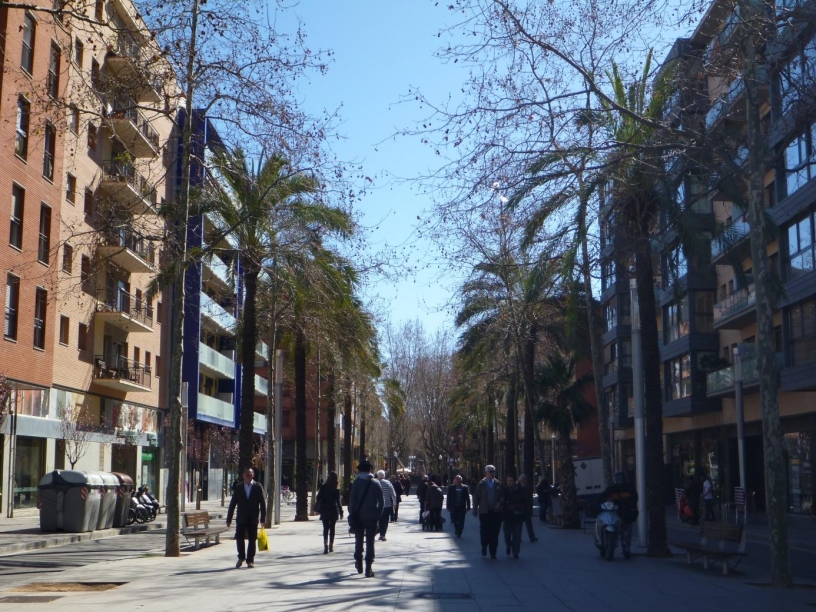 One of the highlights of Barcelona, is indisputably the architecture. Old meets modern with total harmony. Moreover, modernist architects - seemingly lead by Antoni Gaudí - brought their unique architectural vision to the city, breaking established codes of the time. Avinguda Gaudí is full of cafes and restaurants, connecting two great works of Catalan Modernism; Hospital de Sant Pau by Lluís Domènech i Montaner and the Sagrada Familia by Gaudí. Between one style and the other, stop for a moment to rest on one of the many terraces along the way! 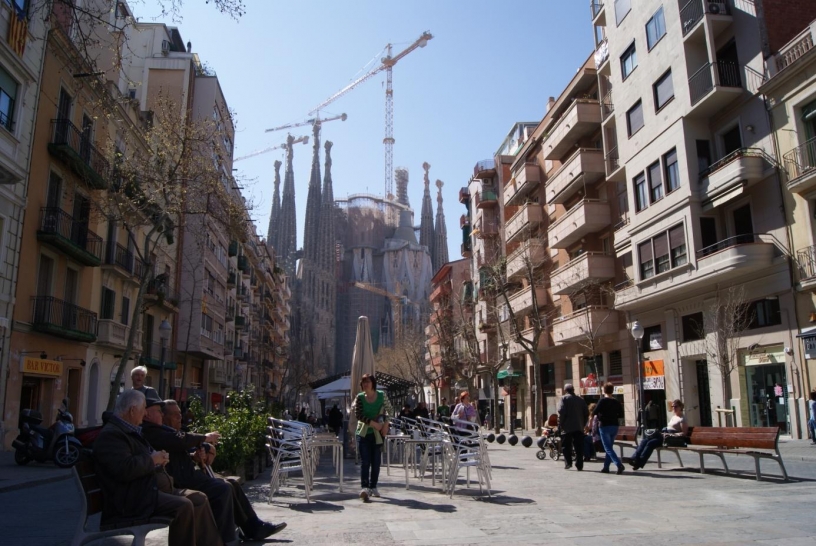 A timeless place in the heart of a little-known neighborhood in Barcelona, so perhaps my favourite with its narrow streets, low houses, and small shops that look like they have been there forever... Plaça Bacardi in the Horta neighbourhood is surrounded by buildings from old dairies, bakeries, dealers in poultry and ham, now converted into small apartment buildings with Mediterranean charm. Some tables, a few banks, and the tranquility of a village in the city of Barcelona. 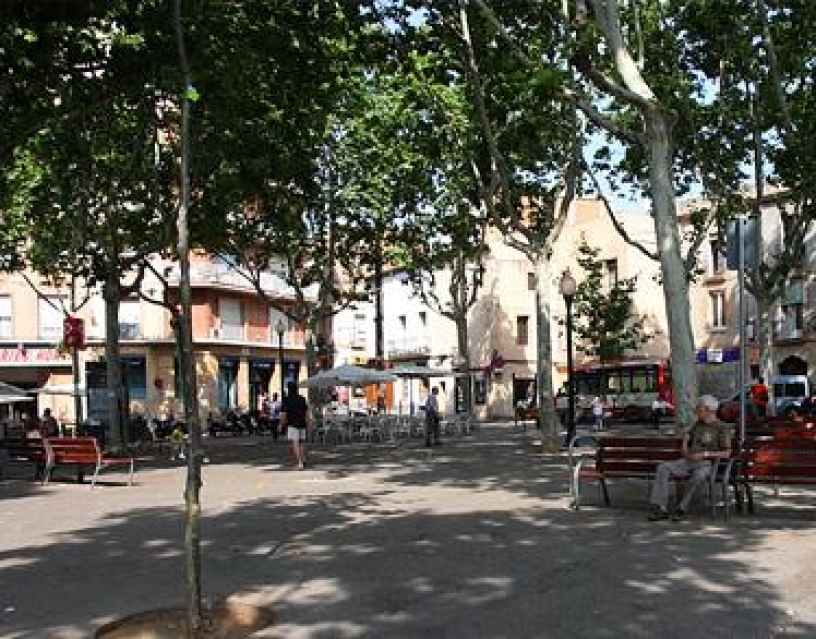 Of course, many other places are worthy of attention like Plaça del Sortidor in Poble Sec, Plaça de la Concorde in Les Corts, some little plazas around Ciutat Vella, and others in the lesser touristy locations.

Barcelona is a city where you can discover a new space every day, right in the middle of or far away from the urban bustle. This short list is 10 pleasant places I prefer, but there are hundreds, if not thousands of areas in the city to find. Now it's up to you to make your own discoveries with a simple walk around the city.

Map of the best Barcelona terraces