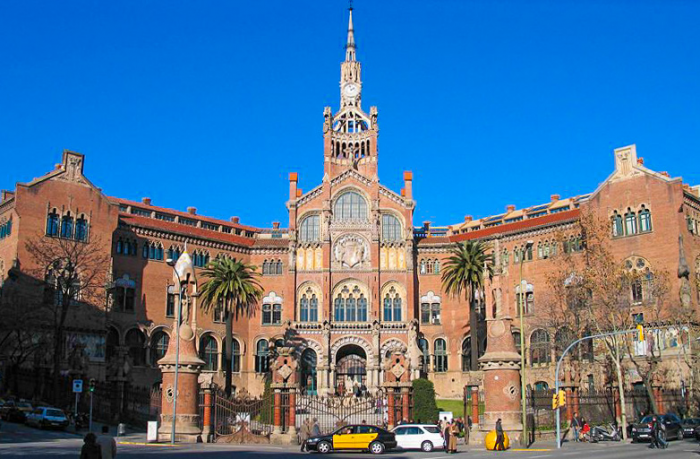 The Hospital of Sant Pau (Full name: Hospital de la Santa Creu i Sant Pau) has always been one of the main medical centres in Barcelona, and yet has also been recognized for its beauty and art. In 1997 it was declared a World Heritage Site by UNESCO, therefore it's in your best interest to visit this building if you're in Barcelona, it's completely worth it.

A history of administrative disputes

The Hospital of Sant Pau dates back 1401 with the primary objective being to reduce the number of hospitals in the Barcelona region, formed up of 6 other hospitals. It was managed by a prior from a religious order. Throughout its history, the civil and religious powers have always fought over its management, increasing further as it eventually became the main hospital of Catalonia in the 19th century. It was taken over by the local government in 1978 and has since been a university hospital used to teach students.

A work of art between father and son

With the arrival of the 20th century, it was necessary to build a new building for the growing population. Therefore a new project was funded by the banker Pau Gil, which is why the hospital today is known to have Sant Pau in the name (it's not directly named after him, just the patron saint paul in his honour).

The person responsible for the project was Lluís Domènech i Montaner, also famous for his work on the modernist Palau de la Musica. Between 1902 and 1913, he built three modernist buildings, whose unique style made them stand out in the area.

History repeated itself and yet more administrative disputes arrived, eventually finance ran out and Lluis left the project. That's not the end however, as his son took over in 1920, who erected six more buildings on the site, as well as adjoining streets, parks, fountains, and an area to grow medicinal plants to the hospital. He even faced his buildings toward the sea so that patients would feel a cool sea breeze.

If you're visiting the hospital today, then you'll find that the modernist structures by the Domènechs are no longer used as hospitals, but have undergone renovation for use as cultural spaces, including tours. There have been other buildings built more recently like Fundacio Puigvert, which treats patients with urological, androginal, and renal problems (more information about that specialist clinic available here).

It is principally a modernist style site, however it implements styles from other eras of architecture. It emphasizes the use of bricks, something mainly found in Mudejar architecture, a style that largely inspired Lluis Domènech. The site consists of the main building and 27 smaller wards, all connected via underground tunnels. The main structure contains a library and a church, both of artistic significance. Each of the wards has its own particular style, with the buildings increasing in size the further they move from the main building.

Other attractions in Horta-Guinardó