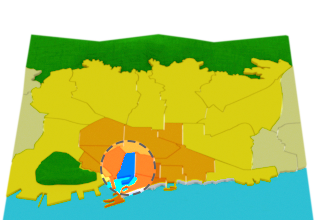 The Gothic Quarter — Origen of Barcelona and tourism hotspot

The Gothic Quarter is one of the most beautiful and intriguing places in Barcelona. Strolling through its narrow streets will lead you into a medieval atmosphere, where the best restaurants and shops are hidden behind small doors and dead ends. Here you'll find a young atmosphere coupled with a lot of diversity.

In this article we show you a video in which you will discover the district of Gothic by the eyes of their neighbors. We also tell you the reasons why stay here, its attractions to visit, the best places to eat and shopping. If you are student you will also be interested in learning about libraries , public places and places where playing sports .

Video presentation of the Gothic Quarter

The neighborhood is located to the right of Las Ramblas, which runs through the old town and down to the sea. It is a maze of narrow streets that take you on a journey through history. Always be on the look out here for something new because there are surprises around every corner! If this neighborhood seduces you, don't hesitate to check our selection of monthly rentals.

If you're looking for a young and international atmosphere and you want to be located in the heart of the city, the Gothic Quarter is for you. The nightlife and the crowded streets make it slightly less family friendly than other neighbourhoods, but you'll be right in the city centre and just a few minutes away from... well... practically anything worth seeing!

El Portal de l'Angel is a popular shopping and pedestrian street that leads to the spacious Cathedral Square , dominated by the remains of the Roman walls that protected the city at one point. If you're interested in roman history, then you can see plenty of remains in Barcelona, simply follow this Roman tour route through the old city.

One of the best attractions, located right in the heart of the neighborhood is the magnificent Cathedral, which has a beautiful courtyard full of greenery and 13 geese that live there. From the top of the neo-Gothic facade you can see many of the spooky gargoyles.

Behind the Cathedral you will find Plaça del Rei with its impressive Gothic buildings that show what an important cultural and economic role Barcelona played in the Middle Ages.

On Plaça Sant Jaume there is the City Hall and the Parliament of the Catalan Government. It's also the home of The Museum of History where you can see some roman ruins preserved in its basement.

Not far from there is Plaça Reial (Royal Plaza), a large square that's lined with palm trees, giving a strong Cuban feel. There are many bars and restaurants with terraces here, making it a relaxing place to stop and rest. It's also where you'll find one of Gaudí's first public projects; some lamp-posts he made for the city council just before graduating.

Students in the Gotico

If you are looking for student flat you could be interested about where you can practice sport, go to a library or a public space for studying.

The Gothic is the oldest area of Barcelona and attracts people from all corners of the world to visit, work and also study. You can find the UPEC , Universitat Progressista d'Estiu de Catalunya and the UPF , Pompeu Fabra University. In the Barri Gòtic you will also find a good number of libraries in historical buildings to study like the mythical Gòtic-Andreu Nin library.

Being part of the old city of Barcelona, ​​everything is narrow streets and buildings glued together, which leaves little room for large parks. Even so, we recommend you to look for the hidden places that you can study calmly, such as Frederic Marès or Antonio López Square on the Paseo del Puerto. It is also advisable to spend an afternoon at George Orwell Square where you can study and sunbathe but quickly fill up with a bar terrace, ideal for sharing a beer with your friends.

The Barri Gotic is not the best place to find clues or municipal fields as there is only one, the Esportiu Municipal Colom Center, but going out in the streets allows you to discover secrets of this neighborhood Historic city of Barcelona.

You're absolutely spoilt for choice thanks to the large quantity of bars and restaurants in the city centre, especially close to Plaça Reial that's always buzzing day and night. Carrer Ferran is right next to this plaza and is a great place to stop by to grab a bite. There are also a ton of vegan and vegetarian restaurants in and around this area, one that we recommend is Vegetalia.

Can Culleretes Restaurant is a highly recommendable place. It's the oldest of its kind in Barcelona, going strong since 1786. Anyone looking for Catalan cuisine will want to stop by here, but not without reserving beforehand. One of "the usuals" are the canelones, which are delicious rolls of pasta filled with mince meat.

If you're looking for something more along the lines of tapas then Bilbao Berria is more up your alley. Here, they serve the Basque version of tapas called Pinxos. It's all tasty though, so get in there.

Nightlife in the Gothic Quarter is lively and there's always somewhere to have a drink or dance. Warm up at Ryan's Irish Pub Paradise, with a good drink at good prices... Now that the engine has started up, you can get going.

One popular option is the Sidecar Factory Club, a place where some of the best live concerts can be found followed by fantastic after-parties. It's one of the oldest clubs in Barcelona with good vibes on every corner.

Another legendary option in the Gothic Quarter is Jamboree. Just like Sidecar, it has music, live performances, and after-parties with a dance-floor that's full of non-stop action.

Commercial activity is also bustling in the Gothic Quarter, with Portal de L'Angel being one of the most popular high streets of the city, with well known stores like Zara and El Corte Inglés, to all the little boutiques along Carrer Avinyó.

L4 - Yellow Line at Jaume I and Urquinaona will take you to the beach in about 10 minutes, if you're in the north part of the district. You can easily walk there from the south part.

To the north, the Gothic Quarter extends to Plaça de Catalunya, the official city centre, and the most well-connected point of the entire city in regards to the transport with metro and train station, bus stops, taxis, and Aerobus.