The major festivals of Barcelona's neighbourhoods 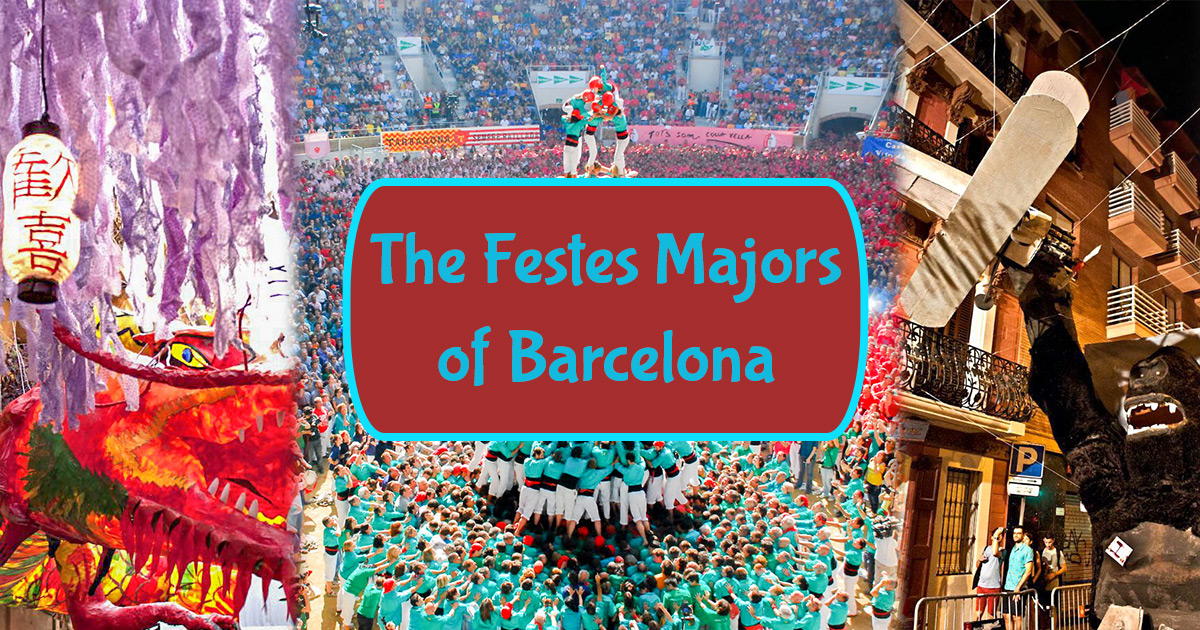 Barcelona is a lively city, that much cannot be denied, but not just in the nightlife sense, but rather the annual major celebrations throughout the city each year. As you'll come to know, the Catalan capital is divided into 10 districts formed from 73 neighbourhoods. Out of all those neighbourhoods you can count on the fact that the majority have an annual celebration and some span over multiple days (that's about a fifth of the year of just celebrations)! You can always find a concert, family activities, shows, Catalan traditions like Sardana dances and Casteller human towers, and more. Some are recognized around the world, others are not, but you're in for a great time at all!

Think you know all the celebrations in Barcelona? You likely know the Festa Major of Gràcia and Sants , as well as La Mercè, right? These are just the tip of iceberg and already the most crowded, but if you look a little, you will find a great time somewhere else...

What are the Festes Majors?

If you want to come work or have a holiday in Barcelona but you have a small budget, it's possible! Look at our cheap accomodation in Barcelona.We offer apartments of different types, renovated and well furnished in all areas of Barcelona!

Human towers, correfocs, sardanas... They are symbols of Catalan culture that occupy a special place during these festivities. In addition, Las Festes Majors are accompanied by a large number of free outdoor concerts. The activities are free, popular and informal.

Here are the most important parties chronologically ordered and at the end of the article I give you a list of all of them organised by district.

It is celebrated in honor of Sant Pere, its patron, and takes place within the neighbourhoods of Santa Caterina, Ribera and Sant Pere. Varied activities are carried out in 17 areas of the neighbourhood. Around 50 acts will in which artistic expressions such as circus, cabaret or dance will be performed.

Video of the Born and Sant Pere Festival

In the middle of July the festivities of Poble Sec arrive, festivals which bring unmistakable flavour to the popular neighbourhood. Using words from the Mayor of Barcelona (Ada Colau) this is a neighbourhood "proud of its past of factories and workshops, and its intercultural and creative present".

The parties of the Gothic Quarter, known as the 'Festes de Sant Roc' have been declared Patrimonial Festival of National Interest, by the Generalitat de Catalunya. This is because they are the oldest festivals in the city that date back to 1589.

These celebrations are made in honor of the Virgen del Carmen, patron saint of the main parish of the neighbourhood. During 4 days its streets are full, not only of people, but of activities and events. There are music, dances, children's activities, popular meals, giants, devils, theatres, castellers, bastoners and sports competitions.

The most distinctive part of this celebration is the decoration of the neighbourhood. Sixteen of its streets participate in a contest. Among these the best of each year is chosen. And that's not all, because the festival committee of this neighbourhood organises more than 450 activities every year.

Did you know that in Sants a contest identical to that of the Fiestas de Gràcia is held? Look look...

The activities in the neighbourhood are happen continuously and offer possibilities for all kinds of tastes and ages. There is a special atmosphere at this festival where we find food and drink in the street at affordable prices. If you want to know more about one of the most popular festivals in the city, click here!

There are activities of all kinds: dances, concerts for young people, children's activities, community meals, sporting events, gymkhana... The popular culture of the neighbourhood, very rich and varied, also plays an important role. All neighbourhood groups come together in the opening parade. During the party there are dance exhibitions, dances and a final correfoc.

The neighbourhood has a long festive tradition. It is demonstrated in documents dating back to 1800 that attest to the existence of this celebration when Poblenou was just a nucleus on the outskirts of Barcelona. For two weeks music, art, dance and sports have an take place.

Between the last days of September and the first days of October the Left Eixample dresses up for a party and fills up with acts and celebrations. They highlight you will encounter are the giants and big heads, dances, demonstrations of Catalan folk dances, a large correfoc, popular meals, concerts, talks, sports competitions, workshops, children's entertainment shows, the traditional meeting of lace makers, etc.

In addition to neighbourhood parties, there is also the general party of the city of Barcelona, called La Mercè. Discover all the information about this party here:

The Festival of Barceloneta is celebrated around the festivity of San Miguel, which is on 29 September. It is organized by the Neighborhood Association and has activities such as sardanas, havana songs, correfoc with the devils and parades with the giants Pep Barceló and María la Nieta.

The Fiesta Mayor de Les Corts is celebrated the first half of October. The festival gives us a very complete picture of the cultural and associative life of the neighbourhood. The squares of Can Rosés, de la Concordia and Comas are the heart of the old nucleus and form the axis where much of the party takes place.

The festival of Sarrià is participative and many neighbourhood entities are involved in it, grouped under the umbrella of the Festival Commission of the Roser de Sarrià. The neighbours, on a personal basis, also take part in it by adorning the balconies and facades or organising the fraternity dinners that are held in many streets of the historic centre.

Now it is the turn of the Sant Martí neighbourhood. A colourful party is organised in the heart of its district. The festivities will take place in the Era de Can Planas, in the Fondal de la Verneda and also in 'L'espai La Gàbia' in the Sant Martí park. The event is organised by the VERN Coordinator, regrouping around fifty neighbourhood associations.

Next I give you a list of all the parties of the districts ordered by districts:

First half of October

First half of June

First half of November

First half of July

Llaguna
Second half of September

1/5 - 1 vote
When do the annual neighbourhood festivals in Barcelona take place?
1 5 1
Tweet