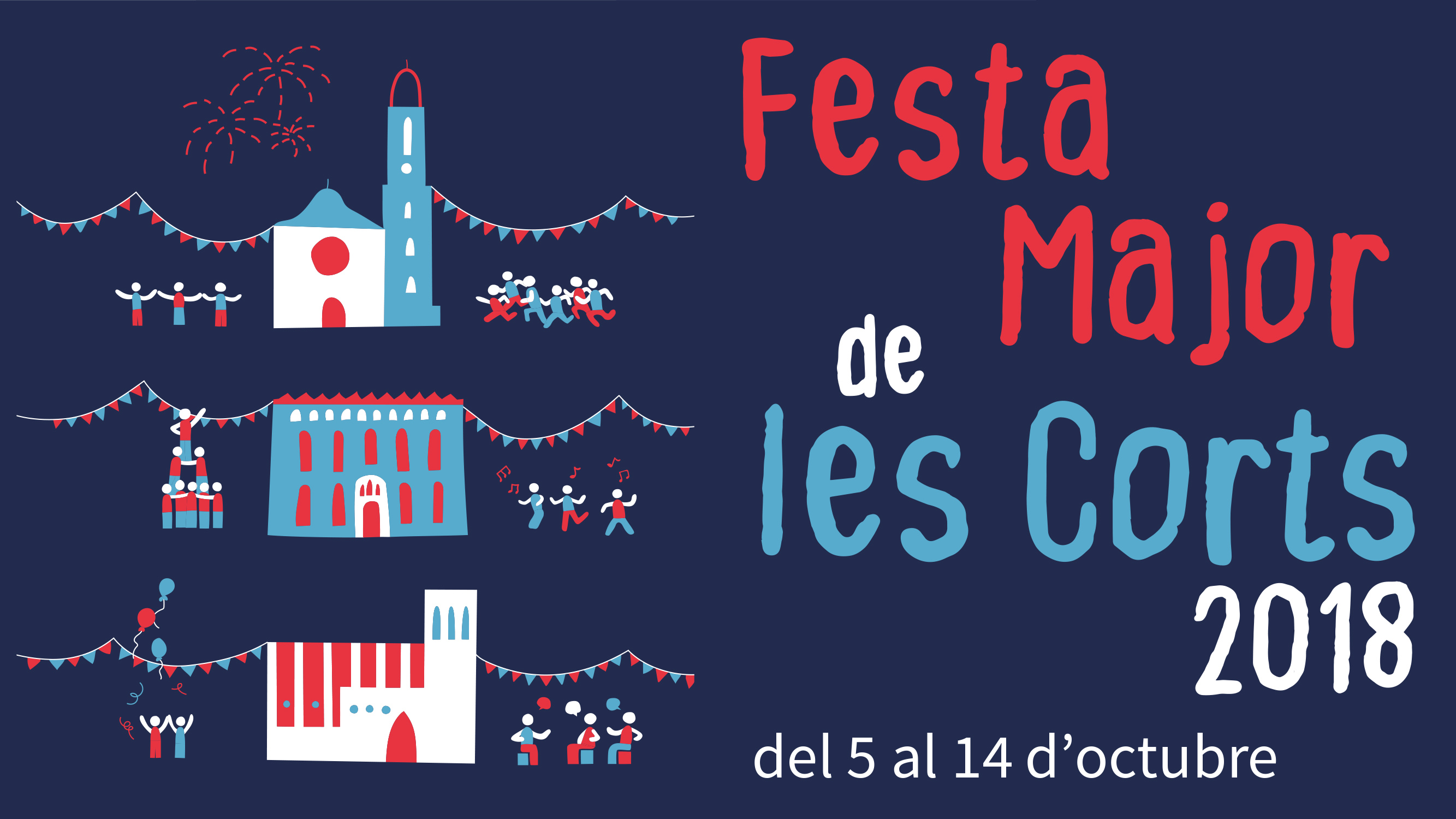 The Festes de Les Corts (Festivitie of Les Corts) is celebrated on the first fortnight of October in the Les Corts district of Barcelona. The festival will give you an idea of just how cultural and lively the neighbourhood is. Events take place mainly in squares like Plaça de Can Rosés, Plaça de la Concòrdia and Plaça de Comas. The most outstanding events include a Correfoc (firerun), the morning of the main festival with the city eagle dance, Castellers day (human towers) and a traditional dance exhibition that take place at the Pedralbes monastery. 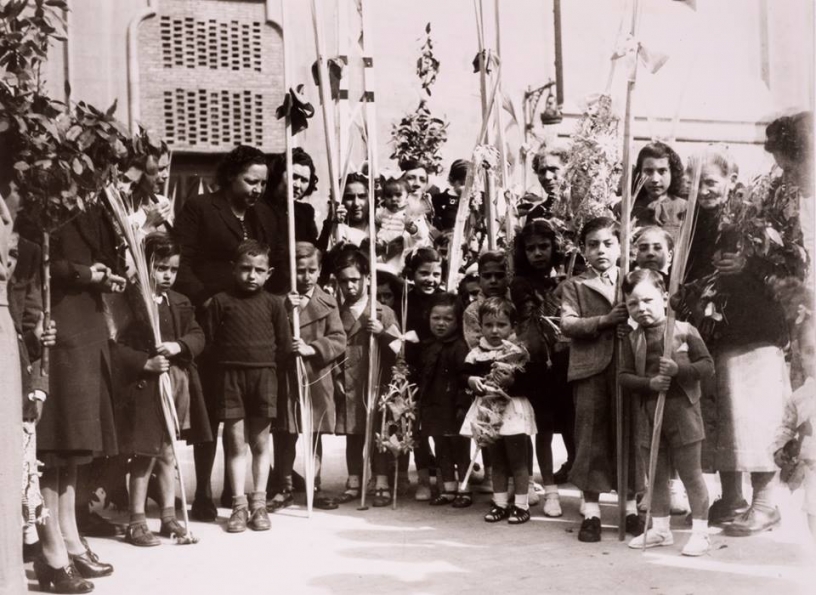 The history of Les Corts

During the second Sunday of October, many towns dedicate celebrations to the Virgin of Los Remedios with offerings in her honour. One of the popular traditions that stands out is putting silk ribbons on pregnant women as they say it helps with the birth. The affiliation between the Festivals of Les Corts and the celebration of the Virgin of Los Remedios was promoted by one of the first rectors of the parish, Pere Pla, who governed it between 1847 and 1851. 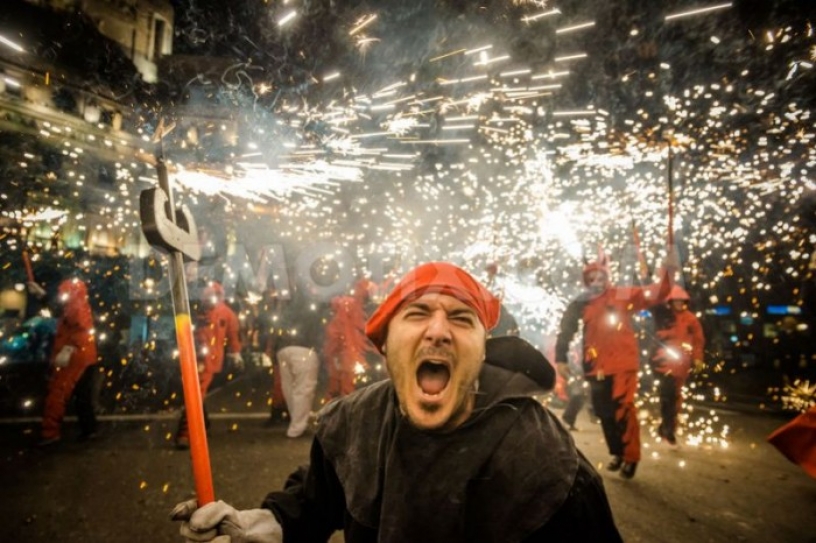 The correfoc (literally translated meaning is Firerun) is an event in the streets where the goal is to run from the sparks thrown by the Diables (devils) and mythological beings. It comes from the dance of the devils that has been dated back to the 12th century. However, it wasn't until the 20th century that the Correfoc took its current form. Correfocs can be very fun, but you could also get burnt so be careful.

On the first day of the festival the whole neighbourhood comes together for a huge correfoc. It starts with the reading of traditional verses, followed by the correfoc along the streets of the district. Together groups come together such as the Bocs de Can Rosés, Diables de Les Corts, Timbalers d'Itaca and La Repúbli-k de l'Avern. This event also has a programme of activities aimed at younger audiences.

This morning ceremony is composed of the Gegants, Pedralbes Dragon and neighbourhood fire groups, who come out in a parade alongside festive imagery and figures from all over the city. After hearing the proclamation in Plaça de Comas, the Gegants of Jaume II, Elisenda de Montcada and City Eagle will dance.

One of the most symbolic spaces in the district of Les Corts is the gothic Pedralbes Monastery. It's a tradition that every year Esbart Ciutat Comtal holds a dance exhibition on an outdoor stage. You can see a whole repertoire of traditional dances, composed of 19th century pieces from all the Catalan speaking countries. 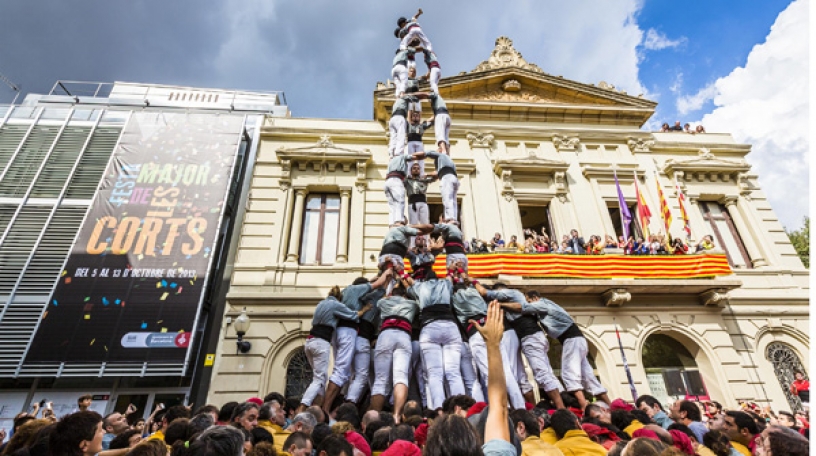 Castellers are an amazing Catalan tradition

Castellers are people who make human towers. The tradition has been going for more than 200 years. Since the '80s, a revival of Casteller culture has extended throughout all of Catalonia, Northern Catalonia and the Balearic Islands, becoming a powerful symbol of Catalan identity. But what is a Casteller? Well actually, the human tower is not the Casteller, it's a Castell. A Casteller is the name of someone who forms the Castell… so now you’ve learned something new!

The Sunday of the festival in Plaça de Comas is converted into the setting for the Castellers. The day starts at midday and three groups participate, one of them is always from the city.

The poster has been selected by a jury formed of different entities of the 'Federació d'Associacions de Veïns i Comissions de Festes de Les Corts', as well as the 'Taula de Cultura del Districte'.

A young, colourful, fresh and dynamic poster, it calls on the participation of the whole district and a big zipper to opening the fun up to citizens.

This image gives the starting shot for the Festa Major of Les Corts to rev everyone up! Save the date and participate in fun festival activities that will surprise you!

Discover the neighbourhood of Les Corts and enjoy this area of Barcelona. Les Corts is located in the east of the city. It is known for it's business activity and FC Barcelona's famous Camp Nou football ground. The neighbourhood is full of students but is still quiet.

Neighbourhood festivals are a classic of Barcelona districts, as you will see. Discover all of them in this guide we have made especially for you!