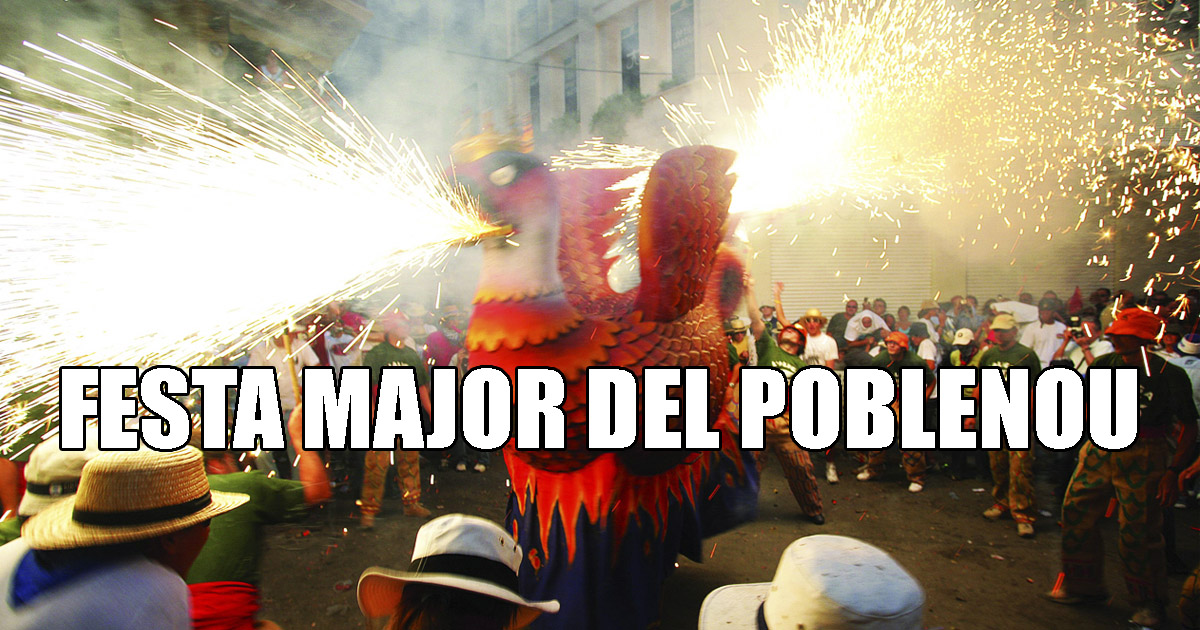 The Festa Major of Poblenou (Major Festival of Poblenou) is celebrated during the first half of September. The neighbourhood associations are actively involved in the organization of activities of these festivities. For two weeks music, art, dance and sport have a significant role. The associations take charge of providing different events, including Gegants (giants), Correfocs (Fire runs), street meals, workshops for children and even sports championships.

The neighborhood has a long festive tradition. This is demonstrated in documents dated back to 1800 that confirm the existence of this celebration when Poblenou was just a small village on the outskirts of Barcelona.

More than 20 festive events are organized daily across the 12 streets that participate in the festival. The celebrations were stopped by the Franco regime during the dictatorship in Spain, but they began again in 1976. Since this date it's been ongoing each year without fail.

Every year, neighbours forge their hardships for a few days and gather to celebrate their biggest festival, which is organized in two different ways. One is the programme from the Official Commission and the other is a programme that the residents of the neighbourhood make in the streets. 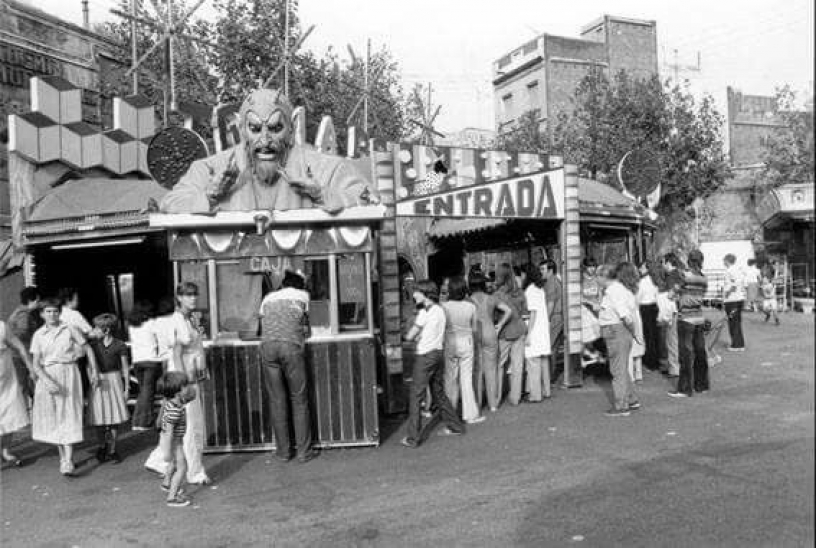 Festa de Poblenou many years ago...

Back in the day, cash prizes — between 400 and 1000 pesetas — were granted by the commission to the best adorned streets. Depending on the year there were up to 17 ornated streets. The ones that more often won the prize were Passatge de Cantí, Carrer del Llatzeret, Carrer de Marià Aguiló, Carrer de l'Amistat and Carrer Guillem de Llúria. Even in the past, neighbours organized dances, sardanas, snacks, clowns, singing contests, variety shows... It was an authentic festival!

The official commission organized painting exhibition contents and gave out prizes for "virtue, work and patriotic love". They distributed money to the needy and organized snacks for the children at the Centre for the Protection of Minors. For their part, the entities celebrated their own activities during the festival.

For more than thirty years, the Gegants of Poblenou group has organized an event on the Sunday of the festival. Gegants from all over the country come to meet in front of the Centre d'Imatgeria Festiva de Sant Martí (Festival Imagery Centre). They make a parade through the streets of the neighbourhood.

During the parades, it's typical to see Gegants (giants), nans (dwarfs), costumes, people on stilts and mythological animals. They're always accompanied by live music, either wind instruments and/or percussion, sometimes also with strings. 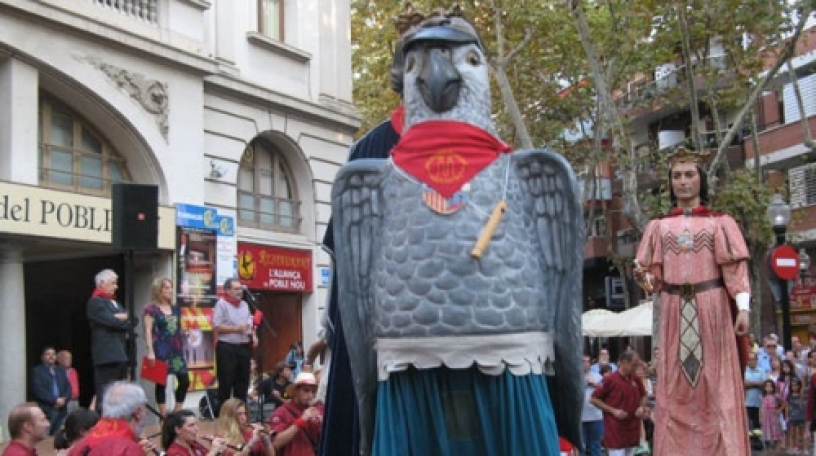 Opening parade of the festival. During this festive act, a sample of the popular culture groups of the neighbourhood take part, such as the Diables (devils), Colla del Dragón, Gegants and Castellers. The parade, which is done before the reading of the opening statement, leaves from Rambla de Poblenou and ends at the same place.

Reading of the verses

The correfocs are popular cultural gatherings in Catalan countries. They are among the most striking traditions of the Catalan festivities (especially during a Festa Major). The devils — groups disguised as demons — come running and dancing with their fireworks around the people to the rhythm of the drumming that accompanies them. 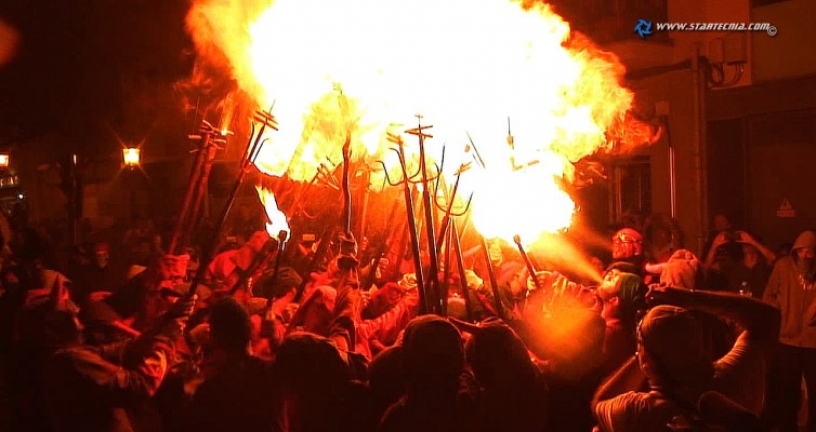 TheColla de Diables del Poblenou and Colla del Dragón organize this fire run together, which includes fire-spitting characters like the spiked dragon, wyvern and "The Little Strawberry" — a smaller and more friendly looking red dragon made specifically for younger audiences.

Bagpipes and drums sounded off by various neighbourhood groups meet on the Sunday of the festival to play a Diana — a type of military style fanfare. They make a route through the streets in order to wake neighbours, visiting neighbours and various locales to invite them for a bite to eat.

Day of the Castellers

The Poblenou Festival ends with a parade of fire where all participants are invited to make noise with pans, drums and whistles. Characters in this parade include the Gegants, Bernat and Maria; and the beasts of the Colla del Dragón. In addition to the more traditional, many other activities have been prepared for this event.

The program for 2018 is still not available. 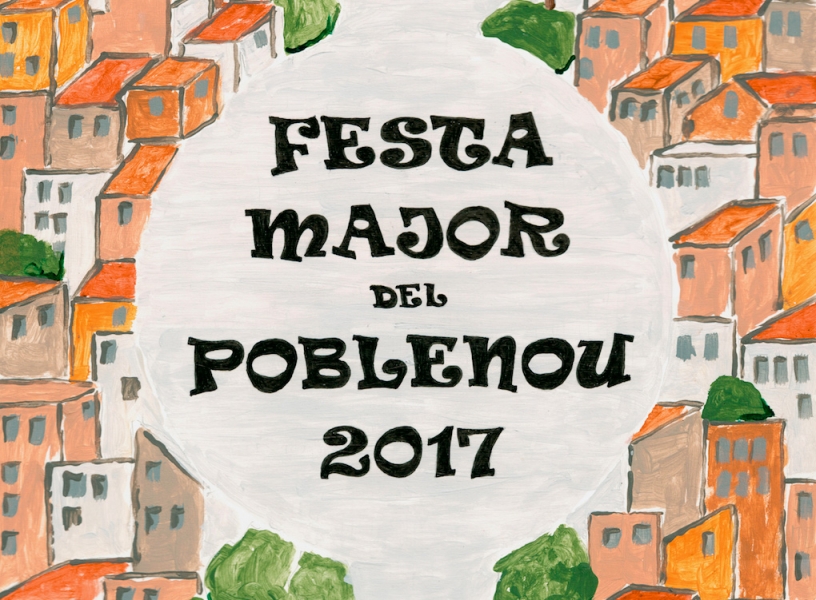 Discover the Poblenou neighbourhood and enjoys its sea views. This neighbourhood is located in the Sant Martí district in the southeast of Barcelona. At the end of the 19th Century, it was the territory with most industrial establishments in the country, so much so that it was described as the "Catalan Manchester". With the Olympic Games, there was a huge renovation of this neighbourhood.

The festivals are a classic tradition of Barcelona's neighbourhoods, as you can see. Discover them all with this guide that we've made especially for you. (Yes you, Joseph).