Medieval Barcelona: Amongst History and Legends 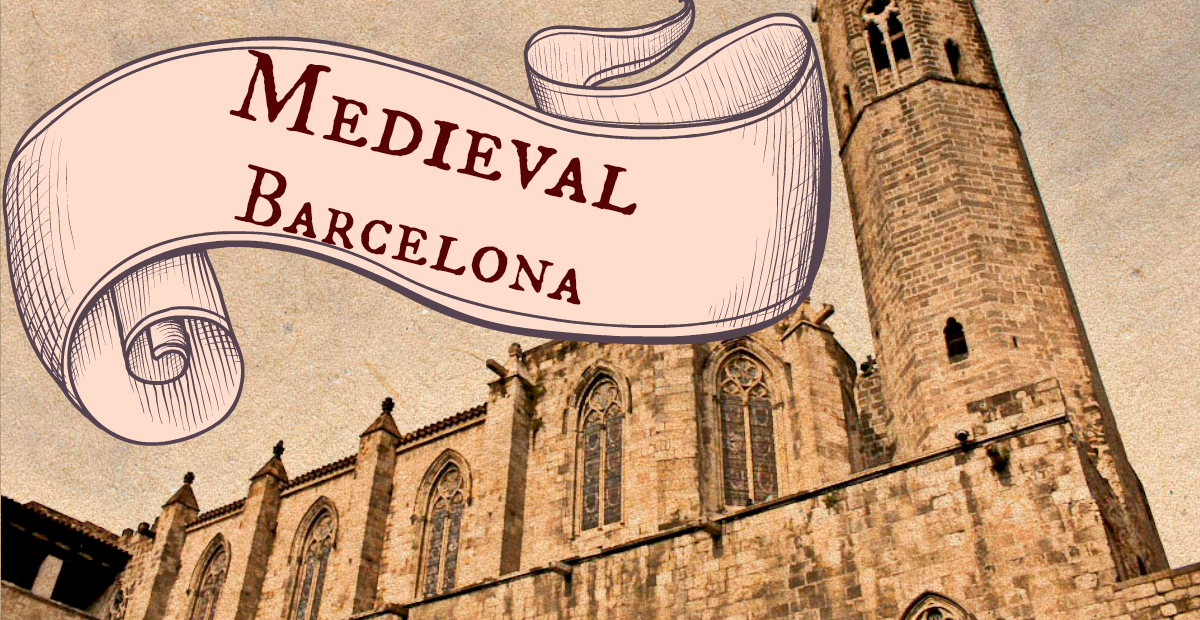 A trip back in time through the streets of the city ...

The Catalan capital is a very old city with a history dating back thousands of years... In this article you will discover the Medieval Barcelona, with its stories and legends hidden among the narrow and mysterious streets of the Gothic Quarter...

A bit of history

According to myths, Barcelona was said to be founded by the Demi-God Hercules in 2000 BC, when he accompanied Jason and the Argonauts on a journey in search of the Golden Fleece and they landed in the Peninsula after a storm. If you want to know more about the Greek myth of Barcelona, take a look at this article. Stories aside, the Phoenicians were in fact the first to settle in the area of Barkeno, followed by the Romans 200 years later who officially began work on what we know as the city Barcino. You can find remnants of Roman Barcelona of which evidence leads us to believe was established between 15 - 10 BC.

The Medieval Barcelona dates (more or less) to the eleventh century AD, after the occupation of the city by the Moors. Barcelona began a long period of prosperity with Charlemagne, thanks to its leadership in trade across the Mediterranean. The city became a powerful center of naval command and commercial base, so magnificent Gothic buildings were built, and the Medieval heart of the city was protected by new walls.

In the Middle Ages, the Count of Barcelona (Borrell II) initiated de facto independence from the latter years of Charlemagne's empire. It was the beginning of a strong Catalan culture. Eventually just under 200 years later, with the marriage between Ramón Berenguer IV and Petronila of Aragón, Catalonia merged with the Kingdom of Aragon, and for the most part became a strategic naval base for the crown of Aragon. The House of Barcelona had much power over both Catalonia and the Kingdom of Aragon for around all of the Medieval era, before we entered the renaissance of Europe and a marriage between Castile and Aragon created what we know today as Spain.

Discovering the heart of Medieval Barcelona...

The Middle Ages contains many stories and legends and you will notice that with just one step into the Gothic Quarter. Its maze of narrow streets, remains of roman and medieval fortifications, alleys around the Cathedral, and towers will send you back in time and make you want to know the stories behind it all. Now it's time to go on a journey to explore every corner of this neighborhood! 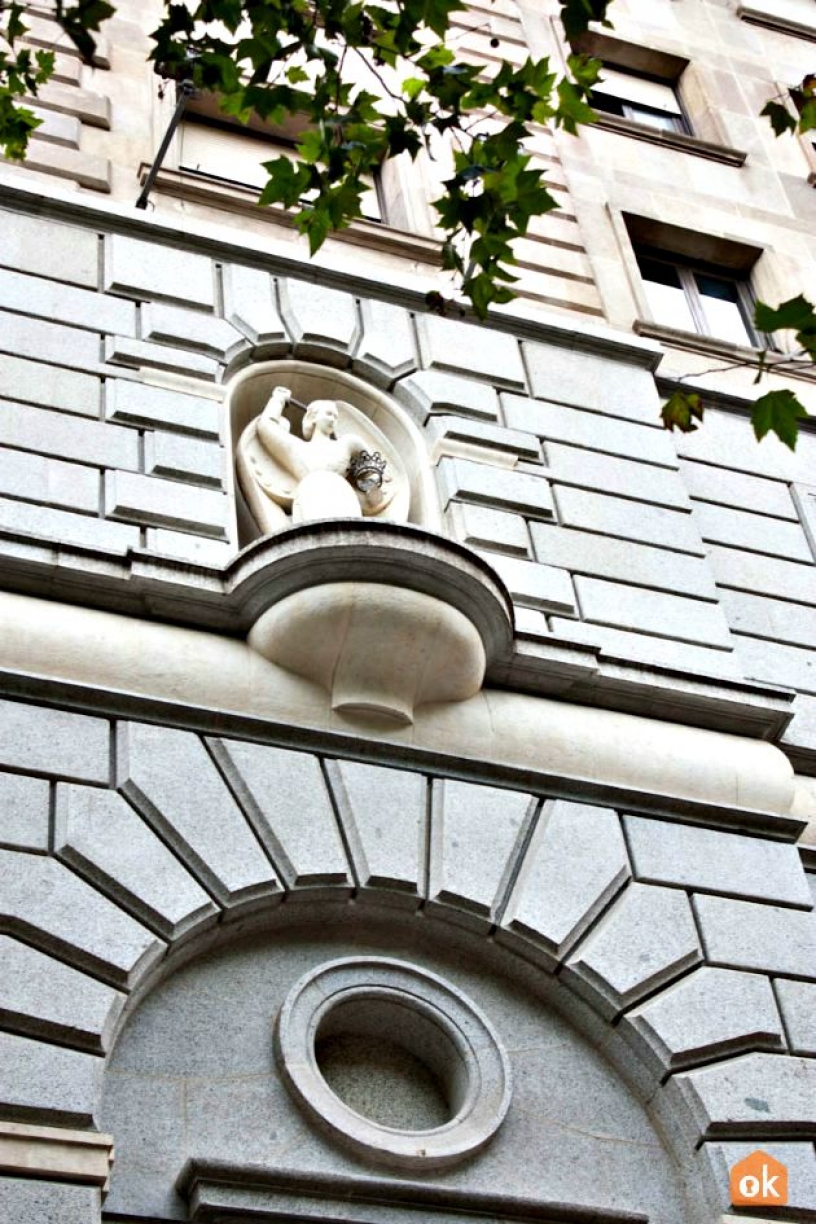 The tour begins with Portal del Ángel, an avenue with a strong history. Through the centuries, Barcelona has always been locked within walls; first the Roman wall (I-IV centuries), then the wall of Jaume I built in the twelfth century, and then the third built in the late fourteenth century.

Portal de l'Àngel was one of the 10 gates that formed part of the second wall. It was originally known as Portal dels Orbs, a gateway where the blind and impoverished used to gather around in an attempt to get some charity near Barcelona Cathedral. It was one of the first gateways that connected the city with the neighbouring town of Vila de Gracia (now part of the city) via the avenue we know today as Passeig de Gracia. It was the first door open and the last to be closed each day, making it popular amongst citizens, farmers, and traders alike.

Legend has it that in 1398, Saint Vincent Ferrer entered the city through this door and there appeared an angel. Saint Vincent asked him why he was at the portal and the angel replied. "To protect the city of Barcelona". From then on, the door became known as Portal del l'Angel and an angel-shaped statue was erected. Centuries later in 1854, the walls were demolished and the statue moved, first to the nearby church of Santa Anna, and later to Sant Àngel Custodi Church, unfortunately it was destroyed during the bombings of the Civil War.

In 1955, the sculptor Ángel Ferrant Vázquez constructed a new statue of the angel near the original site, which was placed in the side wall of the building that now houses the Bank of Spain. The statue reminds us of the legend that gave name to this place. Portal del l'Angel today is one of the most frequented parts of the city as it is beside the cathedral and is the primary entrance to the Gothic Quarter from Plaça de Catalunya and Passeig de Gracia. 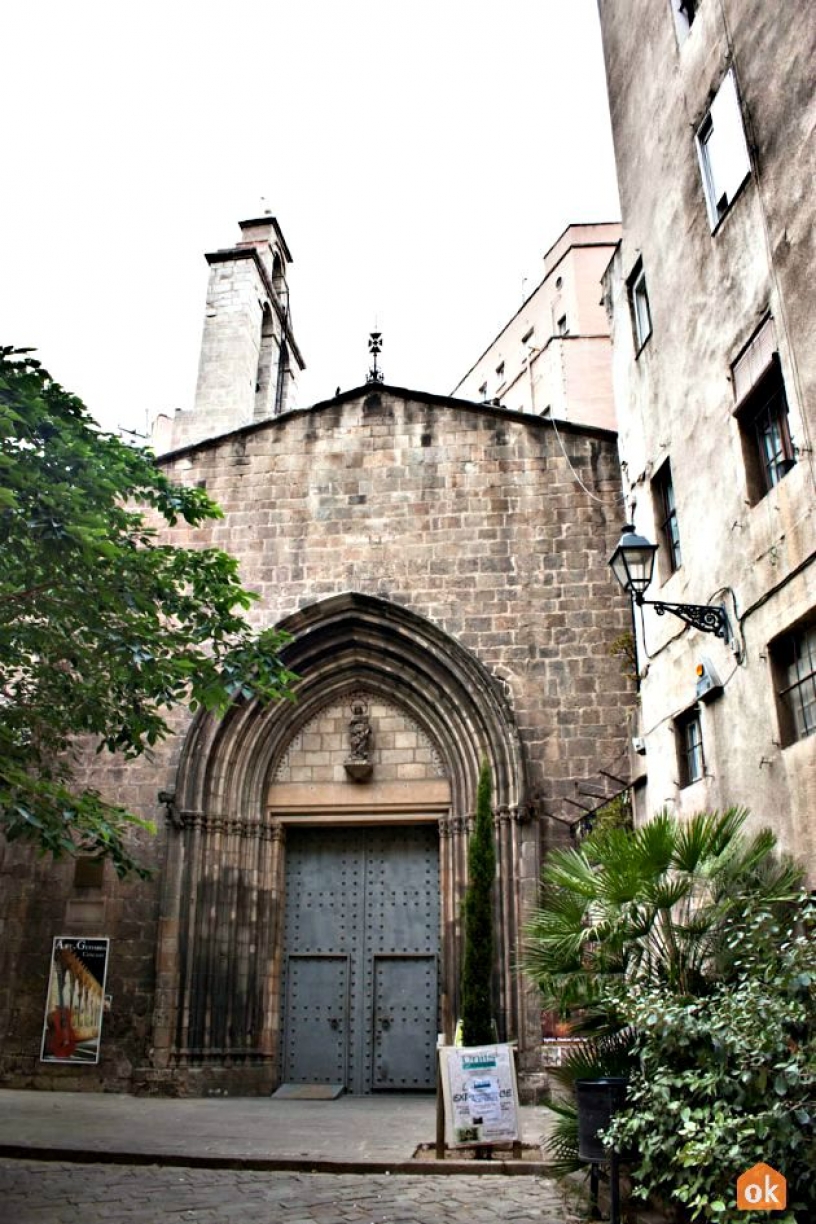 Not far from Portal de l'Angel is the Santa Anna Church and fountain. The church, which is located on Placeta de Ramon Amadeu, was built in the XII century by Order of the Holy Sepulchre monks sent to Barcelona to embolden the community. They asked the architect Amadeu to build a monastery. Construction took place over three centuries, so you can view multiple architectural styles including Gothic and Romanesque. You can also visit the cloister. 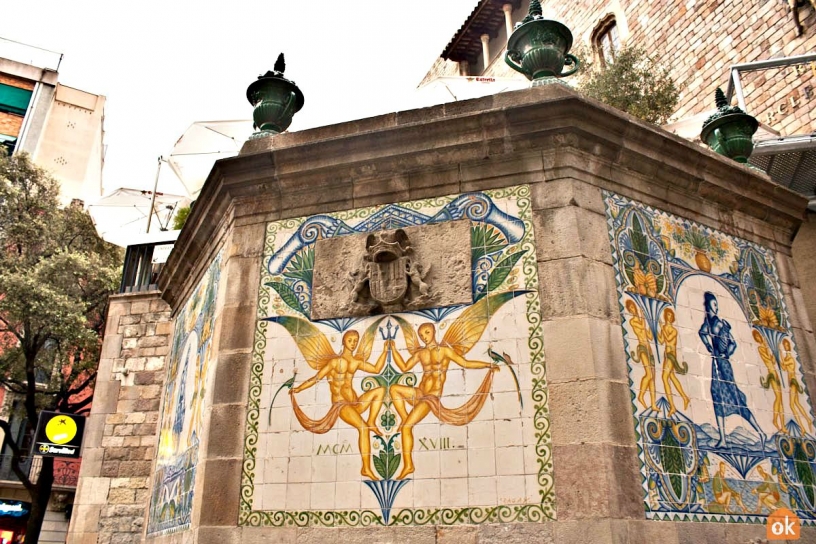 The fountain of Santa Anna is found on the corner of Portal de l'Àngel and Carrer de Cucurulla and it is one of the oldest in the city. It was built in 1356 as a trough and allowed citizens and travelling merchants to obtain water. Initially, the fountain was larger and had eight sides, but now you can see only five. Today in fact, there aren't even water taps, but still it is a favorite places for tourists who wish to sit on the edge with an ice cream or a soft drink to watch people walk past. 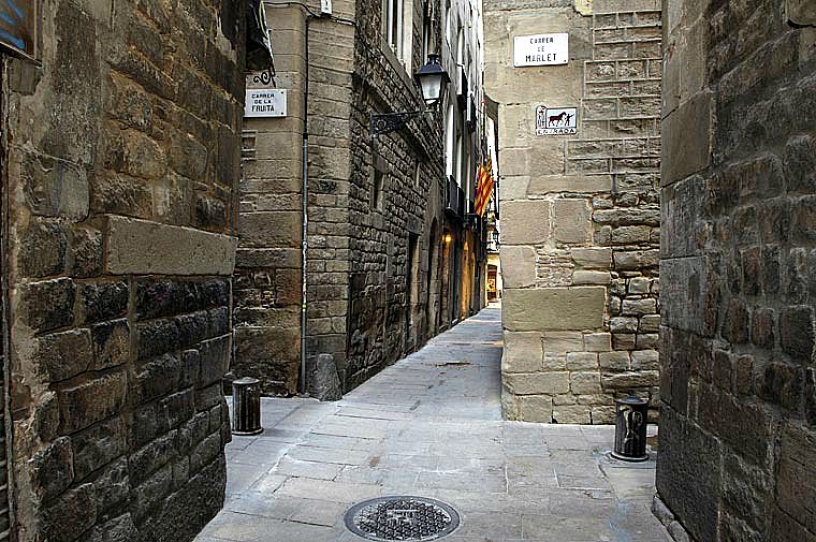 Moving along from the fountain you can venture through the streets of the Gothic Quarter until you reach Plaça Sant Jaume where you will find the Parliament of Catalonia and Town Hall. Not far from here is Carrer de Marlet and Carrer de la Fruita which form part of the Jewish Quarter. El Call Jueu was inhabited by the Jews from the Middle Ages to 1391 when due to a revolt against the Jews, the inhabitants were obliged to leave the area.

Carrer de Marlet passes through one of the three entrances to what is known as the Main synagogue. The street has had several names over the years such as "Carrer de la Sinagoga de las Donas" because there was a second synagogue where women usually went - religion requires the separation of the sexes when worshipping. Carrer de Marlet is one of the most famous streets of the Quarter and presents a commemorative plaque in honour of Samuel ben Itshaq ha-Sardi, one of the most important rabbis of Barcelona.

If you come to visit the capital of Catalonia, ​​we will help you to find the best monthly rentals barcelona. We offer apartments of different types, renovated and well furnished in all areas of Barcelona!

From Plaça Sant Jaume, take Carrer Llibreteria and come upon Plaça del Rei. This is one of the most charming areas of Barcelona, but due to its location it is a little hidden. There is a concentration of many Medieval historic buildings of which almost all form part of the Palau Reial Major (Grand Royal Palace) - once the residence and government headquarters for the Counts of Barcelona and Kings of Aragon.

Here you can take in all of the Medieval atmosphere. You should enjoy it a bit, relaxing on a terrace of a bar, perhaps sampling some tapas. You can then continue the tour and visit in this same square one of the venues of the MUHBA (Barcelona History Museum) where there is an archaeological dig located underground beneath the plaza. These ruins have recovered a significant part Roman and Medieval Barcelona. 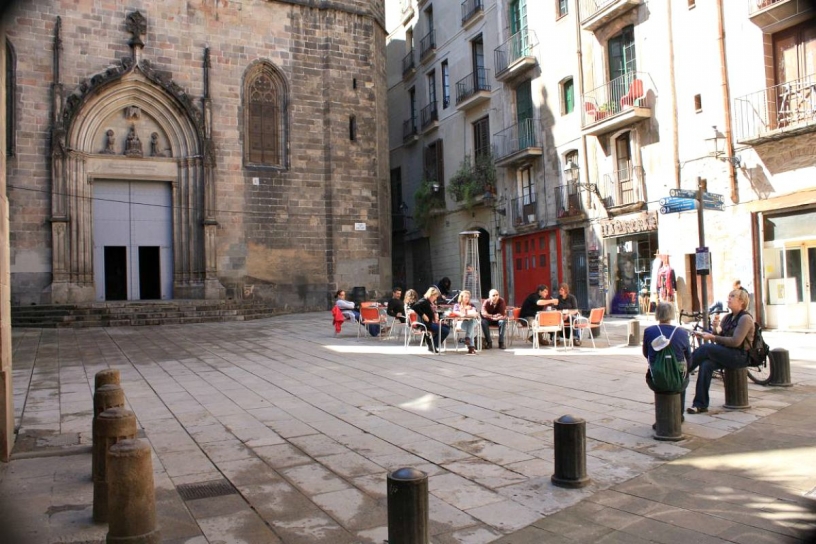 On the opposite side of Plaça Sant Jaume, crossing Carrer de Jaume I, you get to Plaça Sant Just. This square - so they say - is one of the oldest in the city (XIV century). You'll find a gothic fountain (though renovated) that is one of the oldest along with the one by Sant Anna. There is also the Basilica of Sant Just i Pastor dedicated to two children - Just and Pastor - Christian martyrs.

This church also has a curious fact, unique to Barcelona and something that remained until 1991; a dying man could go to the church and loudly proclaim his will in the presence of two other witnesses; if the witness were to swear under oath and repeat the will at the altar in the presence of a church notary or priest, it would take full legal value.

I hope you've enjoyed this trip! Barcelona is rich in history, art, and architecture, so there is always something to discover! If you are interested in more history and culture, check out the Modernist route and Picasso route! ;)