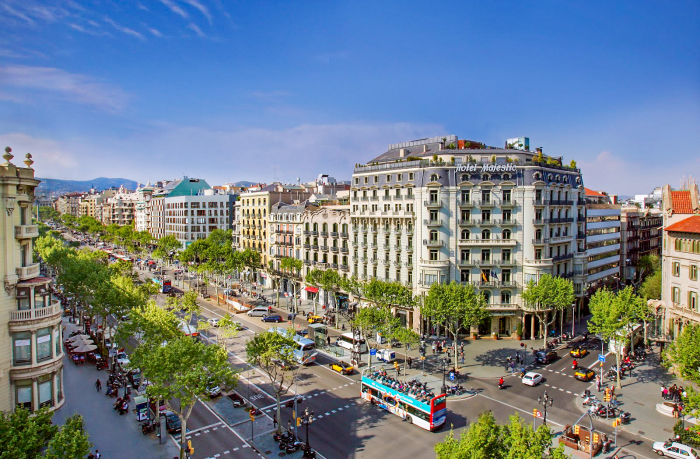 Passeig de Grácia is one of the most important and famous avenues in Barcelona. It is located in the Eixample Dret district of the city and is home to two buildings with UNESCO World Heritage status among other beautiful works of architecture. The most famous pieces are by the architects Antoni Gaudí and Lluis Domenech i Montaner, which you can read about in this article about Modernist buildings. It's also recognised as one of the best places in the city to go shopping, home to some of the most high-end shops that Barcelona has to offer, especially in terms of fashion.

This renowned avenue forms part of what's known as the "Prime Zone" of Barcelona, which has the highest concentration of businesses in the entire city, meaning many people who come to Barcelona on a business trip tend to stay in this area, take a look at the selection in this article.

Passeig de Grácia was built on top of the older "Camino de Jesus", which connected the city of Barcelona to the town of Grácia (which now forms part of Barcelona). Urbanized in 1827, the street was favoured by the aristocracy at the time and was one of the most popular places in the area for leisure and entertainment.

When Eixample -a plan to extend the city- was carried out by Ildefons Cerdà between 1860 and 1890, a residential core for the upper-class was created by replacing they multiple houses with gardens with multi-storey apartment buildings. Throughout the 20th century some of Barcelona's most influential architects left their mark on this avenue.

Whether you're a lover of art and architecture, a fashion victim, or you are just simply looking to stroll through one of the most interesting streets in the city, it's worth visiting Passeig de Gràcia.

Have you visited already? What surprised you the most? Is there another avenue in Barcelona that you like? Let us know and leave your comments, thoughts, and sugguestions below.

Other attractions in Eixample dret