#Route: A walk with the Romans through Barcelona 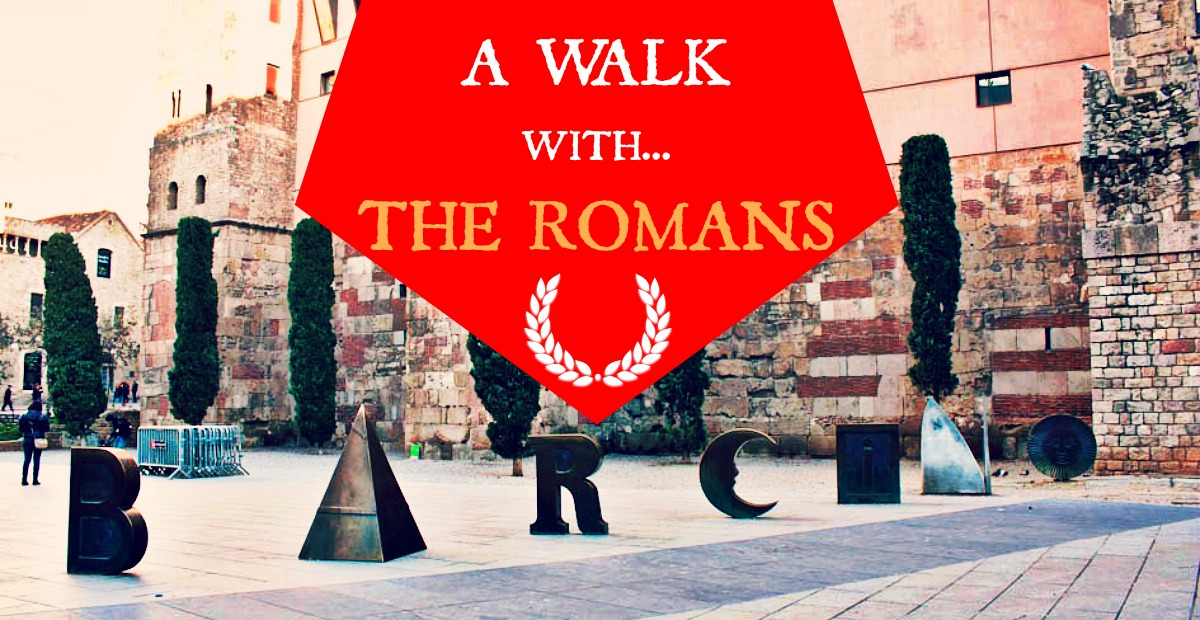 The origins of Roman Barcino are a bit confusing, but historians say the city dates back to the first century, roughly around 15 - 10 BC, when the emperor Augustus founded Colonia Faventia Iulia Augusta Pia Barcino. In fact, we can say that the current Catalan capital was prosperous, even in Roman times, it was entrusted with a key role in the imperial trade. Today you can still see some of the remains of ancient Barcino! If you like history, this is a perfect tour to introduce visitors to the Roman monuments of the city. 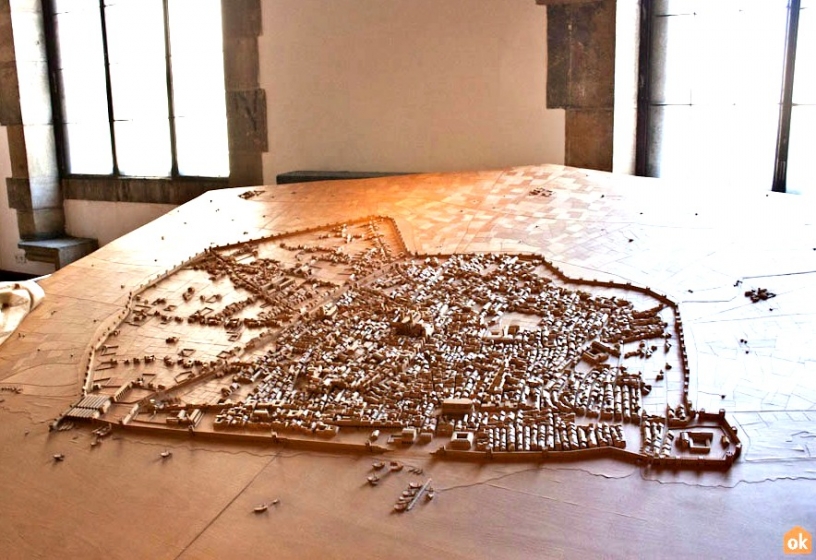 The area of Barcelona dates back to before the Roman Barcino, in fact it spans a history of about 4000 years! The area we know today as the Gothic Quarter is more or less where the beginnings of the zone as a Roman city sprung upon a small hill. Barcino had a 1.5km perimeter and an area of 12 hectares. To put that in perspective; Park Güell in the north of the city is bigger with 15 hectares.

Understandable then, that there were only just over 1000 inhabitants at the time. This urban nucleus was surrounded by a wall with 4 entrances which made of the main streets. It was eventually given the full roman city treatment, adding a temple, shops, taverns, markets, and public baths. Shops here stocked all types of goods from various mediterranean ports and the city was supplied with water through two aqueducts from river Besós and the Collserola mountains. Outside Barcino was the necropolis, where the dead were kept and which today is a part of the city at Plaça de la Vila de Madrid.

A tour of the Roman ruins of the city 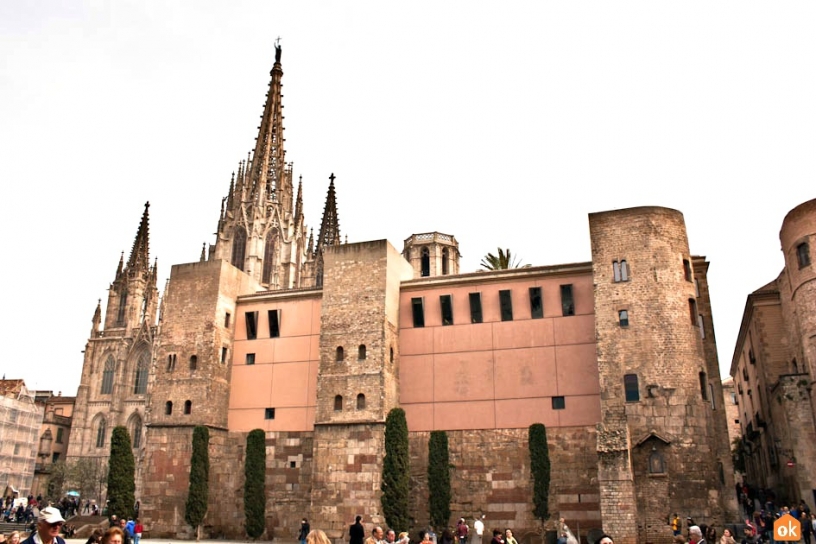 Where to start? I suggest starting your route at what was the perimeter of the Roman city: Plaça de la Vila de Madrid. Here part the aforementioned necropolis is preserved, with 95 tombs. In Roman times, necropolises were always located outside the city walls, as Roman law forbade burial within the city.

From this square, going down Carrer Canuda and Avinguda Portal del Angel you will reach Plaça Nova, the old entrance to those who came to the city from the north. Here, in addition to the majestic Cathedral, you can see two sections of Roman walls and two massive square towers that flank the entrance to the city, and also Casa del Ardiaca, which was built over roman remains in the fifteenth century. The site of the Cathedral (not the cathedral itself) also has roman origins; you can read about that here.

The entrance was located on one of the main streets of the city, now known as Carrer Bisbe, which leads to the current Plaça de Sant Jaume. Inside Casa del Ardiaca you can also see the inside of the Roman wall and two arches of the aqueducts that supplied water to the city. They went all the way north to the Collserola mountain range and east to river Besòs! A feat of engineering. 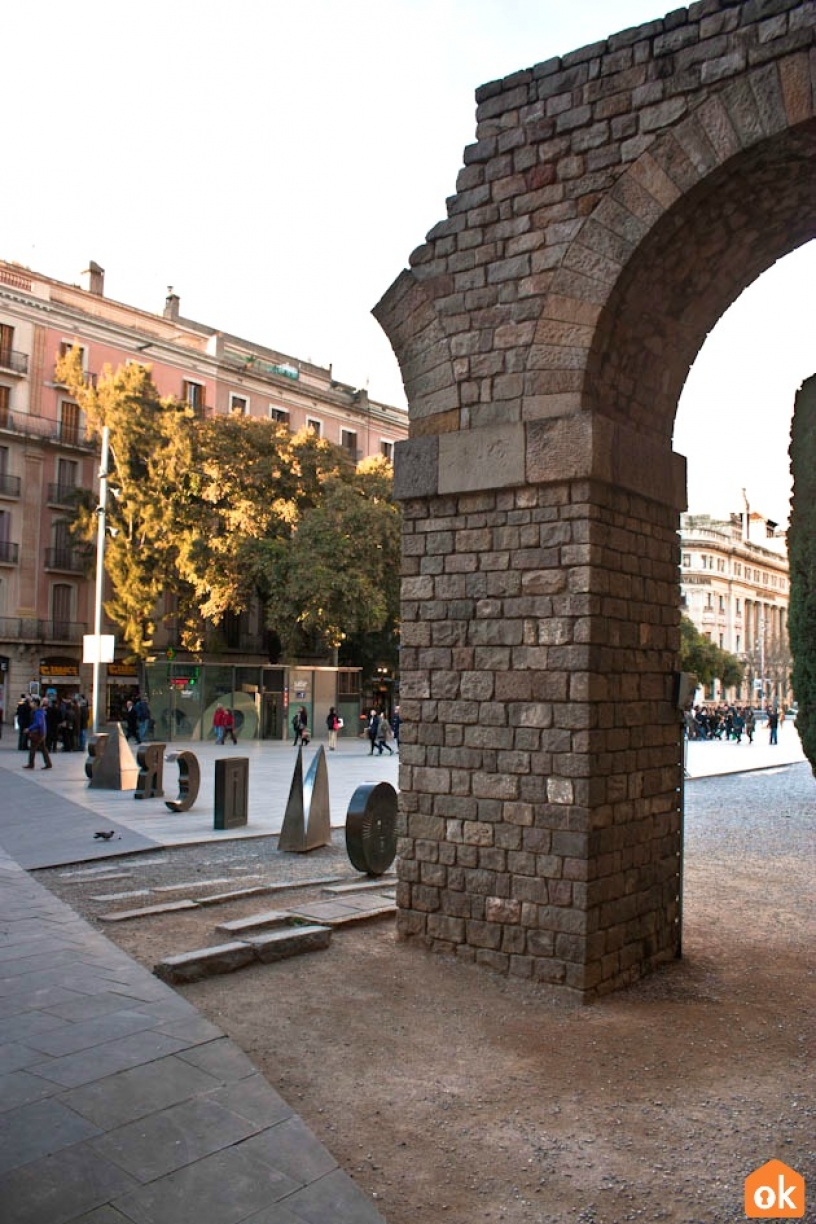 Side note: Plaça Nova has many other artistic and cultural elements that are part of the history of the city, such as the only work from Picasso made outside.

On one side of the Carrer Bisbe, is the Carrer Paradís. Here you will find the remains of the Temple of Augustus built 100 years after the city was established. The temple is located in the town square, where most public buildings were. Currently, you can see four columns and part of the podium. It's impressive to come face to face with these roman columns in a modern city! You can even see them from the apartment you're staying in! If you don't believe it then take a look at this holiday rental next to the temple. 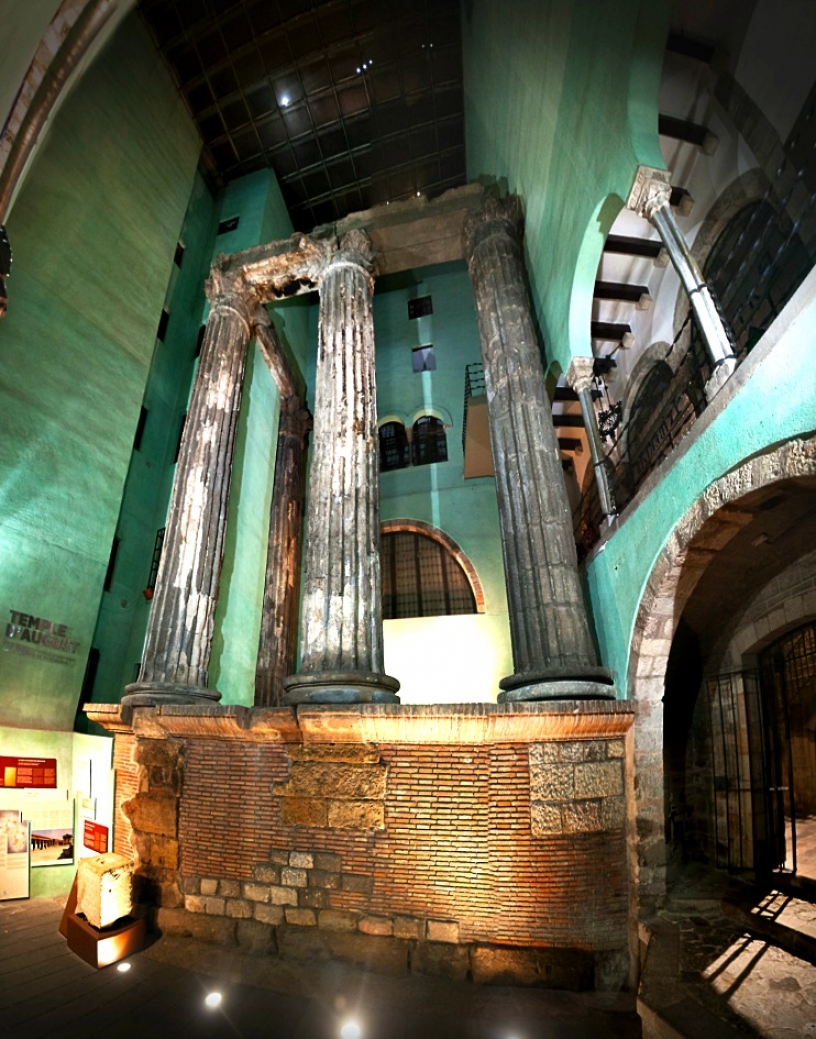 Column from the roman temple

f you want to get a better idea of the size of the Roman walls, you can continue on from Plaça Nova along Carrer Tapineria heading south-east, from where you can see the largest and well-known Via Laietana, which leads to the sea. If you have time, you can also go along Carrer del Correu Vell, which is a section of the wall with two defensive towers belonging to the second wall of Barcino, built later in the 4 AD to accommodate the need for more space.

There is one necessary stop along this tour of Roman Barcelona, which is MUHBA - Barcelona History Museum. This museum is located on Plaça del Rei, and offers visitors a wonderful trip through the ancient Roman colony of Barcino. It is a huge archaeological excavation, hidden beneath the streets that we walk every day.

Take a look at the full set of photos here on our dedicated MUHBA Pinterest board! 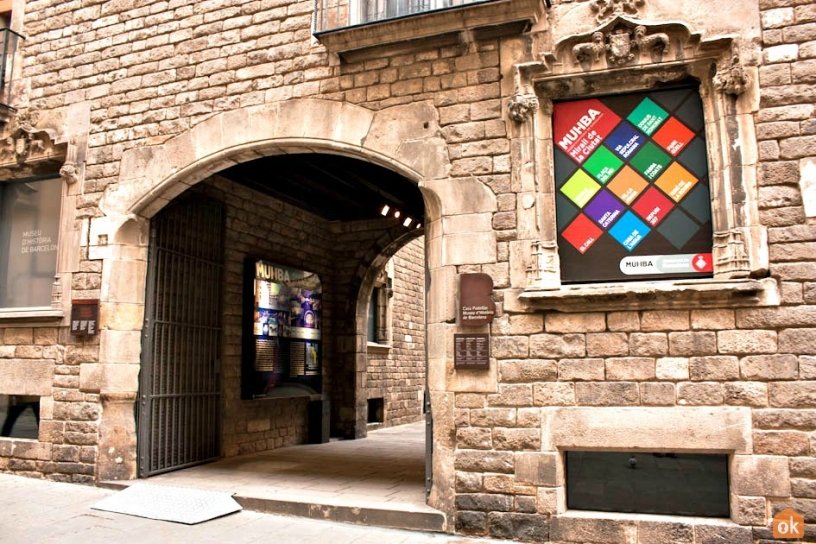 MUHBA preserves and displays the heritage and history of Barcelona, from its beginnings to today. It can be found in Casa Padellàs , one of the buildings of the monumental complex of Plaça del Rei. Here you can visit the archaeological site located in the basement of the square, with an area of 4000 m², which corresponds to a significant portion of Roman Barcelona. The preservation was declared as being of Cultural Interest, and preserves archaeological finds ranging from first century BC to the seventh century AD. 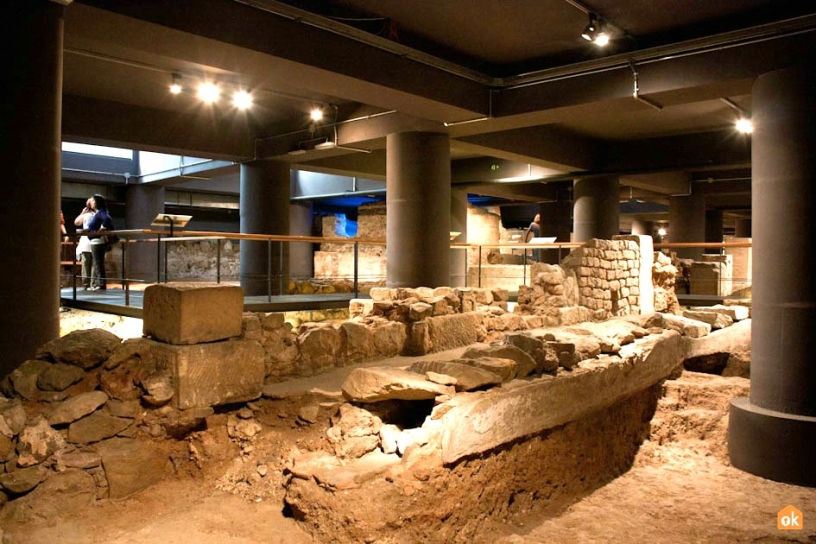 Visiting the museum takes you on a journey across 2000 years. In an underground archaeological site that allows you to imagine how the Romans lived hundreds of years ago. You can wander among the houses and streets of old Barcino, getting to know the industrial district with its workshops. You will discover how a rich Roman family lived, how cooking was made, preparing wine, and where they washed and hung clothes. You can even follow the entire process of transforming grapes. 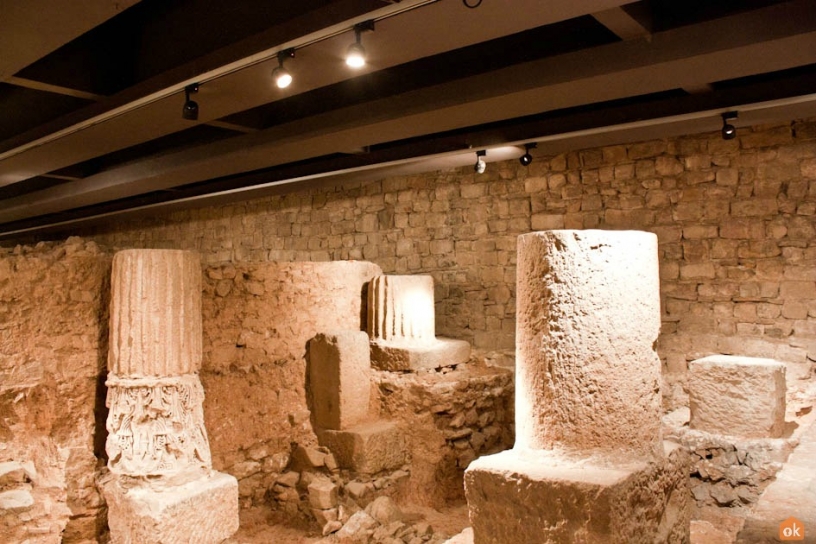 Continuing along the path, you reach the Christian quarter of Barcino, which occupied almost a quarter of the walled city from the of Episcopal Group - one of the best preserved of the peninsula. There you can visit the various buildings for Christian worship like the baptistery from 4 AD, where the first Christians were christened; the reception room of the bishop from 5 AD, Bishop's Palacefrom 6AD and a church.

At the Royal Palace there is A permanent exhibition on Barcelona during the Middle Ages (8th - 13th centuries). Through parts of this collection, you can learn about the transition from a Roman city to the birth and formation of a Medieval city, eventually leading to the city's transformation into the capital of a Mediterranean empire, with its growth and strengthening leading to what we know as modern Barcelona today. You could even follow up the visit by continuing with our Medieval route!

In addition to the museum, MUHBA has various spaces and exhibits around the city. Visit their pagededicated to Barcelona's heritage sites. The museum also organizes guided tours, informative sessions for schools, and thematic itineraries with audio guides to help you discover the best of Roman Barcelona.

All that's left is for me to wish you a fantastic trip along this route to discover Roman Barcelona!