Short History of the Sagrada Familia

All about the past, present and future of the Sagrada Familia

The Sagrada Familia is a symbol of Barcelona. Two million visitors pass through its doors every year, some people visiting Spain for the sole reason of seeing it. In this article we tell you the history of this unfinished basilica, set to be complete at the end of 2026, or at least so the current lead architect reckons. You'll also see photos and videos of how the building once looked, and how it will look once it is completed. You can stay in one of our long term rental in Barcelona and live near Gaudi's masterpiece.

The instigator of the construction of the Sagrada Familia was Josep Maria Bocabella i Verdaguer, a devoted and very cultured bookseller who in the year 1866 founded "The Spiritual Association of Devotees of Saint Joseph". This entity collaborated in the dissemination of Catholicism at the time of the Industrial Revolution promoting the conservative ideology.

Mr. Bocabella visited the Holy Father of Rome in 1872 and on behalf of the Association gave a silver image of the Sagrada Familia. On his return he visited the town of Loreto, where he was inspired to design an expiatory temple. This was not very successful and the Association commissioned the architect Francesc de Paula y Villar to build a temple that was not the servile copy of any other.

In 1881 they acquired the land limited by the streets of Mallorca, Provence, Marina and Sardinia with a total area of 12,800 m2 for a price of 172,000 pesetas (1,034 €). The work began following a conventional neo-Gothic style and on Saint Joseph's Day in 1882, Bishop Morgades laid the first stone. 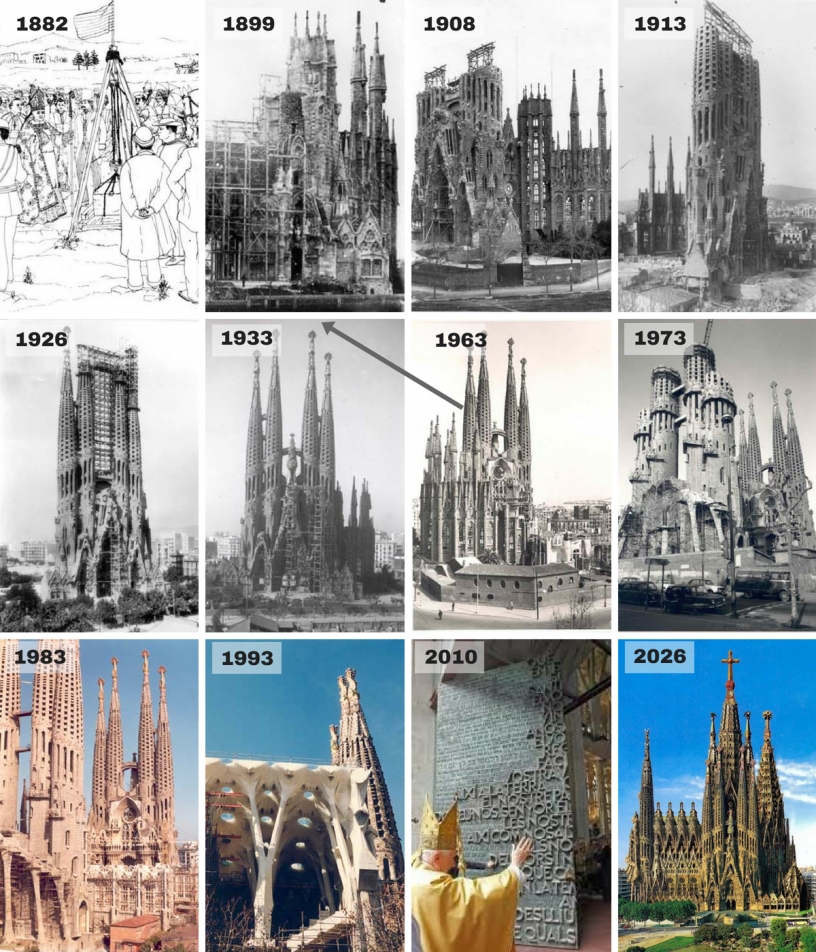 In 1883, Gaudí took over the project and transformed it according to his new architectural style, combining the Gothic with his own forms of Art Nouveau. So the true style of the church as it is today began with the intervention of Gaudí in 1883.

Gaudí added a pit around the crypt that had already been started so that direct light could enter and ventilate naturally. In addition, Gaudí modified the capitals, which caused the dispute with Villar. From here, Gaudí reconsidered the entire project and developed the idea of ​​a grandiose temple with a Latin cross plan in which he deposited all his architectural knowledge.

In 1892 the foundations of the Nativity facade, the cloister and the window of the north transept begun. The construction of Portal del Rosario was completed in 1899. He did three studies of the Passion facade, but he did not make the model. Gaudí also made the calculations of the domes, but not the complete study. As for the Glory facade, he only created a model and a detailed study of the imagery.

The photo at the head of the article shows the Sagrada Familia neighbourhood in 1915, and more or less that was the aspect that the church had when Gaudí died in 1926. The architect dedicated his last years to the complete study of the interior of the basilica with models to scale 1:10, with columns, vaults, windows, roofs and facades of links between portals. His death was a real disaster for the continuation of the project. From then on the construction progressed very slowly and depended almost entirely on donations.

The works after Gaudí

After the death of Gaudí his assistant architect named Domènech Sugranyes was in charge of the directing the construction work. In 1930 the construction of the rest of the bell towers of the Nativity facade finished and shortly after, in the years 1933 and 1935, the central cypress and the portals of the Faith (right) and the Hope (left).

In July 1936 the Spanish Civil War began. During the war, there was little progress on the project. Construction accelerated in the 1950s and today much of the church remains incomplete. I will now tell you the stages of construction after the fifties:

Architecture of the Sagrada Familia

In this article we analyse the interior and exterior of the Sagrada Familia. We will tell you all about the extraordinary architecture of Gaudi's basilica: its naves, the altar, the columns, the 3 facades and the towers.

According to a study by the Barcelona City Council, 80% of the tourists who go to the Basilica only admire it from the outside, but if you want to discover the Sagrada Familia inside I suggest you read our article about the tickets and possible discounts for the Sagrada Familia:

The Future of the Sagrada Familia

When will the construction of the Sagrada Familia be completed?

There are many doubts as to whether the construction will really finish in 2026. This year will mark the centenary of the death of Gaudí and he wants to celebrate this anniversary by finishing the Sagrada Familia. If you want to find out whether this completion date of the Sagrada Familia is realistic or not, check out this article: