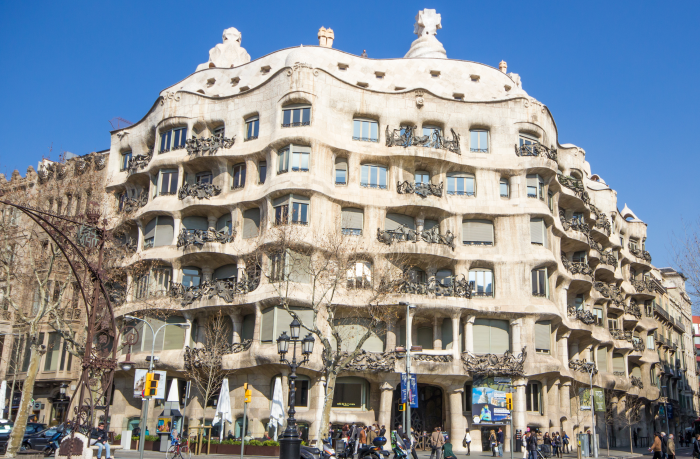 Casa Milà or La Pedrera? Either way it's a unique project by Gaudí.

Casa Milà, or more affectionately known as La Pedrera, was built as a bourgeois apartment block that today is one of the most important cultural centres in Barcelona. La Pedrera was built between 1906 and 1912 under the guidance of Antonio Gaudí i Cornet in response to the whim of the industrialist Pere Milà and his wife, who saw the similar Casa Batlló built on the same road, and basically "wanted one" for themselves! They wanted a building from which they could rent out the apartments. The project was not without setbacks however, it was delayed for breaking various ordinances of the city, which modified the artistic intent of the original design slightly, though Gaudí made the best of it as he could.

Though Gaudí worked on the project until its completion, he had some differences in ideas for the interior, which led Gaudí to abandon the artistic direction of the building in 1909. Since the 1920s, various modifications have been made to the interior. In 1984, UNESCO declared the building a World Heritage Site. Two years later, the building passed into the hands of Caixa Catalunya, where it has since remained. They have made the building the headquarters for the 'Fundación Catalunya-La Pedrera'. The attractions is specially adapted for visitors with hearing impairments.

The modernist movement was deeply inspired by Art Noveau, a style that borrowed many of its ideas from nature. La Pedrera is no exception and even the name itself comes from the fact that the façade resembles a quarry. The lack of colours make it seem more sober than Guadí's other designs, but the forms and patterns bring the idea to life. It is one of those buildings that simply defines Catalan modernist architecture.

Discover this cultural building with intimacy

There is also a service that will help you to skip any queues via a VIP entrance, there are other monuments around Barcelona that offer a similar service and you can read about them here.

Other attractions in Eixample dret