Stay in a beautiful Modernist building in Barcelona 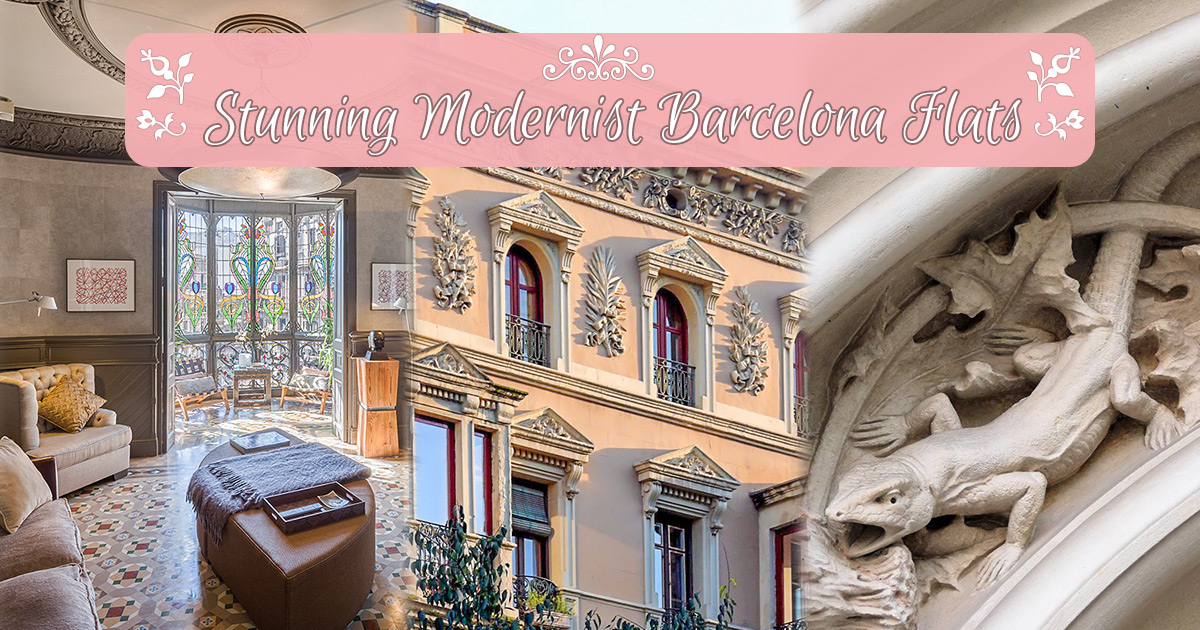 If you had to pick just one architectural style to represent Barcelona, it would most definitely be Modernisme. It coincides with the sweeping European architectural changes at the beginning of the 20th century, sharing similarities with the English Art’s and Crafts, and French Art Nouveau movements. The idea was to use art to change society and is characterized by the use of curves instead of straight lines through wrought iron balconies, asymmetry, colour, and a rich decoration of floral patterns and organic designs. They’re charming buildings both inside and out, which is exactly why you’ll want to stay in one! Here is a selection of modernist apartments in Barcelona: 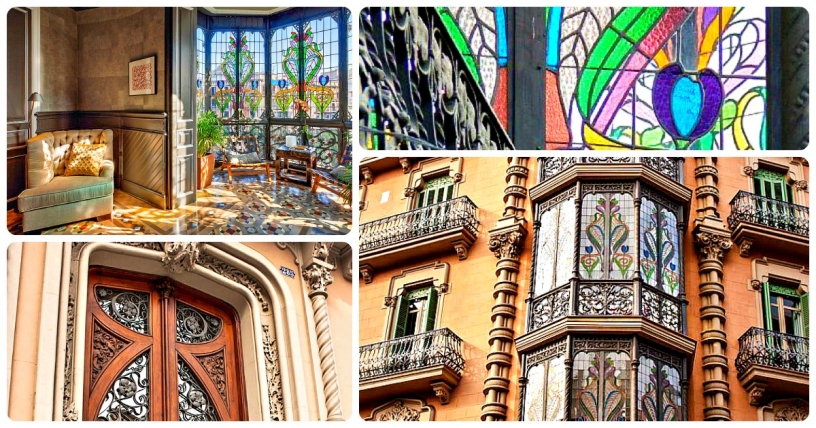 Not one or two, but a choice of three ways to stay in this beautiful modernist building. Casa Jaume Forn, by Jeroni Granell i Barrer and Domènec Boada is located only 2 blocks from Passeig de Gracia, it’s in one of the most exclusive parts of the city.

Everything about the accommodation here says modernist, from the tiled colour flooring to the floral adornments across the ceilings. The building dates back to the turn of the century (1904), but has undergone many renovations so you would never know; all you need to do is admire its style. One thing that has remained the same are the beautiful colourful stained glass bay window, something very typical of these graceful buildings.

All of these apartments feature in our selection of luxury apartments. 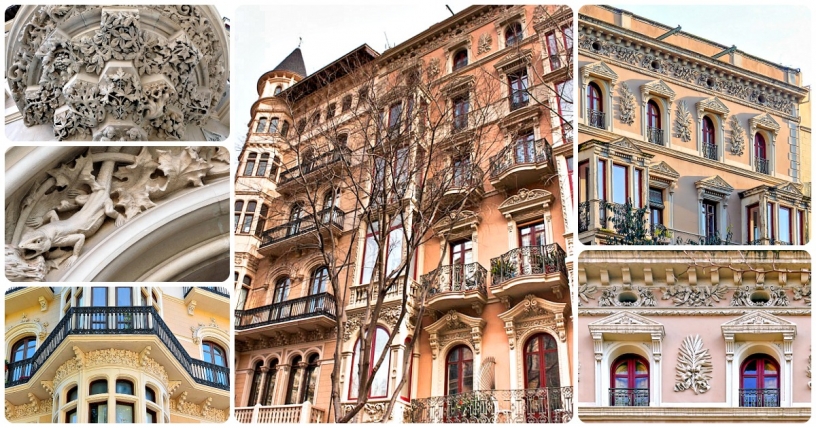 Two modernist buildings side by side - Which will you choose?

Another 1900 beaut that doesn’t look a day older than its contemporary counterparts. Casa Josefa Gil is by Modest Fossas i Pi… It’s the most typically modernist in the list, with amazing detailed flower adornments and a classic pastel-painted facade. You can also stay in the beautiful modernist building next door to the left that is equally as impressive. From here you have a view of the “Eglésia i Convent de les Saleses” - a dazzling church completed in 1882 that combines Neo-Gothic, Romanesque, and Mudéjar styles; it’s one of the masterpieces of Joan Martorell i Montells whose protégé was none other than Antoni Gaudí himself.

Martorell taught Gaudí many innovative techniques, put him in touch with Eusebi Güell, and even headed the committee that selected him to take over the Sagrada Familia project in 1883 … Wow… 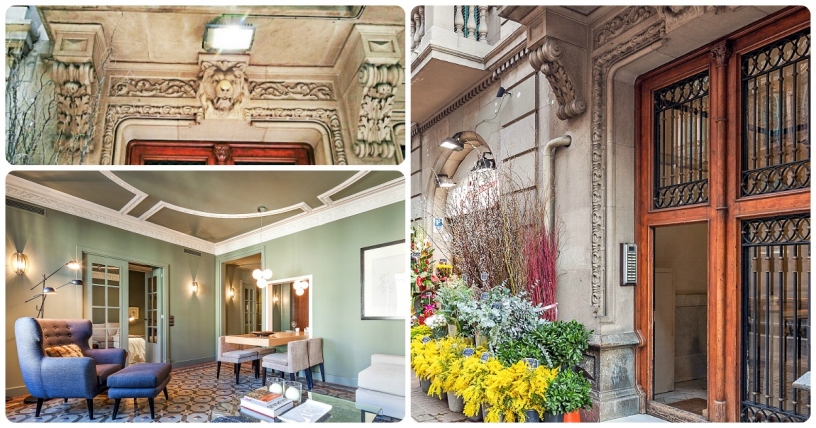 The lion welcomes you to Valencia Bruc

A fine example of modern interior design meeting modernist architecture, with many of the walls coated in a calming olive green finish while leaving the original modernist details accented in white. For an extra bit of appeal, the lovely modernist entrance to this building is flanked by a florist and their display of flowers, as well as a charming bookstore that had to change its name to Jaimes during the Franco years because "James"was too English...

Interestingly enough, although the neighbouring building to the right looks identical in every way, it was actually built 20 years later in 1920. This "style-matching" isn't a one off case though and was practiced throughout the city. 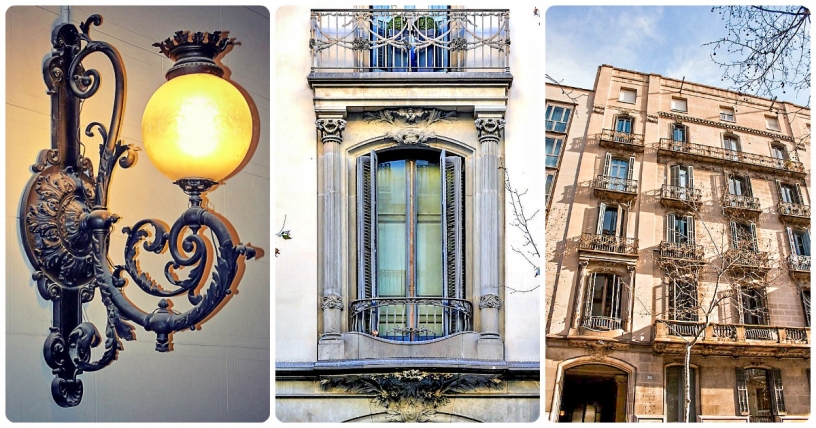 There are three wonderful apartments in this modernist building called Casa Camil Maria Julià i Vilar, by architect Enric Sagnier i Villavecchia, built in 1909 before he abandoned the modernist style. He is the same architect responsible for the church that you see in the distance overlooking Barcelona from atop Tibidabo (Temple Expiatori del Sagrat Cor).

The interiors have been completely renovated, so there are no clues to its modernist past inside, but you can see plenty from in front of this marvelous work. 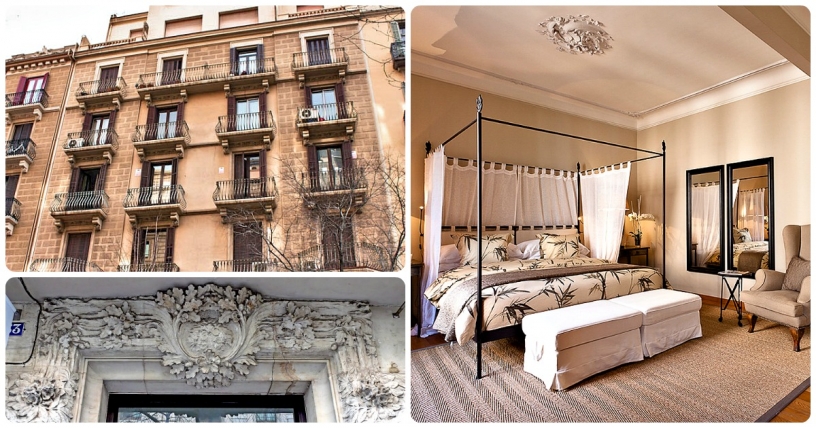 This is one of the later examples of Modernisme in Barcelona, moving into the Noucentisme style, built in 1930. The biggest giveaway that despite being built after the modernist era it still maintains the style, are the curved wrought iron balconies and that it was made to match the style of its neighbouring building that was built at the end of the modernist area (Casa Rosa Vilar, by Enric Sagnier i Villavecchia - lower left in above image).

It's the clearest example of the transition from Modernism to Noucentisme, because while you have the basic style imitated, many of the floral adornments which fell out of fashion are missing! The designer who renovated the interior made sure to preserve original features like tiled flooring and ceiling adornments. It's a blend of contemporary luxury and modernist charm.

So, 5 stunning modernist buildings to stay at in Barcelona… But only one you! What a dilemma, no? Well, these charming buildings get plenty of bookings simply for their character alone, so better make a decision fast ;)

The photos in this article where taken by Martina Vitali - The Photographer of Dreams and Arnim Schulz who has an amazing flickr collection of Barcelona Modernist buildings that you should definitely praise him for! Simply astounding. Thank you Arnim.

Looks like Larry is having trouble deciding too...
© OK Apartment Barcelona