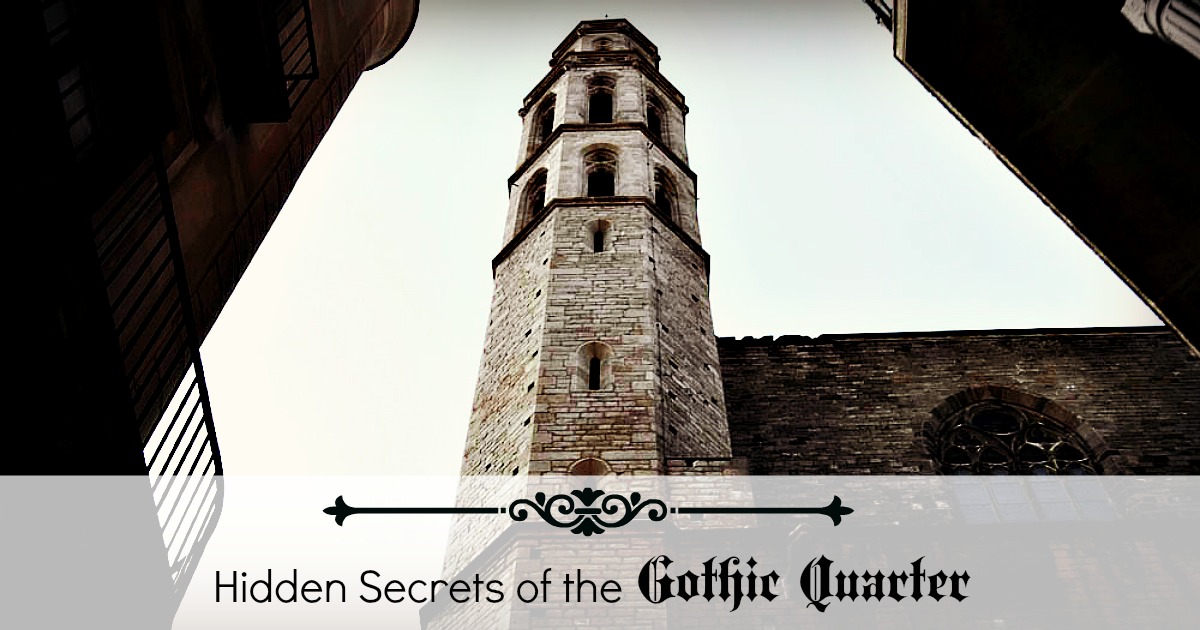 Barcelona is a touristic city and with lots of its monuments known internationally. One popular place is the Gothic Quarter of the city, and while it does draw in crowds, there are many spots that you can discover unbeknownst to the influx of visitors. Dive in up to your nose in history and culture as you discover the winding streets of this area and its hidden gems.

As one of the most visited cities in Europe and with many touristic attractions that bring in tourists from the world over, Barcelona can sometimes come to suffer from overcrowding. One may find places that in order to enter, you'll need to wait in a long queue... Of course there are other spots in Barcelona that deserve your time and are much less populated by fellow travellers yet are full of cultural and artistic interest. You'll find many of these places in the Gothic Quarter, with its abundance of historical churches, so getting down to this neighbourhood is well worth it, here's how to visit this part of Barcelona and discover the places many other tourists do not.

The Basilica of Santa María del Mar is definitely the most popular of the attractions you're about to see, but despite this, a lot of tourists fail to put this building on their itinerary, even though it's a perfect representation of the true Catalan Gothic style of architecture. Throughout its long history it has suffered a numerous amount of attacks and catastrophes, yet it still stands. A curious fact: fragments of its history are reflected in the famous novel The Cathedral of the Sea. Of course, many authors write about the Gothic Quarter too, for example you can discover the Barcelona of Carlos Ruiz Zafon

Not as visited perhaps as the main Cathedral, but equally impressive. I highly recommend it for its stained glass windows if nothing else. They are amazing.

Grandiose, which fits so well with all that is Barcelona. A true representation of the epochal importance of the Catholic Church during the Medieval and Renaissance periods. Another MUST SEE

This beautiful 14th century cathedral is an architectural wonder. Take the time to visit and experience as part of your Barcelona wanders. And yes, this is the same cathedral described in the book ...

This baroque church is located in the solemn square of Plaça de Sant Felip Neri. It is a living testament to the horrors of the Civil War that tore Spain apart, as a large portion of the church was hit by air strikes from Franco and 42 people died mostly school children. Today you can still see the impact that the bombs had on the building, and depending on the time you visit, the children from the same school will still be innocently playing in front of this building... As if nothing ever happened...

It's also the location where the gothic metal band Evanescence shot their music video for My Immortal.

3. The Jewish Quarter of Barcelona

One part of the Gothic Quarter is known as the Jewish Quarter, with lots of history and classical architecture of the Jewish neighbourhoods. Through the narrow streets you definitely need to visit the old synagogue that has been restored and open to the public for visits.

This church of romanesque and gothic style. It's surprising how quiet it is inside despite of its proximity to Plaça de Catalunya and the highstreets in the area. The church hosts various concerts and promotes the work of religious figure sculptors.

5. Remains of a temple dedicated to Augustus Caesar

In the Gothic Quarter one of the oldest hidden gems that can be found in the city, all the way back from when Barcelona was called Barcino. The temple has crumbled with the passing of time, but some of it has been preserved like the columns and remnants of the temple that was used by visitors to worship the Roman Emperor. But pay attention, because out of the three columns on display, two are authentic and one is a reconstruction. Can you guess which one? You can uncover more roman remains in Barcelona (known then as Barcino) through our Roman route guide.

Located on the plaza of the same name, this is a Baroque basilica that was built at the end of the 18th century atop of an old Medieval church. It is dedicated to the Our Lady of Mercy, the patron Virgin of Barcelona. It used to be a convent, but it was seized and become a school, before coming a military captaincy.

This square is located in what was the city centre of Barcelona before it expanded beyond the old city walls. It's also where the Parliament building for the Catalan government is located (Palacio de la Generalitat) alongside the headquarters for the city council (Casa de la Ciutat). It wasn't until the 19th century that a square was constructed, of course, it didn't remain the central square for long as Barcelona rapidly expanded just decades later. It's a location where many local cultural celebrations take place, and if you can find your place in the crowds then it's worth a visit during the Mercè festivals to see the famous Castellers perform their feat of making a human tower.

Literally meaning "The King's Square", this was the location of the livestock pen for the Palau Reial Major, a residence for the counts of Barcelona and Kings of Aragon. The area is surrounded by Gothic and Renaissance buildings, for example Santa Ágata Chapel, Lloctinent Palace, Casa Padellás, and el Tinell with its tower called the Mirador del Rey Martín.

Located close to Las Ramblas, it's a Neo-Renaissance square from the 19th century with a strange shape. It was built in order to connect the old Medieval streets. The lamps that you can find in the centre of the square today are by none other than the famous Catalan architect Antoni Gaudí, as one of his earlier projects. The square is also well known as a place to visit for bars with terraces that you can chill out on for a good time with friends.

The Placa Reial is a beautiful square in Barcelona. There are many shops and restaurants surrounding the square. The palm trees give it a very tropical feel and is a wonderful place to wind down.

Located in a Neo-Gothic building, it was opened as a local inn in 1897 inspired by the parisian local Le Chat Noir. It was constantly frequented by artists, and the location of many social gatherings, music and literature meetings, puppet shows, and exhibitions, like one of the first from Picasso when he was a young man. Today it operates as a bar and restaurants, but with a different approach. A section of the film Vicky, Cristina, Barcelona by Woody Allen was filmed in this café. This location forms part of our free to follow Picasso route in Barcelona... Check it out!