The 5 best areas to stay in Barcelona

Barcelona is divided into 27 districts, with something for everyone. We made a survey on what expats like most about this city, with one of the questions being "Which is the best neighbourhood to live in Barcelona?". In this article you'll find out the results of this survey as well as videos of these five best places to stay, comments from expats, and more information about the neighbourhoods themselves. If you're coming for holidays, take a look at out list of apartments where to stay in Barcelona, including in the neighbourhoods mentioned in this article.

Which are the best areas to stay in Barcelona? — Infographic

According to our survey, the best locations to stay in according to migrants who have moved to Barcelona are: Gràcia (18%), Poblenou (10%), Sarrià - Sant Gervasi (9%), Born - Sant Pere (9%), and Eixample Dret - 8% + Eixample Esquerre 8%, as the demographic shows below. 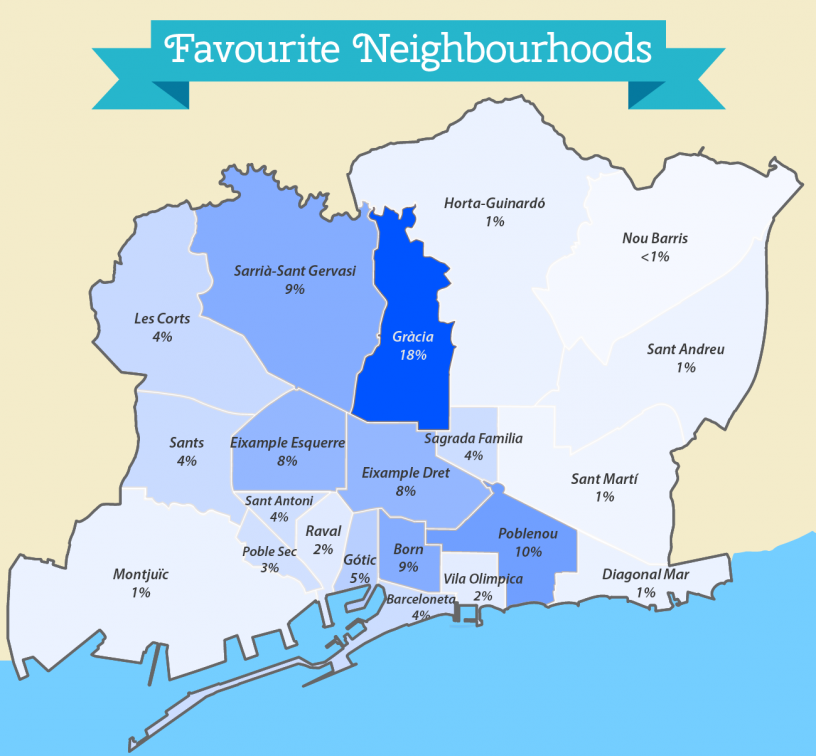 The best areas to stay in Barcelona, according to migrants.

If you come to live in Barcelona and need you an apartment, you can rent a room or an apartment for days but the best solution is to book monthly rentals. Finding a definite apartment requires a certain dedication, it is not easy and can easily take a few months. Enter your monthly period in our long term rental search engine in Barcelona.

If you wonder where to stay in Barcelona, Grácia is an excellent choice for anyone who wishes to experience an authentic Barcelona lifestyle amongst the Catalans. Here you'll find an endless supplies of bars and restaurants, as well as designer shops, small boutiques, and attractions like Park Güell. Gràcia is a mish-mash of all Barcelona has to offer in one area and you will find are cheap places to stay and larger than in the centre. We have a long list of monthly rentals in Gràcia in case you choose to stay here.

Comments about Gràcia from people who live in Barcelona

"Neighbourhood with nice atmosphere, a lot of cultural life day and night. Alternative stores. Little traffic as many streets are one-way." / "It is a neighbourhood that has nice architecture and an atmosphere of a small town in the centre of a metropolis." / "Because it is a very cozy and local area, where you will find the real local culture with a lot of small bars and shops, without tourists." / "It feels central despite not being in the city centre - there are good transport connections. It's full of bars and shops. / "A district with everything you could possibly need that still retains an authentic feel in most parts."

Video presentation of the Gràcia neighbourhood

The formerly industrial area Poblenou in the Sant Martí district, is the best location to stay in Barcelona for 10% of expats. It's an area transformed with penthouses and skyscrapers like Torre Agbar, in addition to golden sand beaches within a short walk. Rambla del Poble Nou remains authentic, featuring futuristic and modern architecture being more and more developped, keeping the original soul with buildings like the Vila Casas Foundation and the Museum of Music. If you'd like to stay in this zone, we have a list of apartments to rent in Poblenou.

Comments about Poblenou from people who live in Barcelona

"Clean neighbourhood. Open spaces, beaches, and places to park." / "Authentic, family-friendly, close to the sea, not far from the centre" / "Not in the city centre so less noisy, close to the beach, many amenities" / "Close to work and beaches."

Sarrià - Sant Gervasi, scored a little higher than Born, though both had a 9% share of the survey despite their differences. This district is a peaceful residential area with an authentic vibe and many green areas like gardens and parks, it's a very beautiful and natural environment where to stay in Barcelona. Architecture here is elegant and mostly neoclassical, similar to central London. There are decent transport options that go directly to the city centre - Plaça de Catalunya, so if you want to stay here, take a look at our flat rentals in Sarrià - Sant Gervasi

Comments about Sarrià - Sant Gervasi from people who live in Barcelona

" Just outside the centre but quiet and secluded. Buildings are in good condition and lots of green areas." / "There's less traffic." / "Compared to other districts, it's safer." / "Calm but not too calm. Safe..." / "The neighbourhood has everything and is peaceful." 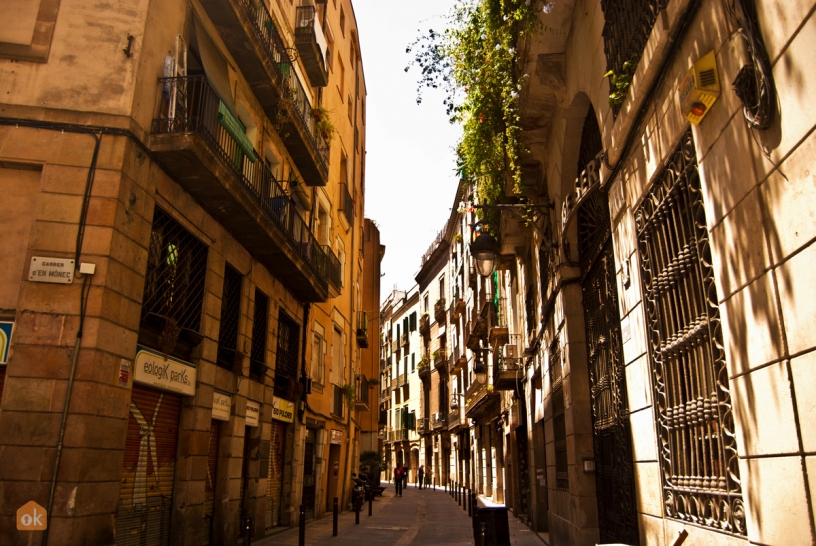 Born is the best place to stay in Barcelona regarding to the different "old city" districts of the city, easily topping the Gótic, Raval and Barceloneta areas. Unlike Sarría - Sant Gervasi, which had a similar score, Born is a more lively area to stay that has been gaining popularity since the 90s. It's here you'll find little streets with many locally owned shops, restaurants, and places of interest. The Born area is well-connected and due to its old city location you can certainly walk to everything important, including the beach, in just a few minutes. For those looking to stay here, check our apartments to rent in El Born.

Comments about Born from people who live in Barcelona

"I like the areas made lively by people and the architecture is pleasant." / "It's the most beautiful district" / "It has small stores, lots of squares, and good restaurants. Close to the park and the sea." / "Restaurants, great vibe, and great places" / "Nice cosy neighbourhood."

Video presentation of the Born neighbourhood 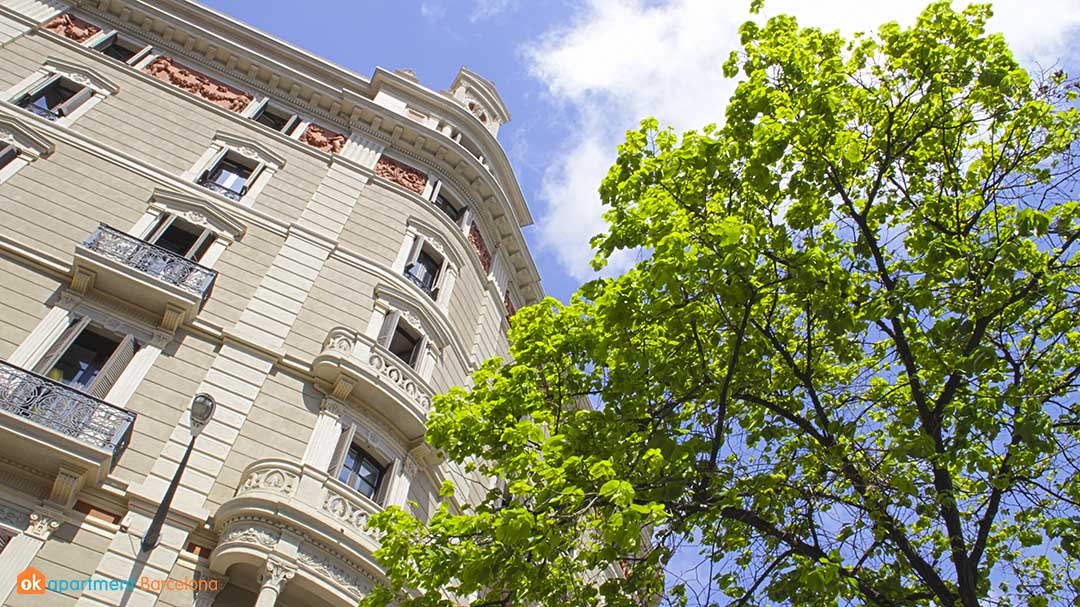 The Eixample district is made up of two neighbourhoods - Eixample Dret and Eixample Esquerre. Both of these neighbourhoods scored 8% in the survey of the best areas where to stay in Barcelona. This district is known for its large number of important attractions, like the houses designed by Antoni Gaudí along Passieg de Gràcia. In 1860 this district was designed by Ildefons Cerdà as an expansion of the city. You will find a lot of modernist style buildings here, neatly laid out in blocks. If you are looking to stay in this area, the district is divided into two main neighbourhoods where you can fin an apartment in Eixample Dret or Eixample Esquerra

Comments about Eixample from people who live in Barcelona

"It's a central part of the city but far from the chaos of the old city." / "It has an incredible range of clubs and supermarkets and is more beautiful than the other districts."

"It is a quiet and very local neighbourhood without many tourists." / "It's central but not saturated with people"

Video presentation of the Eixample district

Barcelona is the city for everyone. No matter which area you choose to stay at, in the centre, uptown or next to the beaches you'll always have an unforgettable experience. So, go ahead - pick one.

Map of points of interests mentioned in this article