Why are there so many dragons in Barcelona? 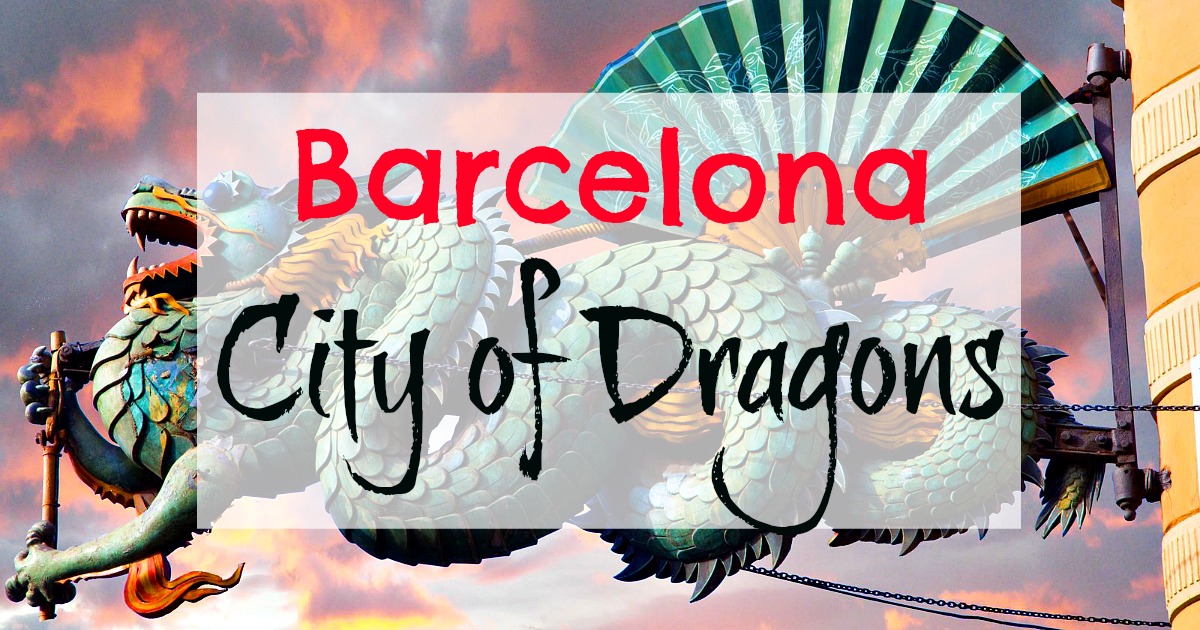 When Sant Jordi killed the dragon and rescued the princess...

Depending on the culture, the dragon is a figure that can represent good - like a Guardian; powerful and wise, but it can also represent evil - a merciless monster with insatiable hunger. In Barcelona you will find 400 examples, some with wings and large jaws and claws, and others that look less threatening, without legs or wings. Even entire buildings... But what is the history behind it? Let's find out!

St. George and the Dragon: This is one of the most famous legends in Catalonia and of course, England too! Like England, the country of Catalonia also shares Saint George as its patron since 1456. Though there are no historical sources that actually prove his existence, references dates back to the 3rd century. He was born in Cappadocia and was said to be beheaded during the Roman Emperor Diocletian's persecution of Christians.

It was however, in the 14th century that the dragon slaying legend was created. In Cappadocia there was a terrible dragon that attacked the kingdom and residents. Scared, they fed the dragon two lambs a day to satisfy its hunger, but when animals ran out, they decided to sacrifice people to the dragon by way of a lottery. The first turned out to be non other than the princess. Legend has it that Sant Jordi saved the princess from the clutches of the fearsome dragon, killing him with his lance... With blood pouring from the wound, from it grew a beautiful red rose. 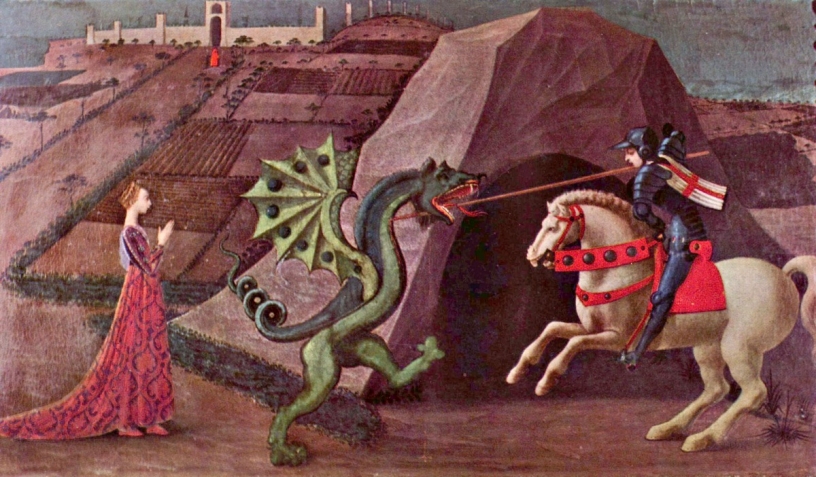 St. George and the Dragon

So, in Catalonia (as well as on the Baleares Islands and in Valencia), during St. George's Day on April 23rd, the streets are full of roughly more than 2 million roses with people passing by buying them for their partner. In exchange the other partner will buy them a book as a symbol of recognition.

The representations of dragons

By those in the know, Barcelona is affectionately called Drakcelona. Dragons hide in every corner of the city, ready to be discovered by passersby - citizens and tourists alike.

In the Catalan capital you can admire many examples. In fact, the dragon is a versatile beast and every artist, over the years, has created a work differently according to their imagination. Moreover, it is also said that the oriental dragons (which do not have wings, but fly) are imaged to be kind, while Western dragons are thought to generally be evil beings (though these days they can also be seen as wise-guardians). 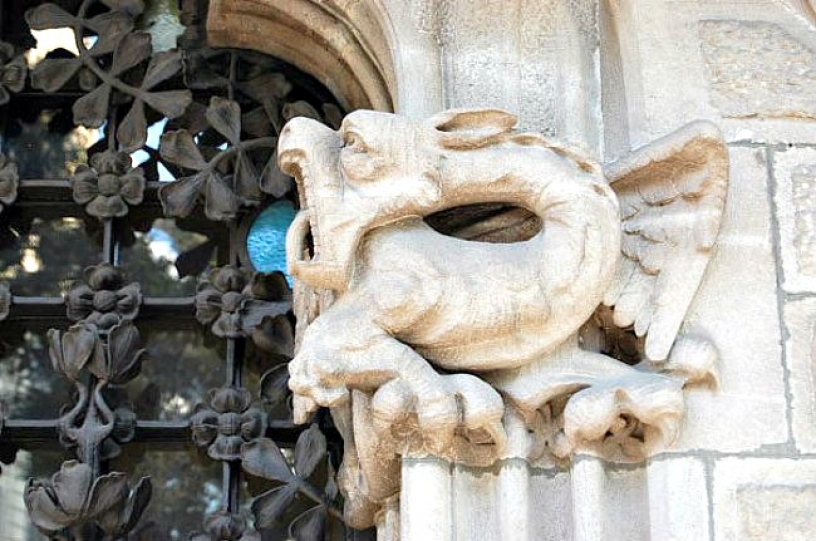 Dragon on a modernist building

In Barcelona you can find them in different colors, sizes, and shapes. Some of them have large jaws with a glare and sharp claws; others, legless, wingless, look more elegant and less threatening.

They are made of stone, wrought iron, wood, ceramics, and are usually found in unexpected places like corners of balconies, camouflaged amongst the lamps, door handles, or gutters ... Some are represented alone, others alongside Saint George.

The iconography of the dragon has changed much over the centuries, and the figure of this mythological being influenced the modernist period strongly, because they saw it as a being exotic. 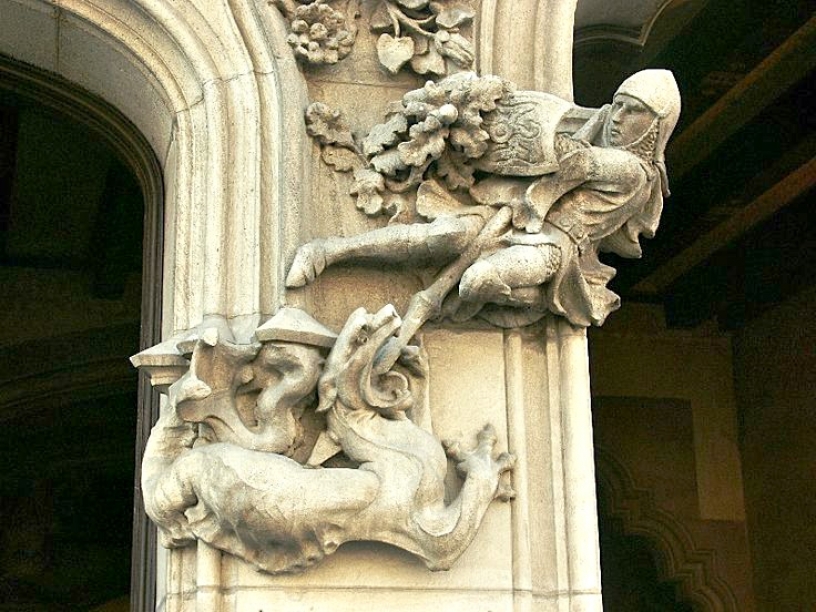 There are large figures and small ones. The largest dragon sculpture in the city appears in the Parc de l'Espanya Industrial which is about 32 meters long and weighs 150 tonnes. The smallest happen to be a pair of dragons on the door handles of Pati dels Tarongers (Courtyard of the oranges) at the Palau de la Generalitat they are just 10 cm and weigh only 100 grams.

One of the most curious and well-known is the chinese dragon on the "House of Umbrellas" - a pre-modernist building on Las Ramblas. It is a guardian dragon Dilong who watches the skies and brings rain and controls rivers according to Eastern legends. 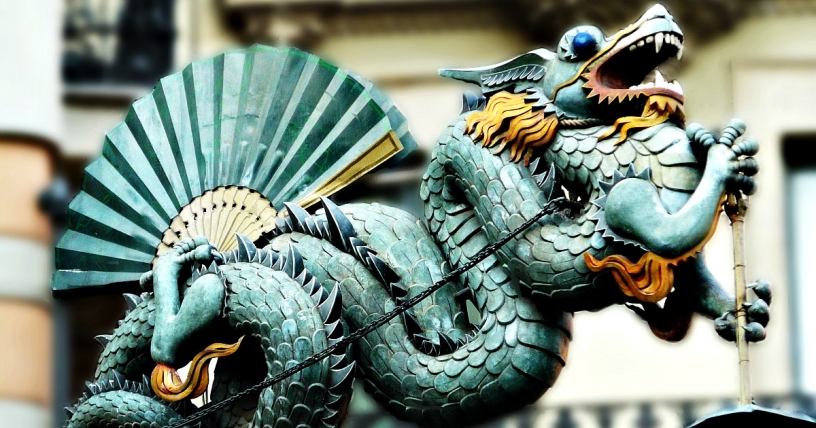 Dilong makes sure that it at least rains sometimes in Barcelona ;)

The dragons of gaudí

Even Gaudí paid homage to dragons when he built two particularly outstanding representations, as was his style ;). One of them is the dragon at Park Güell created using his mosaic technique called 'Trencadís'. 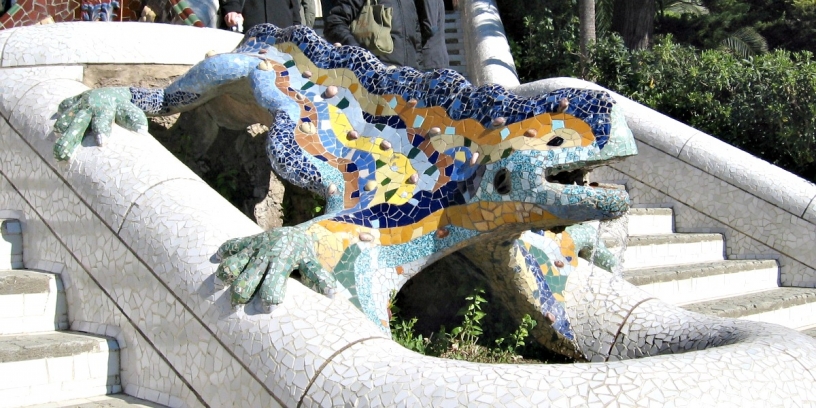 The other, perhaps less known, is a gate of wrought iron at the entrance of the Pabellones Güell in the Pedralbes neighbourhood (Av. De Pedralbes, 7, 08034 Barcelona). 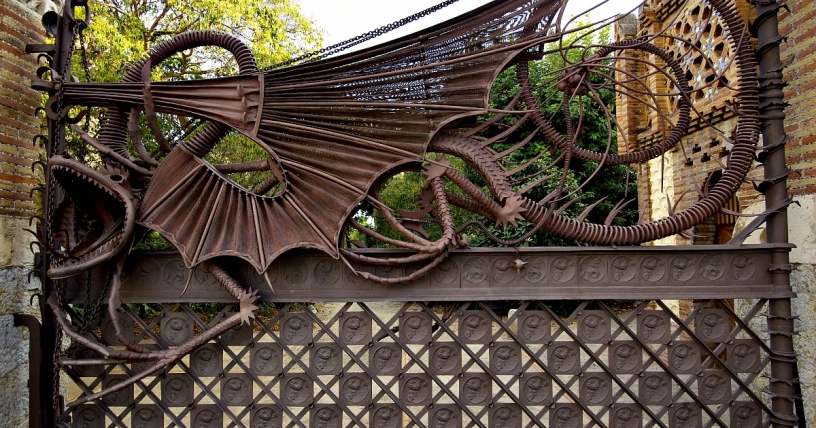 The buildings of Gaudí

Gaudí was so into dragons that in fact, two of his entire buildings are actually full representations of these mythical creatures. As is the case with Casa Batlló. It is a representation of the George and the Dragon tale. Take a look at the video if you want a more literal interpretation though:

The other building-cum-dragon is Torre Bellesguard, a secret that you'll discover for yourself when you climb to the roof... 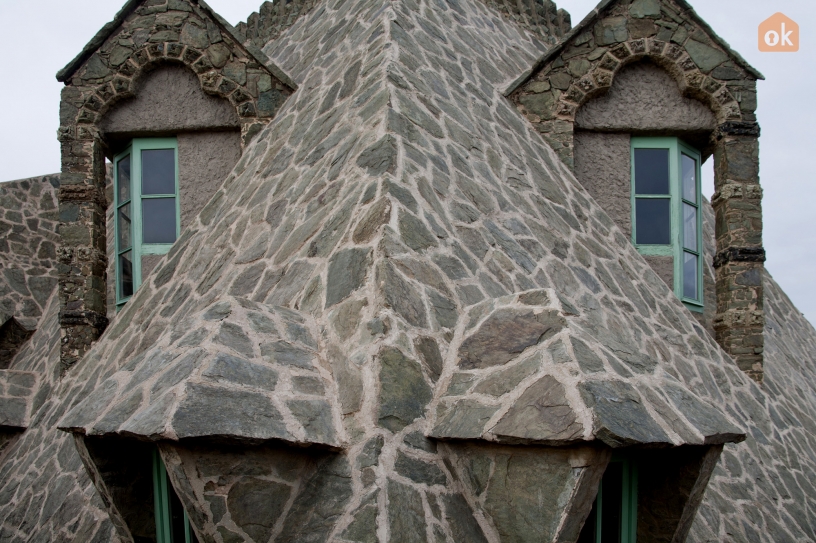 The beast of Bellesguard

Am I going too fast? Don't worry, in Barcelona thematic routes are organized to discover dragons and other fantastic animals that characterize the city, all in order to know the best kept secrets, legends, and stories of the oldest neighborhoods ...;) Generally, the tour starts in Ciutadella Park and continues through the the Born neighbourhood, then the Gothic Quarter, Cathedral, and finally las Ramblas. Here you can check all the details.

The dragon in Catalan Culture

Not only does Catalonia celebrate the dragon from the St George legend, but it is also the protagonist of one of the most spectacular Catalan traditions - the Correfocs (or Fire-runs), a traditional dance/parade from the XII century representing the struggle between good and evil which today incorporates fearsome fire-breathing dragons...! ;) 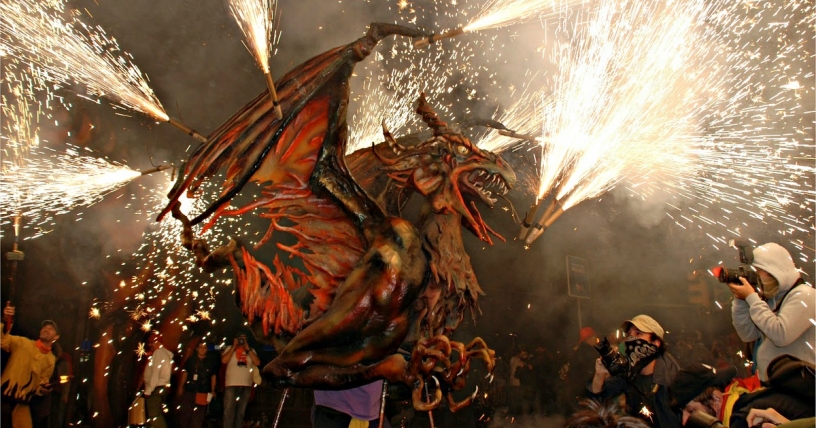 Correfocs - A city on fire!

So did you know all about these mythical stories about dragons in Barcelona? Hopefully you enjoyed the article and now all that remains is for you to put on your fire proximity suit and get ready to hunt some dragons. It's going to be dangerous, but you can do it!