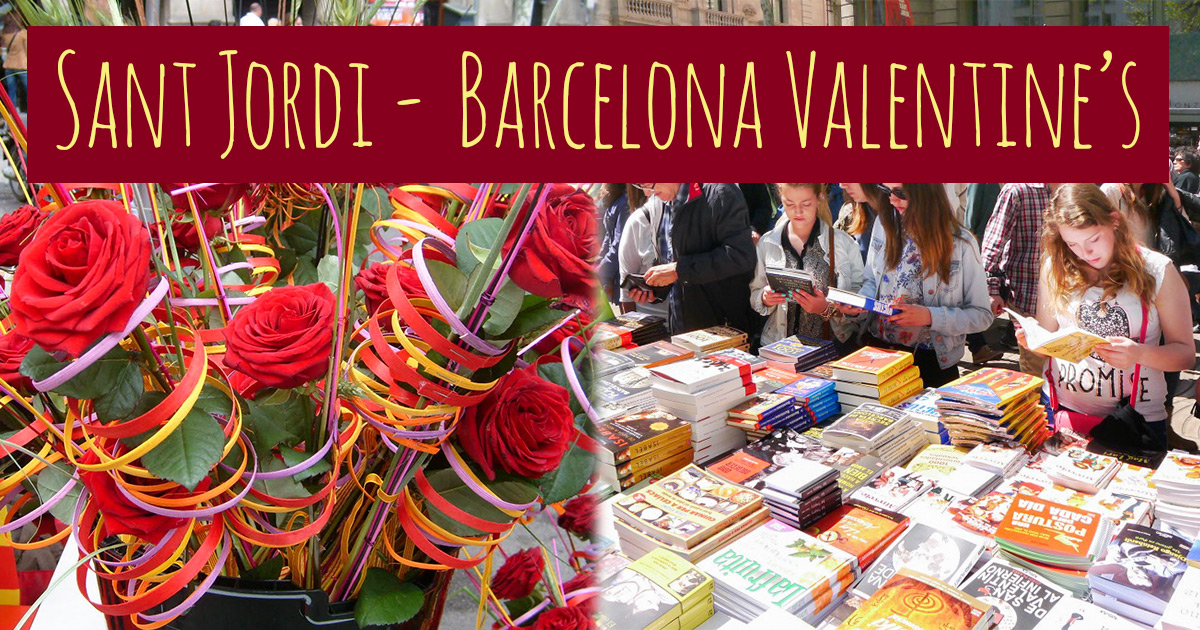 St. George’s Day, also known as Sant Jordi, takes place on 23 April and celebrates the patron saint of Catalonia: St. George and his history with the dragon. The central elements of this celebration are culture and love, in addition to the dragons who are represented on this day with traditional gifts: books and roses.

Did you know that St. George’s Day is the most loved festival of all the Catalan traditions? Take a look at this article which tells you all about the festivals in Catalonia:

How is St. George’s Day celebrated in Catalonia?

The tradition says that on St. George’s Day, women receive a rose from the men and in return they give them a book. In fact, this celebration is known globally as “Catalan or Spanish Valentine’s Day”. In Barcelona, the place to celebrate St. George is on La Rambla which is filled with booksellers and florists every year. 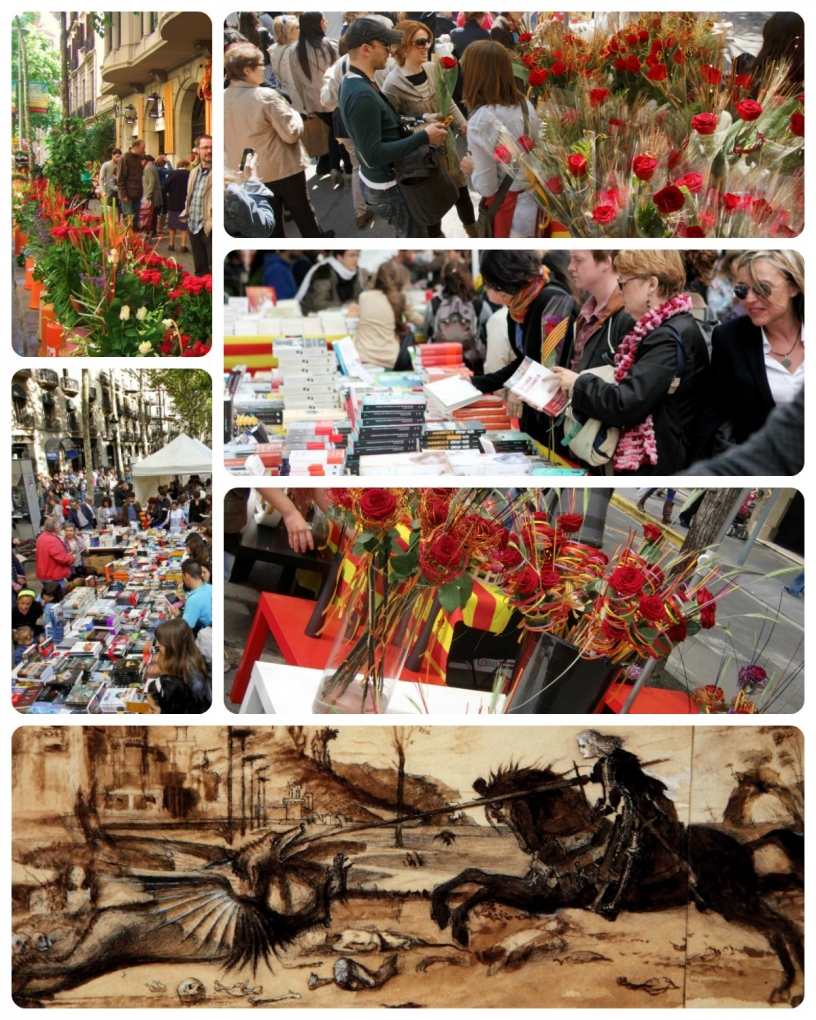 Books and roses dominate the streets of Barcelona

Known as St. George and the Dragon, the festival on 23 April is very important for Catalans, who over the years have promoted and defended their culture and language. In fact, during this celebration, many balconies in the city are full of ‘senyeras’, the flag of Catalonia.

On St. George’s Day, you can find books in all languages spoken in Catalonia, but there are lots of stands with books in Catalan. In the last few years, the festival has become famous all over the world, so don’t worry, you will find many books in every language.

We advise you to reserve your apartment in advance because many people decide to travel to Barcelona for St. George’s Day. Don’t miss out on this incredible and unique event in the Catalan capital!

Stands at the Festival

“That morning, which had dawned with a sky coloured with trumpets of death, all the booksellers of the city got up early, ready to take their book stalls to the street and confront if there were tornadoes and typhoons. [...] The florists, armed with an ocean of red roses, had been no less.”

You will find book stands mainly on La Rambla and Passeig de Gracia, but also in the squares and surrounding streets, normally in the busiest places in each neighbourhood. It is a day in which readers take advantage of novelties in books and also talk with writers. In fact, the sale of books signed by the author and a discount on the sale price has been promoted in the last ten years.

It’s also an important day for writers and to be able to participate in this festival in Barcelona is an honour. For example, one of the most famous authors from Barcelona, Carlos Ruiz Zafón, decided not only to publish his books on St. George’s Day, but also to speak about the festival in his works and to write a novel in honour of the day. If you would like to read the story “The Rose of Fire” which was published in “La Vanguardia” newspaper in 2012, you can find it here (in Spanish). Also, activities are carried out in libraries and concerts on the streets.

The city of Barcelona is full of florists’ stands, who on this day sell around 40% of the roses sold over the whole year. Many bookstalls will also have red roses; on St. George’s Day these two elements are inevitable. You can find them especially on Las Ramblas and in the Old City. 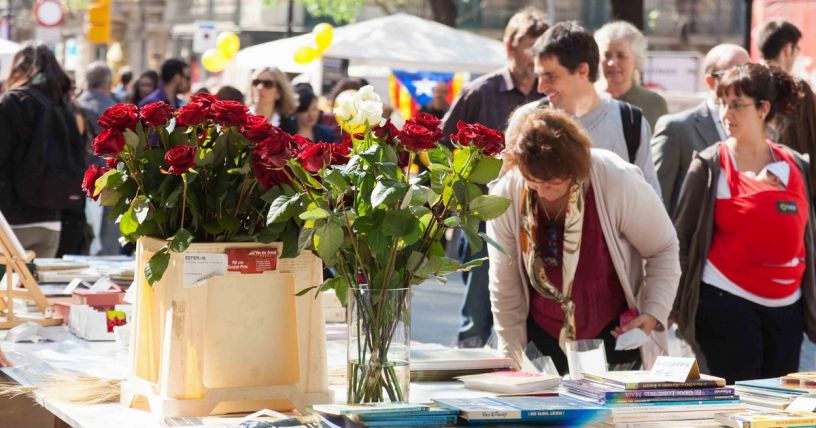 “A velvet star and an electric blue sky lined the city while thousands of locals went out in the sun to stroll among the hundreds of book stalls that topped paths and promenades.”

The day of books and roses is full of activities for the public. Normally, many attractions in the Catalan capital organise shows, promotions or special tickets. Normally the activities are advertised one or two weeks before the much anticipated day.

Some of the attractions that you can enjoy are the Modernist Campus of the Sant Pau Hospital of Lluís Domènech i Montaner, Palau Güell, the Ateneu Barcelonès, the Archaeology Museum, the Museo d’Historia de Catalunya or the Pavilion Mies van der Rohe. But, the most anticipated activities are: 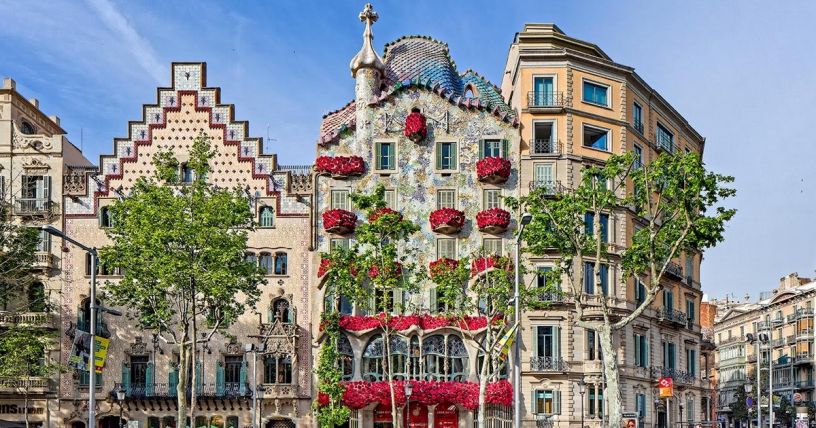 The front of the work by Antoni Gaudì on Sant Jordi

Also, during the St. George’s Day, the council has activities for children. Traditionally, the Palau de la Generalitat has its doors open to see the Pati dels Tarongers, the Capella de Sant Jordi or the Daurat hall.

The day of books and roses cannot lack magic and mystery. Normally, there are illusionists and magicians performing in the streets. Also, every year charity roses are sold to non-profit organisations. The program is completed with a saradana performance from the Colla Sardanista de Sant Jordi in Plaza de Sant Jaume.

Why is St. George celebrated?

Knightsman George, or more commonly known as St. George, was under the orders of Emperor Diocleciano. When this man refused to persecute the Christians, he was martyred and beheaded. In this way, the martyr cult began which led to fantastic stories about this figure, such as this one…

It is said that a terrible dragon persecuted men and beasts in the village of Montblanc. To stop it, the inhabitants decided to draw an inhabitant and gave it to the monster to eat. But one day, it was the turn of the daughter of the king of Montblanc. She would have died at the hands of the monster if the knight George had not faced the dragon, killing him. The tradition adds that with the blood of the beast, a rosebush of red flowers grew.

Thanks to this legend, the city of Barcelona is full of representations of dragons… discover where they all are in this article!

Although in the 8th century this cult already existed, the celebrations of the martyr George extended to all of the Catalonian countries during the Middle Ages. Then, from 1456, he became the official patron of Catalonia. At the end of the 19th century with the political and cultural Renaixença movement, the St. George’s Day festival was established as the most civic, cultural and patriotic celebration in Barcelona and Catalonia.

Why is a rose given on St. George’s Day?

In the 15th century, the city of Barcelona organised a rose festival. All the women who attended the mass in the Sant Jordi chapel (in the Palacio de la Generalitat) on 23 April were given a rose. Nowadays, the red rose, symbol of passion, is accompanied by the Catalan flag and an ear of wheat which symbolises fertility. 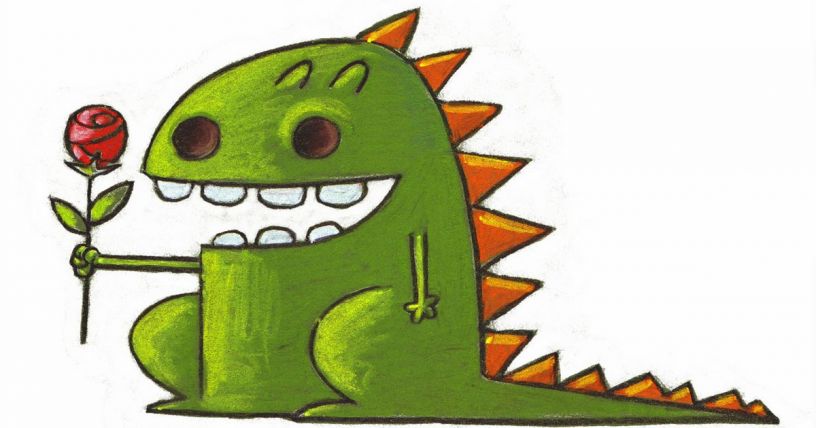 Why is a book given on St. George’s Day?

The story associated with the book takes us to the 1920s. The Valencian writer Vicent Clavel I Andrés, director of the Cervantes publishing house, proposed to the Official Chamber of the Book of Barcelona and the Guild of Publishers and Booksellers to organise a party for the book in Catalonia. The date decided was 7 October 1927. Additionally, the tradition of giving a book is said to come from the Royal Decree approved by Alfonso XIII in 1926 who decided on 7 October as the day of the Spanish Book Festival.

Finally, in 1929, during the International Exposition of Barcelona, the booksellers decided to organise themselves and go out into the streets to present news about reading. This day was so successful that it was finally decided to change the date of the Day of the Book to 23 April. Also, this day is very important because it coincides with the death of two big authors in the history of literature: Cervantes and Shakespeare.

Quotes from the book “The Labyrinth of Spirits” by Carlos Ruiz Zafón:

Don Miguel de Cervantes and his colleague Mr. William Shakespeare did not die in vain technically on the same day, 23 April. If both showed us their hand with such precision in the same working day we will not be less booksellers and intimidate us. Today we went out to unite books and readers even though General Espartero bombed us from the Castle of Montjüic.” (Fermín)

“Will you bring me at least one rose?” (La Bernarda)

The success of this fair was so big that in 1995 the General UNESCO Conference declared the 23 April as World Book Day and Copyright Day. Nowadays in Catalonia, the Balearic’s and parts of Valencia, the men gives roses to the women who in return give the men a book every 23 April. 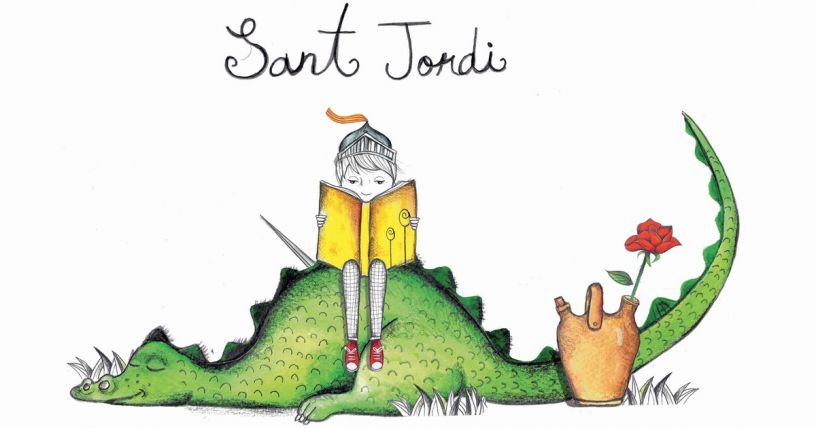 St. George's Day is also incredible for the little ones

“9 o’clock arrived, the streets in the centre of Barcelona were decorated for the great day of books I the hope that the murky prophecies did not frighten the lovers, the readers and all the clueless who gathered on the 23 April of every year since 1930 to celebrate, in Fermin’s opinion, the best party known to the universe.”

If you want to discover the true Barcelona, St. George’s Day is the best time to visit. If you want to see it with your own eyes, take a look at this video which will show you what happens on this fantastic day.