On this huge square in the centre of the gothic quarter, you can find the two most important political buildings in Catalonia: The Ayuntamiento de Barcelona (Barcelona City Hall) on the south side and Generalidad de Cataluña (Parliament of Catalonia) on the north side, which is about 500 years old.

Plaça Sant Jaume is not only of political and historic importance, but also the location of cultural and public events such as concerts, expositions and celebrations of victorious football matches. Protected by policemen and soldiers, this place is often frequented by tourists, demonstrators and sometimes even Castellers.

Plaça Sant Jaume before and after

In this picture you can see the Generalitat de Catalunya building in 1915. A major restoration on this building took place almost a century before this picture was taken — during 1823 — so we don't see much change apart from the new street lamps in front and some minor modifications on the windows. Also on the roof is a lot less cluttered.

When Barcelona was a Roman colony named Barcino almost 2000 years ago, this place was used as a forum to hold speeches and public debate. This square is named after the famous church Sant Jaume that was situated next to it until 1349 when it was moved to the street 'Carrer Ferran'. In 1823, it was reconstructed and renamed as Plaça de la Constitucio. In 1931, the Republic was announced on this place and in 1977 the former president Tarradellas announced his return from exile with the words "Ciutadans de Catalunya, ja sóc aquí" ("Citizens of Catalonia, here I am") as a message for regained Catalan autonomy rights. 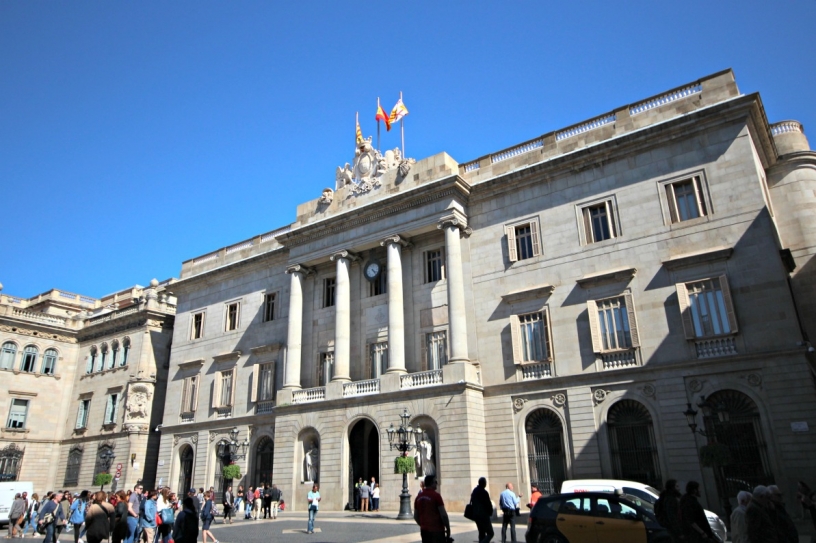