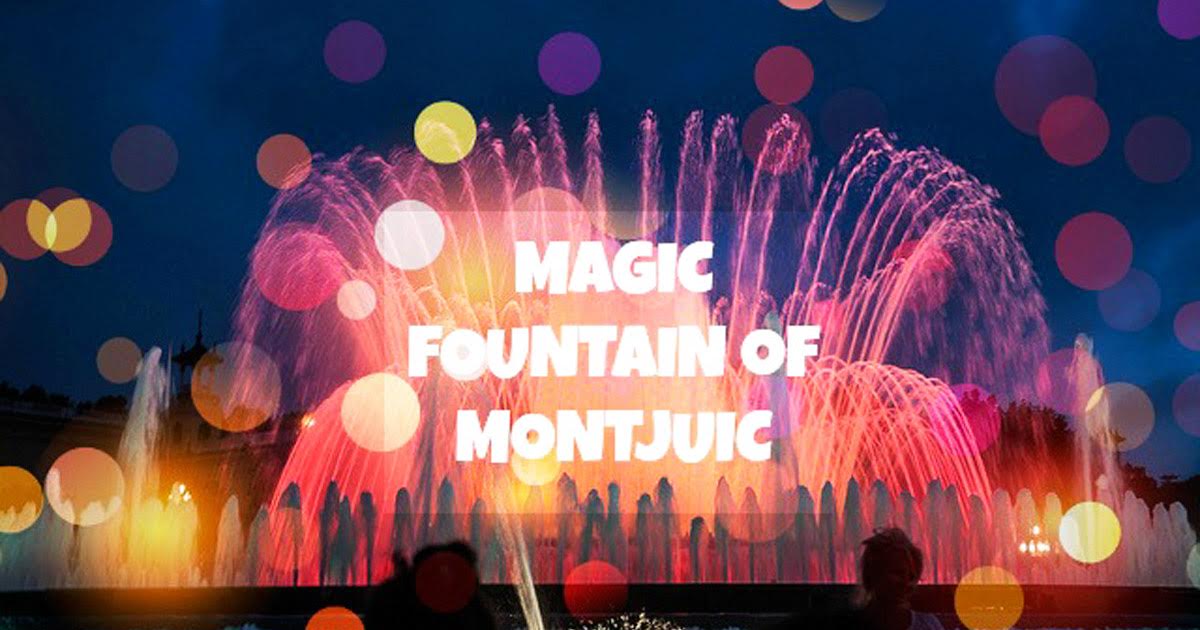 Around 2.5 million people visit the Magic Fountain of Montjüic every year, which is an unmissable attraction when visiting Barcelona. This particular fountain is special as it displays a wonderful and bewildering show of light, colour, and water dancing to music throughout the year. Each show is different so you can even watch it more than once!

You can see opinions of the show on Tripadvisor. Many of the negative ratings have been from people who missed the show so make sure the show is scheduled when you visit to avoid disappointment! It's ranked as the 2nd best concert and show in Barcelona.

Times and Dates to see the Magic Fountain Show

The water begins dancing to music from the 70s and 80s which then moves onto Spanish classical music and more recent songs. The show displays different sequences of musical choreography ranging from movie soundtracks to classical music shows, a 20th and 21st century show and a pop mix with the song "Barcelona" by Freddie Mercury.

The current opening times are:

Every year on New Year’s Eve, there is a special show which comes highly recommended. Find out more about this in the following article:

How to get to the Magic Fountain

It's easy to get to the fountain, located at the foot of Montjuïc, which you can reach via the Espanya Metro station and then walking up Maria Cristina Avenue. This avenue is hard to miss owing to the two large Venetian towers that adorn it. You will eventually reach the fountain. 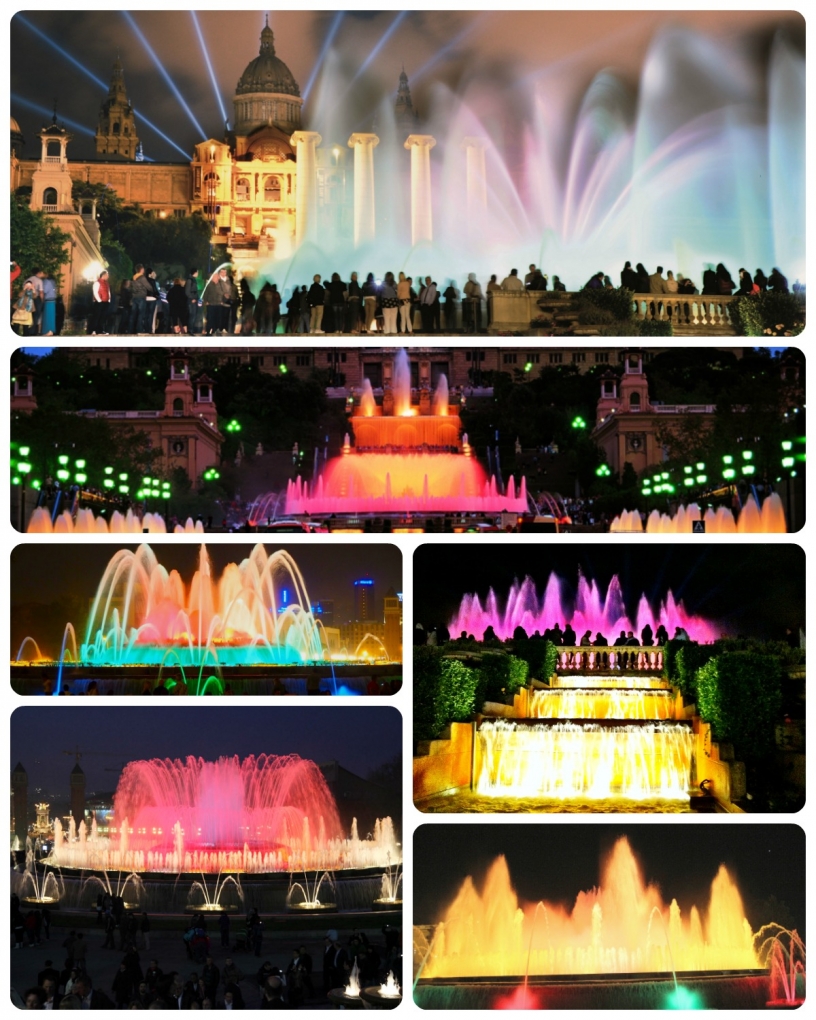 If you want to ensure you get the best view of the fountain, you will need to arrive early as the show is very popular. Be careful of pickpockets as well! Ideally, try to get there one hour before the first show. Take some snacks and drinks to pass the time.

The best spot to watch the Magic Fountain Show is on the steps to the Museu Nacional d'Art de Catalunya (MNAC) museum. You will get a great view without getting soaked! Alternatively, you can stand by the four pillars, as they are close enough to the fountain to get a great view, yet far enough away to avoid getting wet.

As long as you get there early enough, the rooftop terrace at the top of Las Arenas Shopping Centre is also a good place to watch the show, although it gets very busy. It’s a little further away than the other spots, but it could still be good option. You can also enjoy views over the rest of the city from the terrace.

In 1929, Carles Buigas built the Magic Fountain for the International Expo, which was the second world fair to be held in Barcelona after the first in 1888. The International Expo saw the participation of 20 European countries, such as France and Great Britain, as well as some private organisations from the USA and Japan. The exhibition led to a great advance in the city’s economic, architectural and technological growth and development, including the reconstruction of Ciutadella Park.

If you want to find out more about Ciutadella Park, read this article:

In 1929, the organisers of the International Expo decided that they needed something to make the event stand out, thus Carles Buigas came forward with his “colossal, daring and costly plan” which would later become the beautiful Magic Fountain of Montjüic.

Carles Buigas built the fountain on the site where Josep Puig i Cadafalch’s Four Columns stood, before they were demolished in 1928. In 2010, the columns were rebuilt.

It took less than one year for over 3,000 workers to build the fountain which has brought light, water and colour to Montjüic. Once it was completed, the fountain was the focal point on the main thoroughfare of the event. However, during the Spanish Civil War (1936 – 1939), many of the fountains features became damaged or lost, therefore from 1954 to 1955, restoration work was carried out to restore it.

In 2010, the city of Barcelona decided to start using groundwater as part of their plan to become a more sustainable city. As part of the plan, they wanted to reduce water consumption. In 2011, a 3D choreography generator, editor and simulator was introduced which would allow the creation of new light, water and music shows in only 3 minutes. It also led to energy savings. New equipment was introduced in 2014 to control consumption even more, making the fountain even more sustainable. 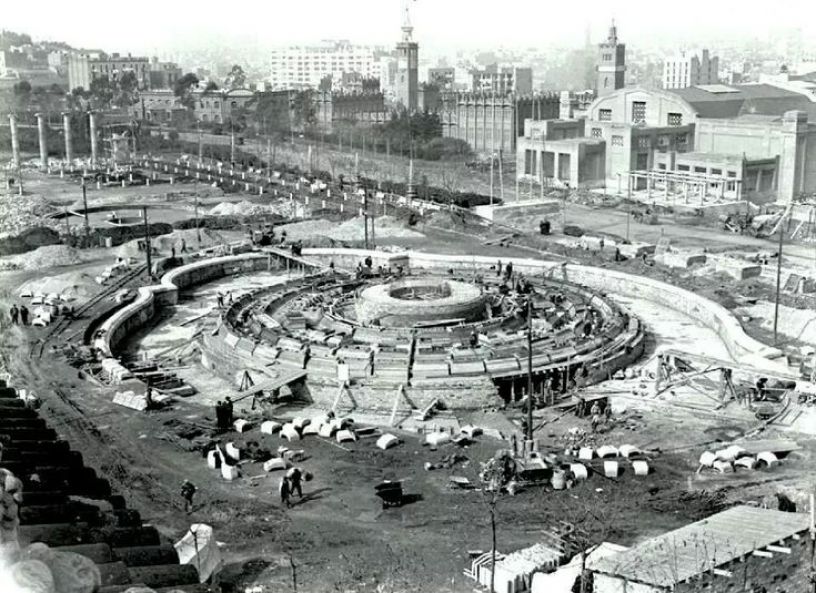 Construction of the Magic Fountain in 1929

Video of the Magic Fountain