The interior & exterior of the Sagrada Familia 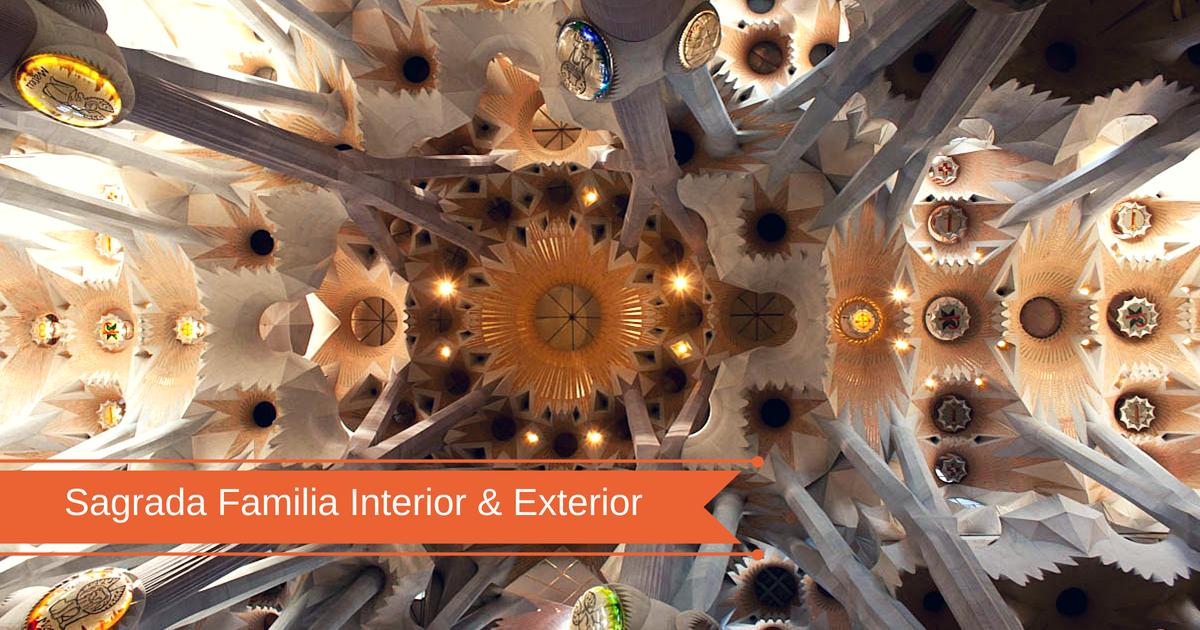 The interior & exterior of the Sagrada Familia: Towers, façades and facts

Planning to discover the amazing interior of the Sagrada Familia? Have a look at our long term apartments! All our apartments are fully furnished for a comfortable stay in the Catalan capital. As well as the Sagrada Familia, there are lots of other places to be discovered in Barcelona.

Gaudí was a great fan of God and he incorporated religion into both the interior and exterior of the Sagrada Familia. The basilica has no straight lines and everything has been built with the objective of imitating mother nature. With the different columns and the stained glass windows, Gaudí tried to make the inside of the Sagrada Familia resemble a forest. The conception of Gaudí on the Sagrada Familia is derived from the traditions of the Gothic and Byzantine cathedrals. He used the architecture to express the Christian belief, such as with the towers (see section 'Sagrada Familia towers').

TIP! This article uses several terms that are related to the architecture of a church. This overview with images illustrates what is meant by these terms. 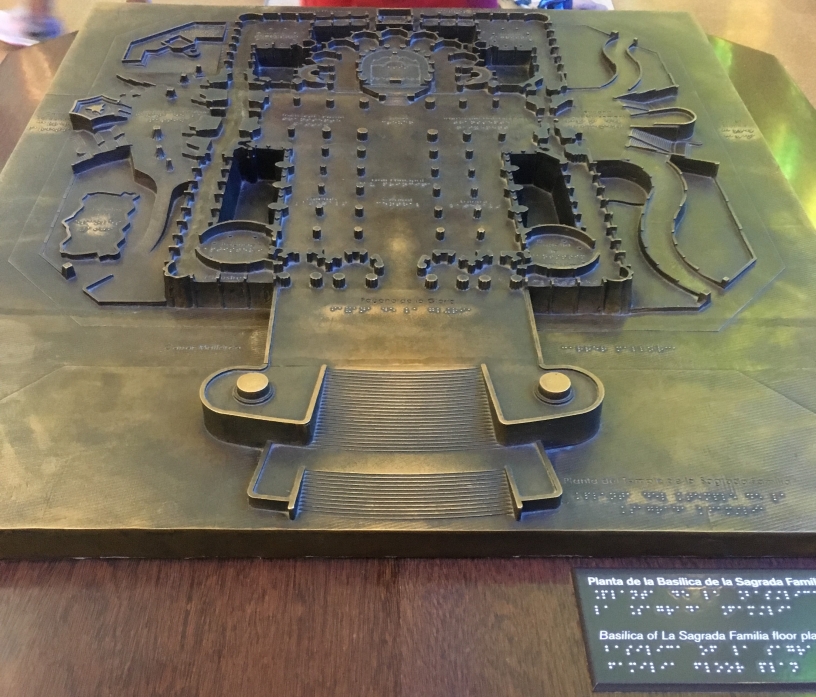 The interior: floor plan of the Sagrada Familia. The dots represent the different columns inside.

In architectural terms, an apse is known as half of an area with a dome. The altar is usually positioned here in churches. The apse is located inside on the crypt, which was built as the very first part of the Sagrada Familia. In this crypt, among others, Antoni Gaudí is buried. The apse consists of 7 chapels and on both sides of the apse are beautiful stairs that give access to the stands on the outer middle ships.

The inside of the apse is decorated with angel heads and in the middle of the altar, on a throne heaven, Jesus hangs on the cross. This throne heaven is decorated with vines and grapes. It is remarkable that Jesus looks upwards, as it is customary for Jesus to look downwards or sideways. This was done deliberately to represent Jesus looking upwards to ask for support from God. Usually, the altar is the most impressive element of the interior of a basilica and that is the case here as well.

The rest of the walls in the apse were designed by stained glass windows. With the sunlight this gives an impressive colour effect on the interior of the Sagrada Familia. It must be said that this also comes through the stained glass windows on the outer naves. Also located behind the altar are the organ pipes. These are enormous in size and produce a very beautiful sound inside.

The interior of the Sagrada Familia has 5 naves. A nave is a large space where church visitors often sit during a mass or performance. The main nave inside the Sagrada Familia rises far above the other naves and is connected to the transept. Behind the transept is again the choir with the chapels, which is mentioned in the section about the altar at the top of this article. The altar stands in the light of the impressive stained glass windows. 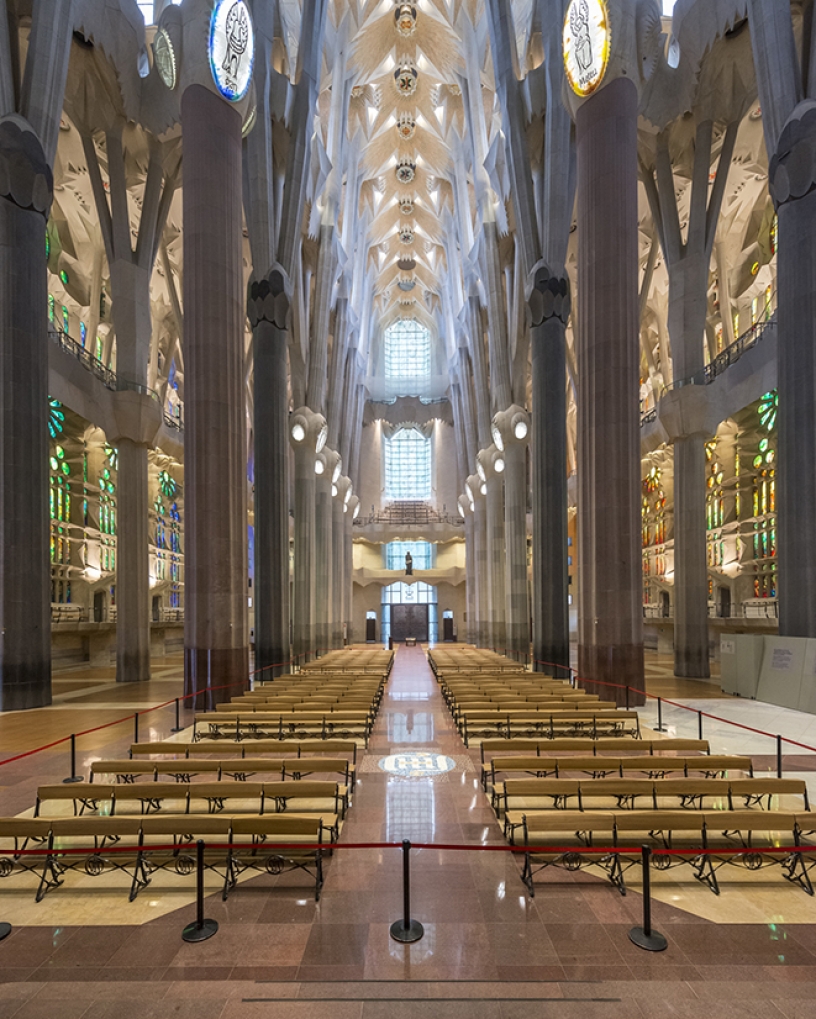 The interior: the main nave with pews for people to pray and admire the altar. Notice the stained glass windows on both sides of the Sagrada Familia.

The layout of the Sagrada Familia resembles a Latin cross with enormous dimensions. The Sagrada Familia is one of the largest church buildings in the world. Measured from the entrance (glory façade) to the apse it is 90 metres long. The 5 naves inside are connected to the transept that are 60 metres long and 45 metres wide. The middle nave is 15 metres wide and the remaining 4 naves 7.5 metres. That makes totals 45 metres, or just as wide as the transept.

The construction of the naves was started in 1897. This was done using models by Antoni Gaudí which had not been lost during the Spanish Civil War in 1936, as was the case with other drawings and instructions. The vault, the arch constructions that form the ceiling in the naves, are 45 metres high and the aisles 30 metres.

The outside façades are each equipped with 4 towers that represent the 12 apostles. The 4 bell towers per façade are connected by bridges and decorated with beautiful and colourful pinnacles that are finished with a white ball on top. These globules refer to certain fruits that in turn refer to the summer time. In addition, there are 5 more towers in the middle of the Sagrada Familia. These towers are currently being worked on, but the towers are still far from finished.

First of all, there will be 4 celebration towers of 120 metres high with another tower of 170 metres high in the middle. The highest tower symbolises Jesus, who is surrounded by 4 evangelists. The 4 towers are 120 metres high respectively. The tower of 170 metres will be slightly smaller than the hill Montjuïc in height. Gaudí purposely designed the tower like this since he believes that the work of humans cannot be higher than what has been created by God. 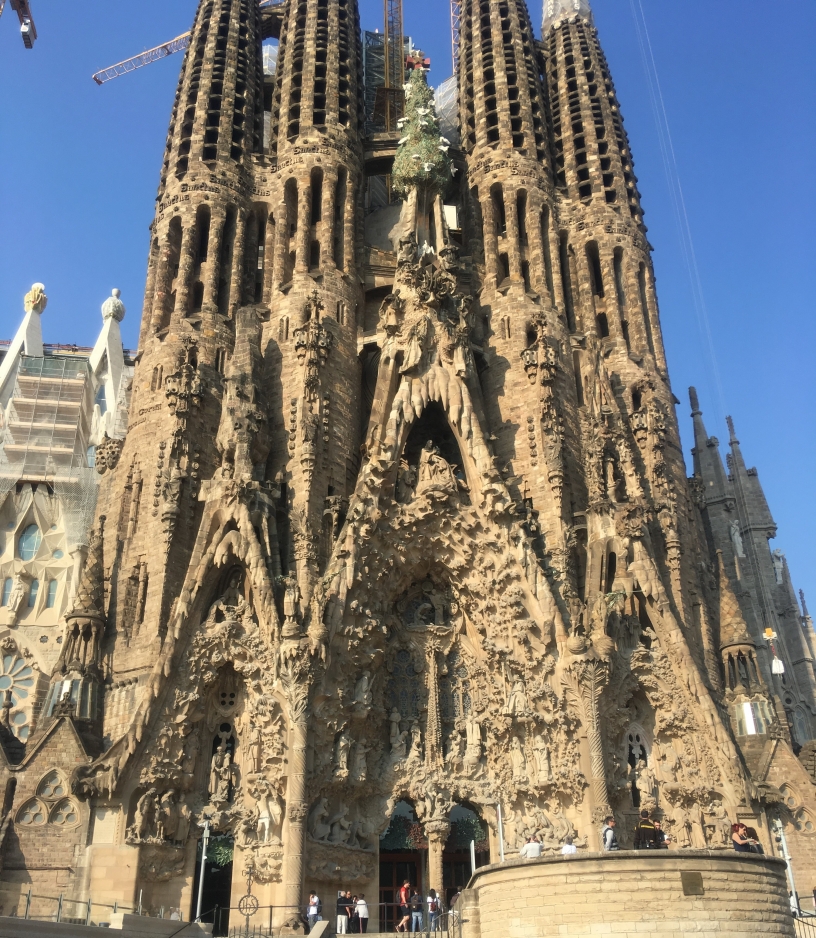 The exterior: the 4 towers at the nativity façade. Behind these 4 towers you can see the construction of the other 5 towers in the middle.

The exterior of the Sagrada Familia has 3 façades that each depict a phase in the life of Jesus: nativity, passion and glory. According to the Christian faith, passion is also referred to as suffering. Although the façades are located on the outside of the Sagrada Familia, I would like to tell you something about it. And besides, the various façades are very impressive of course!

The nativity and passion façade have already been completed and the glory façade will be the last part of the interior and exterior of the basilica to be finished. The façade of the nativity is located on the Carrer de la Marina and the façade of the passion on the other side of the Sagrada Familia, on Carrer de la Sardenya. Each façade also has 4 clock towers. These 12 twelve towers refer to the 12 apostles.

The nativity façade is located on the northeast side, facing the Plaça de Gaudí. This façade was built first in the Catalan modernist style. That is because Gaudí was in charge of the work until he died in 1926. At that time the (exterior of the) nativity façade was already well advanced. The façade has 3 gates with sculptures of the virtues "Fe", "Esperança" and "Caritat", Catalan for Faith, Hope and Charity. The facade is richly decorated with natural scenes of which some are exotically tinted.

The 3 ports are separated by 2 columns. Both columns have a tortoise at the bottom. These outside turtles are designed for the local population to direct them to the 2 most important aspects of the landscape: the mountains and the sea. The middle and largest gate of the birth façade is richly decorated with, the 3 Kings (left underneath) and Joseph and Mary with Jesus on the pillar, among other things, which divides the middle gate in two. 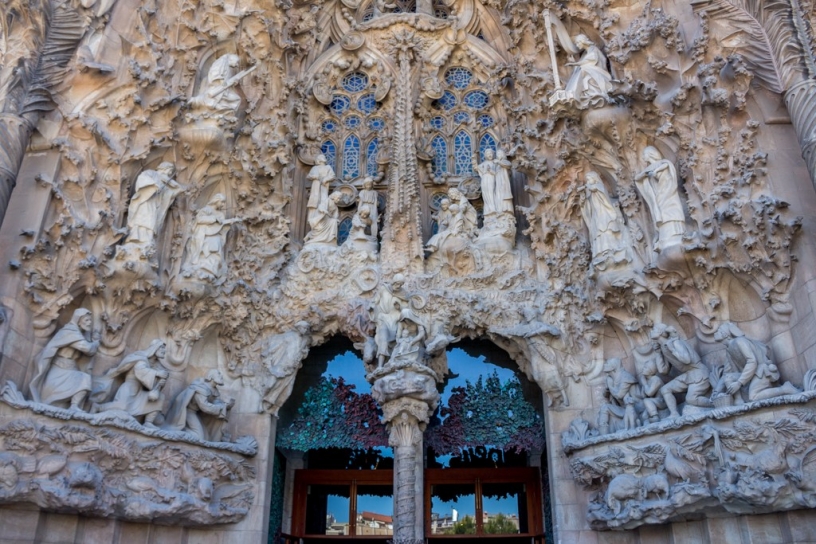 The exterior: nativity façade with the 3 kings at the left side of the door.

The passion façade is located on the opposite side of the birth façade on the south-west side of the Sagrada Familia. The exterior of this façade faces Plaça de la Sagrada Família. This side was built half a century later than the nativity façade and therefore has a much more modern style. It is covered with polygonal sculptures and has the sculpture of Jesus on the cross which is the most striking feature. Jesus does not wear a loincloth, so the genitals are visible. On the same façade there is also a magic square whose magical constant is 33, the age at which Jesus Christ died. 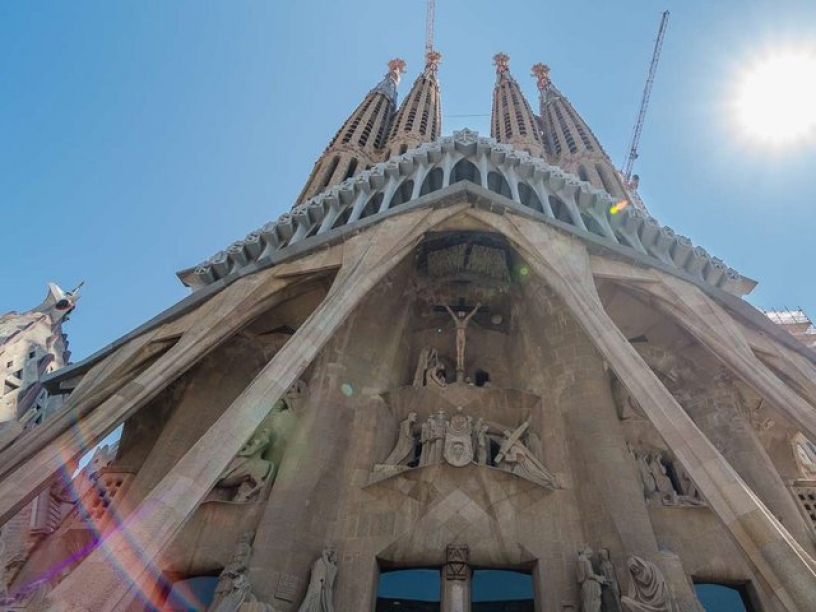 The exterior: the passion façade with Jesus. At the left side of the door you see Judas kissing Jesus.

In addition to the magic square, on the right, 2 sculptures can be seen: Jesus and Judas. Judas betrays Jesus here by giving him a kiss and thus to show the priests, Pharisees and Roman soldiers that Jesus is the man they seek. In return, Judas would receive 30 pieces of silver. This betrayal is represented by the snake, which is located at the bottom right of the wall behind the sculptures of Jesus and Judas.

Paraboloids: Gaudí used those shapes to create linking surfaces between the columns on the passion façade. Click on this link for an example.

A little further to the right is the main entrance of the passion façade. This main entrance has 2 huge doors with walls and glass windows on top. Both the doors and the walls above the door have the New Testament printed on them in Catalan. The words are in black and the doors and walls themselves are green. The most important words have a golden colour, such as the words 'Jesus' and 'Jesus D Natzaret'. In our opinion, this piece of exterior is the most beautiful.

As already mentioned, the glory façade will be the last element of the whole Sagrada Familia to be built. This façade is located at the front, on the southeast side. There is not much to see of this glory façade at the moment as almost nothing has been done on it. However, a start has already been made with the foundation for the shell-like towers on this side. See the picture below for the current version of the glory façade. 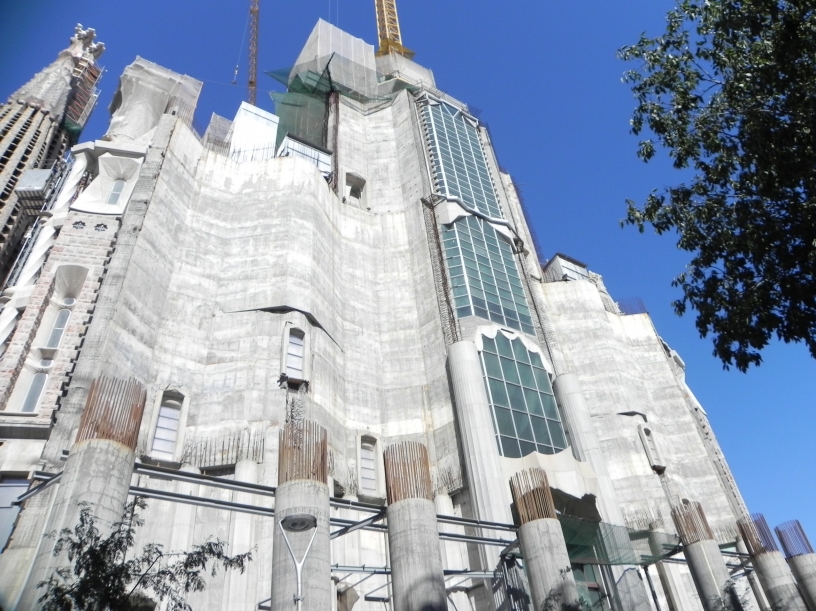 The exterior: the current status of the Glory façade. Far from finished...

In addition, the intention is that the glory facade will become the main entrance to the entire Sagrada Familia. For this to happen, a bridge must be built on Carrer de Mallorca. This bridge will have beautiful stairs leading to the street level. Unfortunately there is one problem: there are currently apartment complexes where the stairs are meant to be. In order to finish the (exterior of the) Sagrada Familia completely, these apartment complexes will therefore have to be demolished. But you will understand that this is a long and complicated political process and there is a lot of resistance from, the current residents among others. With this in mind, the big question is whether the Sagrada Familia will actually be finished in 2026.

When will the Sagrada Familia be finished?

If you are intrigued and want to see the Sagrada Familia with your own eyes, then we recommend going on a sunny day. Because of the sunrays and the many stained glass windows, you will be able to admire a truly beautiful and colourful effect inside the basilica. Besides discovering the interior and exterior of the Sagrada Familia you can also choose to visit the towers and enjoy a great view of the city. For a comparison of the different tickets and corresponding prices, click here! With an online ticket you do NOT have to stand in line. Click on the article below if you would like to know more about my visit to the Sagrada Familia.