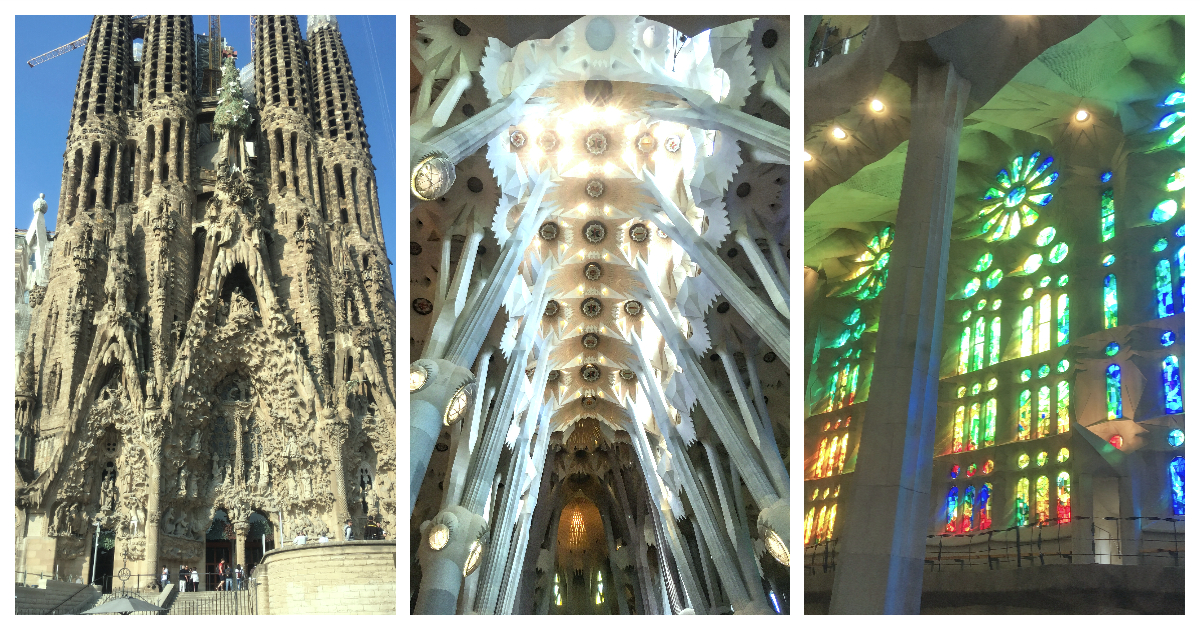 TIP on Visiting the Sagrada Familia by Antoni Gaudí

Would you like to visit the Sagrada Familia? Then for sure you will need accommodation nearby. Our monthly rentals in Barcelona are fully furnished and verified so you will have a comfortable stay in Barcelona. The public transport lets you move around the city quickly and easily in order to explore other parts of the Catalan capital as well. See you soon in Barcelona!

Furthermore you would be doing yourself a huge favour by reading a little bit about the architecture of the Sagrada Familia before your visit. The Sagrada Familia itself is enormous and looks absolutely stunning with lots of attention to details. Because there is simply too much to discover, some foreknowledge will be useful. It will also help you to better understand the architect Antoni Gaudí.

Luckily for you I also wrote an article about the different elements and the architecture of the Sagrada Familia. It is up to you to decide whether to read the whole article or just a few interesting headers.

To take the best selfies and pictures, make sure your phone is sufficiently charged or take a good photo camera with you. With every single ticket you can stay as long as you want inside the Sagrada Familia, also when the guided tour is over. So do not plan anything immediately after your visit to the Sagrada Familia to ensure that you will have enough time to discover this fantastic basilica.

The Sagrada Familia has the following openings times:

TIP! Due to the large amount of visitors that come to the Sagrada Familia every single day, I advise you to go there early in the morning, preferably at 9 am.

How long to visit the Sagrada Familia?

With every single ticket you can stay as long as you want inside the Sagrada Familia. This implies that when your guided or audio tour is over, you can still stay inside and repeat your visit. When repeating the visit, you will see discover new details. However, when the Sagrada Familia is closing (see opening times in the header above) you are of course supposed to leave as well.

How to get to the Sagrada Familia?

Given that it is a challenge and expensive to park your car close to the Sagrada Familia, we advise you to use the public transport. You could use the metro, bus and taxi to get there.

Whether you enter the Sagrada Familia via the passion or glory façade, first have a look at the inside, including the Sagristia with old objects that have been designed by Gaudí as well. After the interior, you could visit the passion and nativity façade or the museum in a random order. The other façade, the glory façade, will not provide a tremendous view as it is the part that will be finished at end of the whole Sagrada Familia.

TIP! This article uses several terms that are related to the architecture of a church. This overview with images illustrates what these terms mean.

My guided tour started at the nativity façade and many people say that this is the most beautiful of the 3 façades. Maybe they will change their opinion once they've seen the glory façade. Nevertheless, the nativity façade contains many decorations and was one of the first elements of the Sagrada Familia to be completed. That becomes clear form the dark colour of the rocks. The naves next to the nativity façade are brighter. This façade has 3 entrance gates and the one in the middle has sculptures of i.e. Jesus, Joseph and Mary. 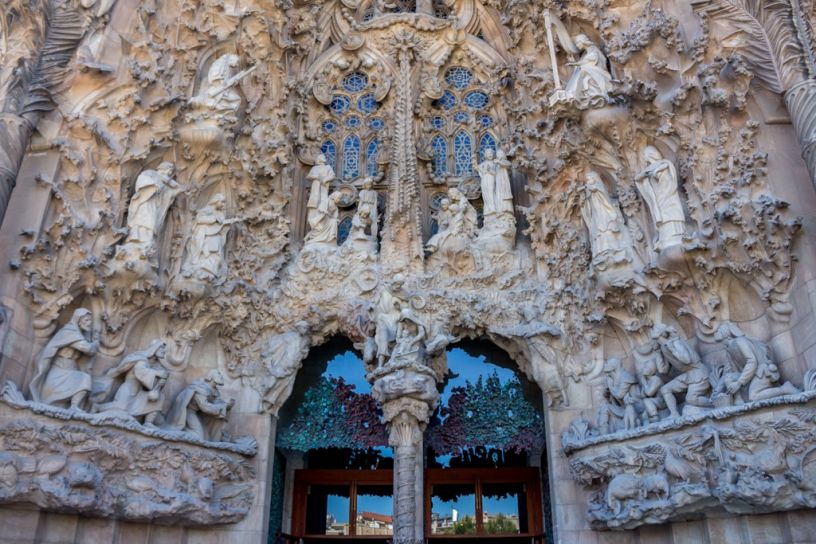 The richly decorated nativity façade of the Sagrada Familia with among others the 3 Kings.

From the moment you enter the Sagrada Familia through one of the 2 entrance gates you will fall in love. From both façades you end up in the transept. The transept divides the naves with the choir and altar. In the main nave are seats for the visitors that would like to pray. The naves next to the main nave are aisles. And the outer naves have grandstands. The grandstand at the outer nave of the passion façade are pretty high up, though the smaller grandstand at the nativity façade is positioned lower.

The walls at the outer naves have impressive stained glass windows. To enjoy the beautiful effect of the stained glass windows you will need some quality sunlight, so make sure you pick a sunny day to visit the Sagrada Familia to see it at its finest. At the end of the main nave and right against the altar is where the main entrance located. Given that the glory façade has not been finished, the main entrance is not used at all. Actually the door has only been opened once for 3 minutes, when the pope inaugurated the basilica in 2010. The door itself is decorated with Catalan mottos.

The pillars that look like trees are sure to grab your attention. These pillars branch off to the ceiling. The four pillars in the middle of the transept are the strongest since those pillars have to carry the weight of the 5 towers on the roof. The various pillars together with the sunlight through the stained glass windows makes you feel like you are walking in the jungle. Gaudí and the workmen definitely created a masterpiece! 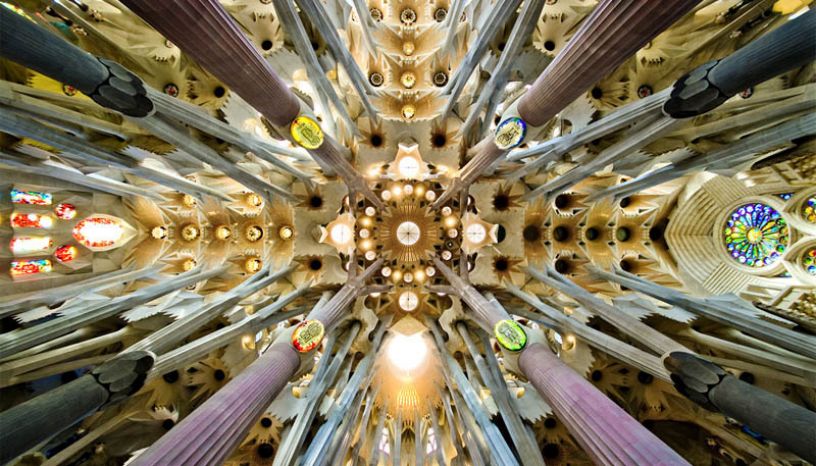 The ceiling of the naves. Note the different colours and thicknesses of the pillars and the branches towards the ceiling. An absolutely stunning view!

Before we moved on to the passion façade, the guide lead us to the Sagristia de ponent. This place is dedicated to old goods that have been used in the Sagrada Familia before, like sofa's and a confessional. In short, this place is referred to as Sagristia. The goods in this part are designed by Gaudí as well. As well as designing special and beautiful buildings, Gaudí created furniture and goods that helped the priest and other believers to pray.

The guided tour ended at the passion façade. This façade is not as richly decorated as the nativity façade, but does have some special features such as the sculptures of Judas & Jesus, the magisch box and the fantastic doors on which the New Testament is written in Catalan. On top of the doors there is a beautiful white queue with piles. Those piles have been installed some time ago and it makes the passion façade look finished. The passion façade also meant the end of my guided tour. After the guided tour I repeated the tour again individually. In this way you will discover things that you did not see the first time around. Next, I visited the museum and had a look at the crypt.

The crypt is the basement of the Sagrada Familia and is located right under the altar. There are at least 2 ways to have a look at the crypt and maybe you will discover more ways. First, when you are in front of the altar and move to the left corner you will encounter a window through which you could see the crypt. There is a chest and some burning candles. You could also witness the crypt through the museum. The view from the museum provides a front view, the view from the altar is a side view. Antoni Gaudí has been buried in the crypt as well, after he died in 1926 when he was hit by a passing tram. In the following days he died because of his injuries.

What to visit near the Sagrada Familia?

When the visit was over I left the Sagrada Familia and moved to the glory façade. As mentioned before, since this part of the Sagrada Familia will be contructed as the last part, there is not much to see yet. However, the pillars for the shell like towers are already constructed. Moreover, I was surprised by the fact that all the landings and sails had been removed, maybe indicating that they will start working on the glory façade soon.

When visiting the glory façade, try to imagine that there will be a huge bridge from the door over the Carrer de Mallorca to the other side of the great. With staircases the bridge will flow down to street level. However, when you look at the other side of the street you will notice all the apartments and the fact that there is no space for a bridge and/or staircases. There will only be enough space to construct both the bridge and staircases if the apartments are knocked down. Since the current residents of the apartments do not want to leave, you could wonder when the bridge and staircases will be constructed, if they ever will be constructed at all. For this reason I do not think that the Sagrada Familia is going to be completed in 2026.

At both the East and Westside of the Sagrada Familia you can find green zones. At the East-side there is the Plaza de Gaudí, with a small pool. Normally this pool is filled with water, but due to a lack of rain and high temperatures the pool is dry sometimes. From the park you will have a beautiful view on the nativity façade of the Sagrada Familia.

At the other side, in front of the passion façade, is another park located: Plaza de Sagrada Familia. This park has no water pool, but there is a small playground for the little kids. After your visit this park is the best one to relax and reflect on all the fantastic masterpieces that you just saw.

Restaurants near the Sagrada Familia

Why visit the Sagrada Familia?

With regards to visiting the Sagrada Familia I can be really short and convincing: YOU MUST GO THERE! The outside is already breathtaking and the inside is even more beautiful. Also, you financially support the construction of the Sagrada Familia with your visit. However, I do NOT recommend you to do the guided tour with Musement for €40. With respect however for the guide, who was enthusiastic and came up with interesting information and funny facts about the Sagrada Familia.

2. I believe that you could have more or less the same experience with the audio guide ticket (just €22). In that way you save yourself quite a lot of money.

I hope you enjoy your visit to the Sagrada Familia. In case you have any questions or you just want to share your experience, contact us on our OK Apartment Barcelona Facebook Page.