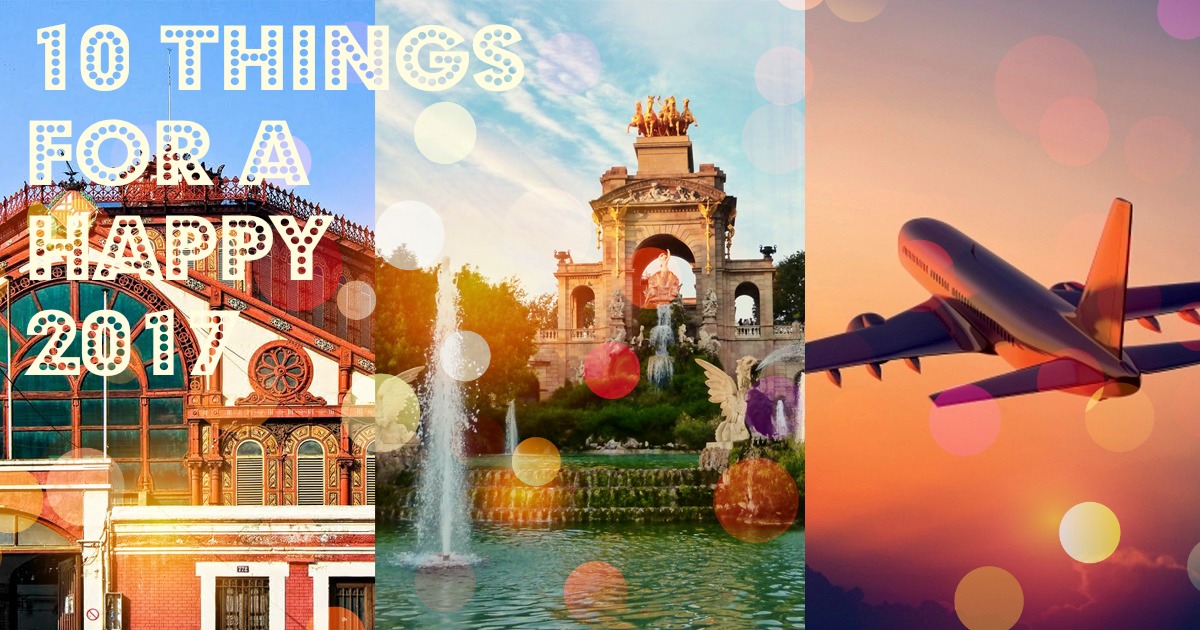 Being in Barcelona, there are multiple reasons to be happy for 2017, here are 10 of them

2017 is well and truly here, and the best way to take on the new year is thinking about all the little things that will help us to be happier over the next 12 months. It doesn't matter whether you're coming to Barcelona to visit or you have lived here for years, in this article you'll find interesting news that will give reason to fall a little more in love with the Catalan capital. In fact, if you're thinking of spending some time here, take a look at our list of apartments in the centre of Barcelona.

Barcelona continues its road to sustainability and environmental friendliness. This year it will start a project to add 308 km to its network of bicycle lanes, which will finish in 2018. Of these new lanes, 134 km will be ready in 2017. Amsterdam, we're coming for you! Soon we'll be on the same level.

One of the worst nightmares of the modern era is ending up without battery power. Barcelona has decided to resolve this problem by installing ultra-power battery chargers compatible with any USB cable. The work has begun and they're already available at certain points along Line 2 of the Metro. It's free and you can charge within a few minutes. So far they can be found at Sagrada Familia, Passeig de Gracia, Paral·lel and Universitat.

The reopening of Sant Antoni Market will take place in the second half of 2017. Along with Born Market, it's one of the best examples of modernist iron architecture from the 19th Century. After the reforms are done, there will be a new stop for the Tourist Bus to pass through. We do hope though, that its beauty won't attract the same hordes that frequent the famous Boqueria Market...

Renovation started in 2007, with an aim to finish in 2009, but workers found remains of medieval walls that once protected the city. In order to preserve them, the reopening date was put forward each year to the next one... But this time, in 2017, it's for sure. Definitely... Surely... Maybe?

4. New green spaces around the city

With the new year the city will become greener as the City Council aim to create new green spaces in the central parts of Sant Martí, Eixample and Gràcia, in addition to the suburbs of Horta, Sant Andreu and Sant Gervasi. The initiative, which involves an upfront investment of €10m, includes the construction of "green islands" that will not only increase the city's number of pedestrian areas, but also reduce traffic accidents and air pollution.

5. Endless amounts of concerts and festivals

Barcelona, as you may know, is famous for its music festivals and concerts that enliven the city all-year-round. 2017's music programme will be no different in this regard including the likes of Bruno Mars and Sting at Palau Sant Jordi already lined up. There will also be concerts by underground acts at the smaller clubs and venues, like the ones in Raval. The major festivals already on for 2017 are Guitar BCN, Primavera Sound, Sonar, Cruilla and Rock Fest. No time to get bored then.

6. WiFi on all buses

From the end of January, and in order to satisfy all those fashion bloggers, buses in Barcelona will be equipped with free WiFi. A blue W sign inside and on the front of the bus means that you're free to tweet, send emails and update your social network profiles as much as you want from A to B.

WiFi on buses in Barcelona

It may not seem like a big deal, but the simple fact that public transport costs have not gone up in a city like Barcelona is a lot to be happy about. City councils all over Europe in general cannot wait for their annual price rises, and what you end up with are costs of living like those in London. Barcelona's public transport is priced fairly at the moment, and this way it continues to be so, all the while leading the way. Well done!

Last year, honestly, wasn't one of the best for workers in Spain because a considerable amount of the public holidays fell on the weekend. "Bank Holiday" is literally a foreign concept here. This year however - especially in Catalonia - we have Christmas, 1 May and 11 September all on a Monday. Enjoy those long weekends and go looking for a quick escape for these days.

From 5 June, low-cost company Norwegian Airline opens new direct routes from Barcelona to USA. More competition means lower prices for those who want to fly to destinations like New York, Los Angeles or San Francisco. Great for those that have always wanted to visit the US, and even better news for those of us living here with family there back home.

One great achievement for travellers in 2017, which has been under process for years, is the abolishment of roaming charges. From June it will be possible to travel Europe using your phone as if you were in your home country thanks to a project of the European Union (sorry, Britain). That includes data charges involved in browsing the web. No more excuses then, time to travel!