What is World Refugee Day?

World Refugee Day is celebrated on 20 June. It aims to bring awareness of mass migration caused by wars and famine, an involuntary result of the greatest problems haunting humanity in the modern era. Every morning we wake up with new victims who are dead because of wars, bombs or drowning in the sea. While several governments from different countries put up barriers or ignore these people, cities like Barcelona are aware of the issue with citizens more and more involved.

According to figures from the International Organization for Migration (IOM), 5079 people were killed in 2016 seeking asylum in different parts of the world. As of 8 June 2017, so far this year 1650 people have died, a number that, sadly, will increase. For its part, the Barcelona City Council, has decided to create Barcelona Ciutat Refugi, a platform that not only helps to raise public awareness, but also more importantly, be involved in solving the problem as a city that welcomes refugees. With this initiative, it's also intended to advise people who were or are forced to become refugees.

On the other hand, on 18 February 2017, Barcelona hosted the largest demonstration in Europe in favour of the right to welcome these people who have been forced to leave their homes in order to survive. Now that World Refugee Day is approaching on 20 June, the city council and many associations have prepared different actions and events to commemorate this day, to make known what should be one of our greatest concerns. Below, we show several events that take place during the months of June and July around the Catalan capital. 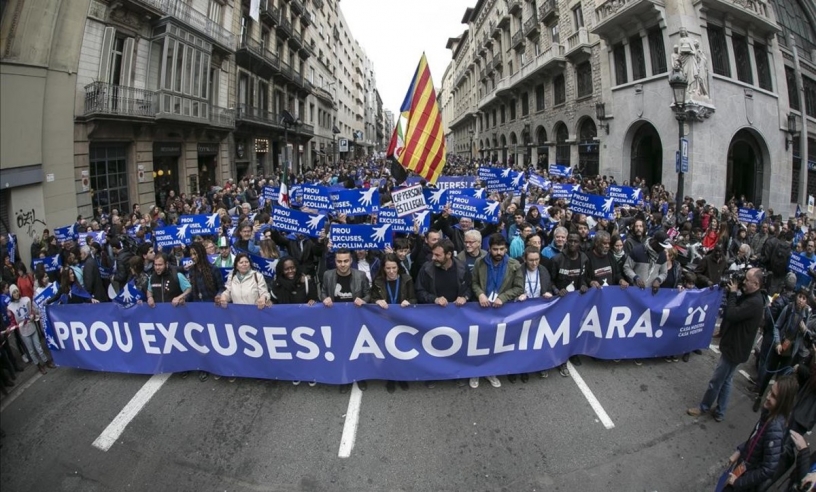 Demonstration in Barcelona for welcoming refugees

From 10 June until the beginning of July, Barcelona will have numerous activities including talks, exhibitions, cinema and theatre. The city wants to raise awareness about this cause to all who come to visit. Here we leave a selection, but if you want to see the entire programme you can do so through this link.

Exhibition "SOS: Save Our Souls"

Theatre: 'Engrunes' and debate on migration and refugees

Concerts: "Let the sea stop crying: We want to take people in".

Recital of poetry and music: Viggo Mortensen and Rafel Plana.

Documentary: Invisibles. And then a talk.

Refugee raft on the sea