Gaudí, from architecture to Catalanism

The tensions between Spain and Catalonia are not new. They've been going on for centuries before the current situation and the famous referendum of 1 October. Sometimes, famous people who take part in conflicts surprise us. The Spanish architect Gaudí was a fervent defender of the Catalan cause, which can be seen in many of his works that we review in this article.

If you prefer to see this with your own eyes, here's a selection of apartments in the centre of Barcelona to come and see Gaudí's most important works.

Gaudí's love of Catalonia is no longer questioned. In fact, through his attitude in life and works, the Catalan architect was never able to hide his love for his land, including when sometimes it wasn't very well seen.

Gaudí, who was born in 1852 and died in 1926, saw the good days of Catalonia as well as the bad. During the 19th century, this region beside the French Empire developed a flourishing industrialisation. The second half of this century was enriched in culture thanks to a movement called the Renaixença. This cultural movement made it an honour to maintain Catalan culture and language. Gaudí contributed enormously to this movement.

The beginning of the 20th century is quite different. In 1923 after an attack on the state, Spain was led by Miguel Primo de Rivera, who imposed his dictatorship until 1930 with support from King Alfonso XIII.

Catalonia was deprived of its rights and freedom, including the paralysation of institutions. The Catalan Commonwealth (Four Catalan Councils: Barcelona, Girona, Tarragona and Lleida), which was the predecessor of the current Catalan Government, was obligated to close its doors. The prohibitions against Catalans multiplied; the dictator ordered total submission on their part. Therefore, it was prohibited to speak in Catalan in public. Primo de Rivera also banished specific symbols of the region, such as flags, anthems, etc.

In 1928, the dictator destroyed the four columns of Montjüic — a Catalan symbol in reference to the four stripes on the Catalan flag — for the 1929 Barcelona International Exposition. He also named the event location "Plaza de España" (Spain Square), to emphasise its Spanish — not Catalan — character.

The dictatorship ended in 1930 with the renouncement of Primo de Rivera, and Catalonia gradually recuperated some rights and freedoms with growing autonomy. Gaudí regrettably never saw this. He died on 10 June 1926, before the resignation of the dictator. 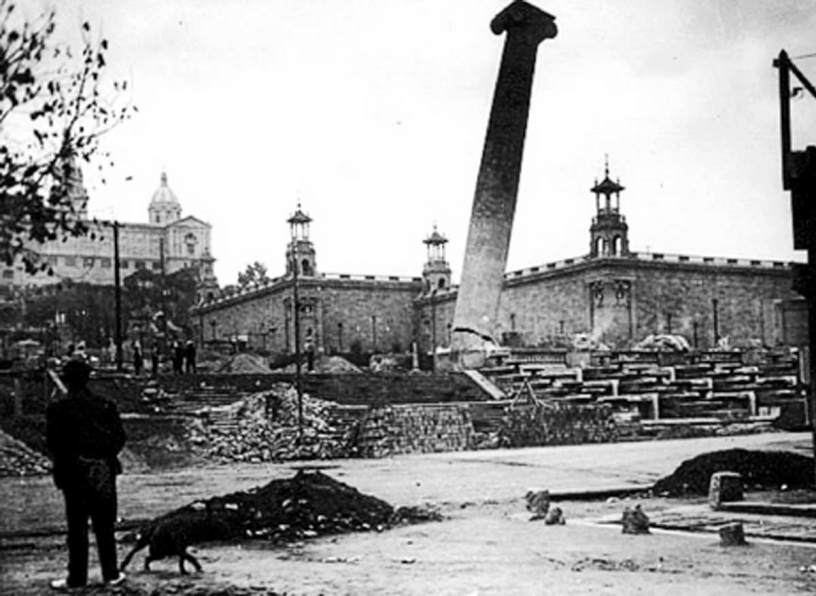 The columns of Montjüic being knocked down

Gaudí has always been one of the biggest defenders of the Catalan language. Therefore, weary of not being able to speak Catalan in public, he chose to ignore the prohibitions and even gloated about not respecting them. The architect would usually express himself in Catalan as soon as he was presented with the opportunity, regardless whom he was addressing, even King Alfonso XIII.

While the Spanish authorities closed churches on 11 September 1924 to prevent the Catalans from celebrating their national day, Gaudí challenged this prohibition and headed for the church of Sant Just i Sant Pastor. The artist wanted to pay homage to the Catalan heroes who died in the battle defending the freedom of the region.

He was arrested and taken to a police station, where Gaudí refused to speak Spanish. The architect accused the police of insulting him, but in any case, the Catalan artist was released with a fine of 50 pesetas.

Love for Catalonia in his works

Gaudí has distinguished himself throughout his career thanks to his innovative architecture and deep roots in the culture of the region. During the second half of the 19th century, the artist participated in the Renaixança, a movement which aimed to put Catalan culture and language back on the scene.

Sparked by this movement, the architect went on to become one of the main artists to steer Catalan Modernism. Let's take a look at some of his most emblematic works in which he left messages: 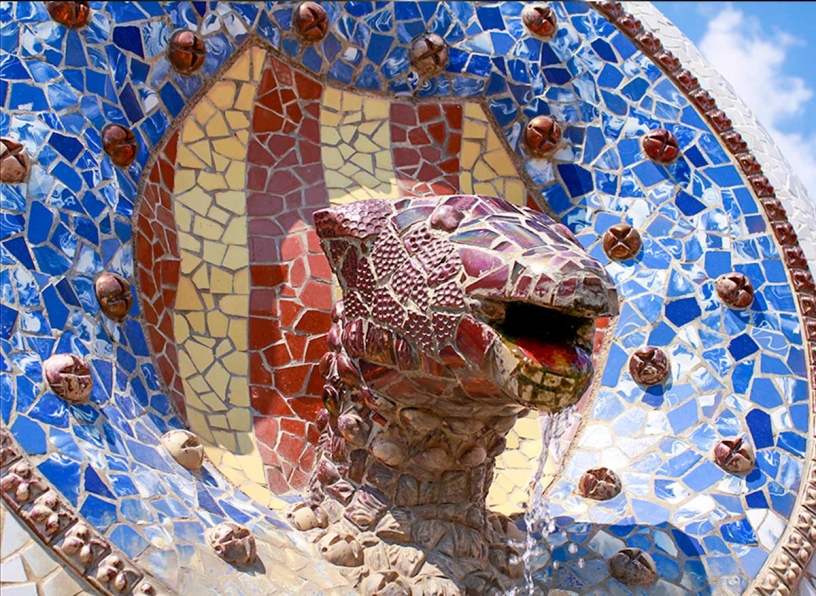 Catalan symbols in the works of Gaudí

Hounded by tourists in the summer, Park Güell is without a doubt one of the most recognised places in Barcelona. The park, situated in the upper area of the city, wasn't designed as a park in the beginning.

Commissioned by Gaudí's patron, Eusebi Güell, Park Güell was an estate designed to accommodate wealthy families. That's why it took the form of a city garden, such as the ones you can find in England. Due to the excessive cost of production, the architect was only able to build three of the sixty homes he planned over the estate's 17 hectares. However, he did finish the famous Room of 100 Columns, Dragon fountain, Nature Square and many other spaces.

Gaudí took advantage of the design to include some references to his beloved land. For example, in one of the fountains you can find the Catalan flag in mosaic. The architect also represented his land in various places with a dragon, in reference to the legend of Saint George, patron saint of Catalonia. Gaudí was more than happy to allow the site to be used for the First Congress of the Catalan Language after party in 1906, while it was under construction!

If you want to know more about the famous Park Güell in Barcelona, here's an article explaining its origins, what you can find there and the entry conditions if you plan to visit.

Casa Batlló, situated on Passeig de Gràcia 43, was built under the guidance of Gaudí from 1904 until 1906. It's typical Catalan modernism and one of the most emblematic pieces of architecture in the city. Its symbolism has been interpreted in different ways, but one thing is certain, Gaudí once again uses this work to express his love for Catalonia.

As explained by Lluïs Permanyer i Lladós, writer and journalist from the city, the symbolism of the house itself retells the legend of Saint George. It symbolises good overcoming evil. One can find the dragon whose backbone is composed of the façade of the building and whose scales are the roof, initially blue, turning red on the left side due to the animals wound. The spear that pierces the dragon is crowned with a cross marked with the initials JHS, M, and JHP (Jesus, Mary, Joseph). 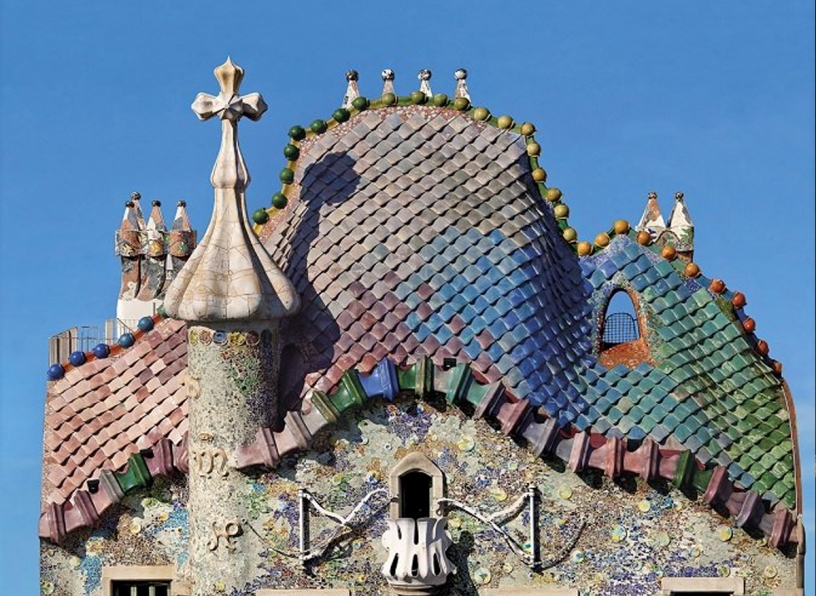 This is probably Gaudí's most known work, however, he only directed a part of it because he died during construction. Even today, the Sagrada Familia is still being built based on interpretations of his designs. Yet, every year it receives millions of visitors who are curious to discover this extraordinary work.

The construction of the Sagrada Familia, Gaudí's last work, took place during a period of dictatorship in Spain during which many restrictions were imposed on Catalan people, especially in Barcelona. An ancient decree commanded by King Felipe V demanded that architects must not not construct buildings in Barcelona to be bigger than Torre de Sant Joan. The citadel where it stood was a symbol of the Catalan suppression to the Kings of Spain, it also made it easier to bombard the city.

Although the tower was already destroyed by this time, Gaudí wanted to show his disapproval of these past limitations. He used the Sagrada Familia as a way of making fun of this. The architect planned to build towers approximately 130 metres in height, with a central tower of 170 metres.

Unfortunately, Gaudí died too early in a traffic accident and was only able to see the development of the first bell tower, which is 100 metres tall, but he had already defied the ancient prohibitions. The architect wanted to show the grandeur of Catalonia and his yearning for freedom from the rules suffocating Spain.

You'll also notice that any texts that are part of the architecture are written in Catalan. 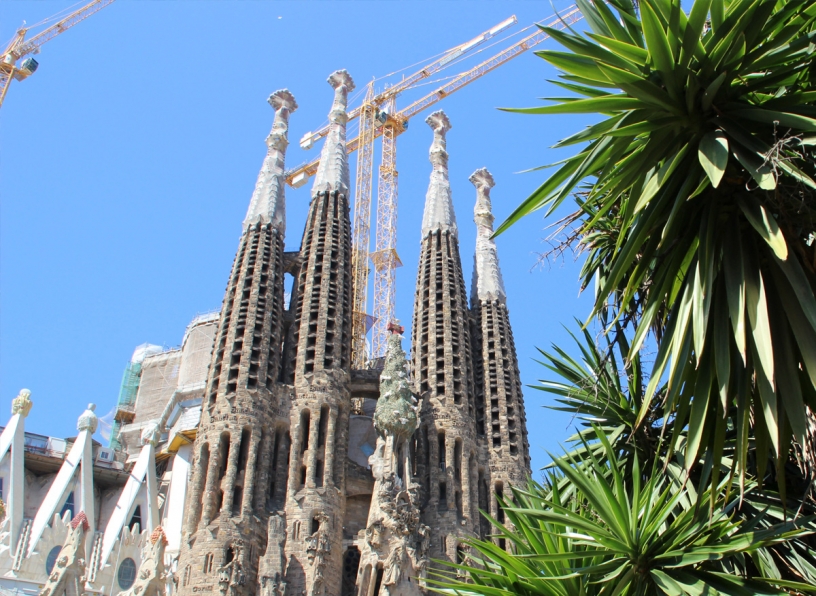 Was Gaudí a staunch advocate of independence?

No, at least not openly. However, he was without a doubt a Catalanist. Catalanism doesn't necessarily mean independentist.

In fact, Catalanism is a stream of cultural thinking that was created in the 19th century to promote everything specifically to do with Catalonia, such as its language, culture and rights. Even if this tendency could lead to some form of nationalism, it was not initially to reclaim an independent Catalonia, rather the identity of Catalonia.

It can be said with certainty that Gaudí was a Catalanist because of his clear love for his land and willingness to show it. We cannot say for sure whether or not he was an Independentist.

He lived in a different era, so the problems for Catalonia were not the same as the current ones. Gaudí wanted to be able to speak his language in public without being punished and to be proud of being Catalan without the wrath of Spanish authorities.

So in this context, we cannot say whether Gaudí was calling for Spain to see Catalonia as a federal state, recognised nation within Spain, autonomous region, independent or something else when he said:

"For the same reason, the day that Catalonia enjoys the power that corresponds to it as a natural entity, it will change everything in such a way that they will be the most ardent defenders of the spirit of the people"
— Gaudí, 1917 during an interview with Vila-Nova Newspaper

Finally, even if Gaudí always adhered to Catalanism, he didn't go out of his way to engage actively in politics, even though various politicians such as Francesc Cambó or Enric Prat de la Riba proposed it. Gaudí transmitted a love for Catalonia through his art, but that should not necessarily be seen as a political position, but rather in the very least a desire to claim a very often neglected Catalan identity at the time.