All transport options and advice for getting from Barcelona's El Prat Airport to the city and back.

You're coming to Barcelona. The tickets are bought and you have the perfect accommodation. Great. So how do you get to Barcelona from the airport? Since February 2016, it's been possible to get to the city via Metro, but it's not always a good option. For this reason, we've made an up-to-date analysis of all the public transport options available. It will help you to choose the best way for you depending on where in Barcelona you will be going and how much you want to spend.

The first part also has a 2-minute summary video of this article. Then we cover all the information about each type of transport option including stops, price, journey time, frequency and other observations.

How to get to Barcelona Airport — A two-minute video

From transport options from cheapest to most expensive:  Bus 46 and Night-bus N17, Train, Metro, Aerobus, Taxi.

If you're going outside the centre: The cheapest option is the train. You will get to Sants Station in 18 minutes or Passeig de Gràcia in 23 minutes. From here you can interchange to the Metro using the same ticket with no extra cost, if you have a T-10 ticket. A single ticket costs €2.50, or €0.99 with the T-10.

The T-10 is a travel card loaded with 10 trips and costs €9.95. It can be used on buses, trains, trams and the Metro. However, you're not allowed to use the T-10 to take the Metro directly to and from the airport, there is a separate ticket for that mentioned below.

If you're going to the centre: Catch the Aerobús. It costs €5.90 but goes directly to the heart of Barcelona in 30 minutes in just two stops. Other advantages that it has are its spaces for suitcases, free Wi-Fi and charging stations.

If you're going outside the centre: The easiest way is via the Metro. You won't need to interchange with other modes of transport and the network covers the entire city. In this case you can't use a T-10 ticket as there is a special ticket called an Airport Ticket that costs €4.50. Keep in mind that depending on which part of the city you're going to, the journey time is from 26 minutes up to over an hour.

The most convenient but expensive option

If you want to get to any part of Barcelona comfortably regardless of whether it's day or night, then catch a taxi. It will cost about €30 but it will drop you off at the door of your destination, also making it the fastest option in most cases.

Take a look at this infographic, which shows each transport option for going to and from Barcelona and El Prat Airport. 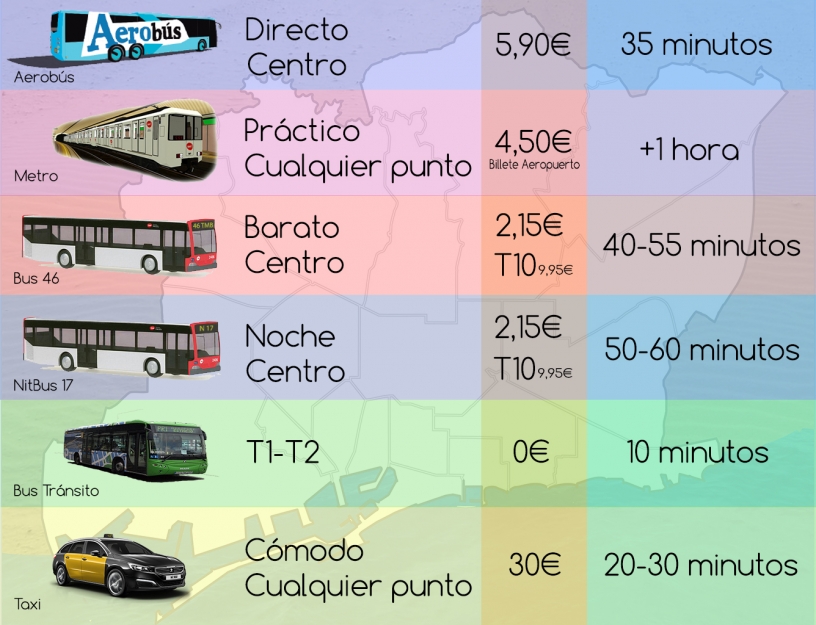 Options for travel between Barcelona and its airport

The most common option people choose to make the trip to Barcelona would be the Aerobus. It has two separate bus routes that run directly from Terminal 1 and Terminal 2 of Barcelona Airport to the city centre.

You can buy a ticket from the blue machines next to the stops at both terminals of the airport. If you're in a rush you can also pay the driver directly, but make sure that you have change or notes no larger than €20, otherwise the money will not be accepted.

It's very easy to recognize this bus. It's light-blue and has the word Aerobus in big letters across its sides.

You can check schedules and prices on the website of the Barcelona Aerobus. 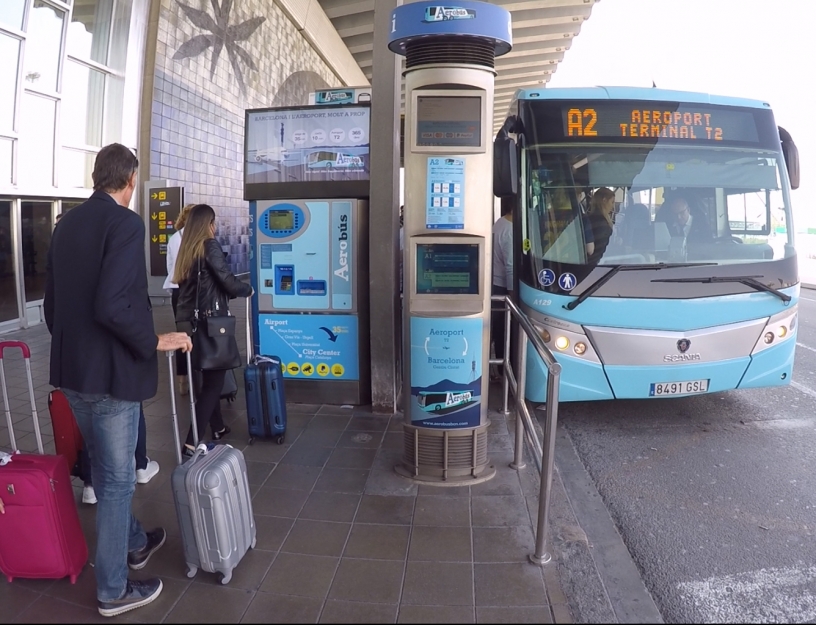 This is the cheapest option on a single ticket. It's a public transport service from TMB (Barcelona Metropolitan Transport) that unites the airport with Barcelona along with a number of stops across its route.

The T-10 is a travel card with 10 trips that can be used across Barcelona's transport network. You will need to buy the ticket beforehand at the airport or a station. You cannot buy one from a driver.

40–55 minutes from the airport to the city centre and vice versa.

It's good to keep in mind the frequency and journey time so that you can leave well ahead of time and arrive without being in a rush. 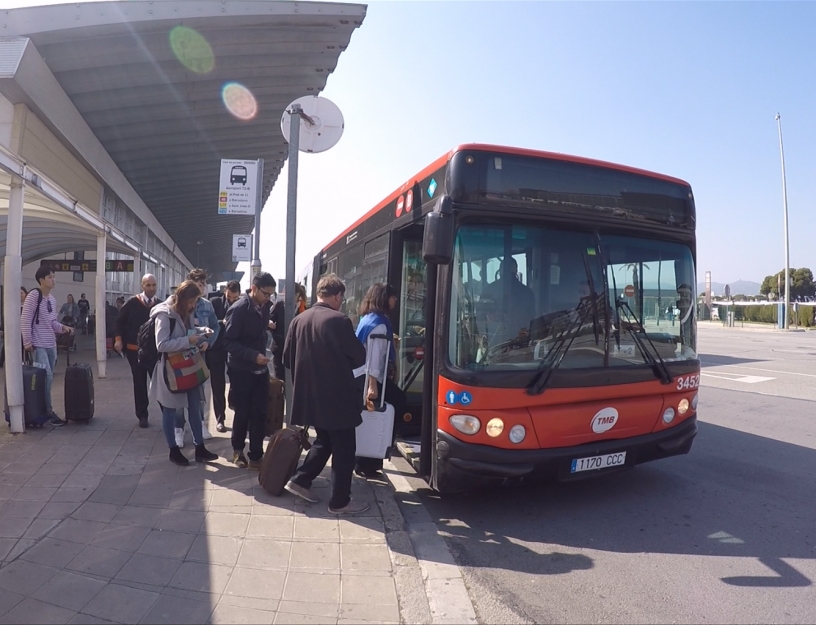 The N17 night bus — from a contracted company called NitBus — is the night-time equivalent of the 46 bus and runs when most transport options are unavailable.

The T-10 is a travel card with 10 trips that can be used across Barcelona's transport network. You will need to buy the ticket beforehand at the airport or a station. You cannot buy one from a driver.

You can check on the arrival hours of the night bus by looking on its website. 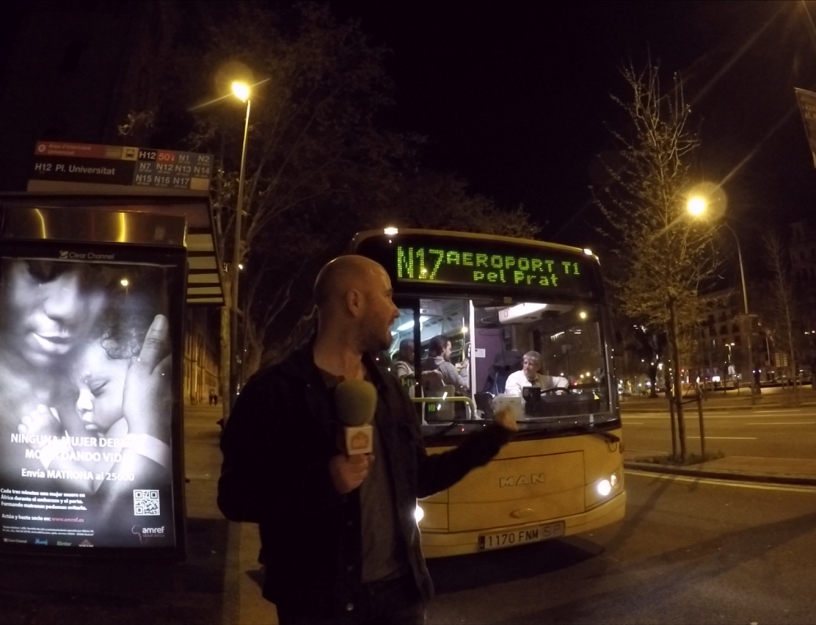 This is a convenient option as you can get to your destination at any point of the city without interchanges between different transport types. It is an automated Metro train.

Travelling using the Metro from the airport is different than usual because it has a special tariff. The so-called Airport Ticket costs €4.50 and is one-way, but can get you to almost any point in the city. If you have a T-10 travel card, while it will work in every other station around Barcelona, it won't be accepted at the airport where you need the special ticket to enter or leave.

After departing from the airport Metro station, the first official stop in Barcelona is Zona Universitaria (Line 3).

About 1 hour between Barcelona Airport and the city centre.

Another cheap transport option to get all over the city is via train. Line R2 Nord from the RENFE train company will take you from the airport to the centre of the city and beyond to towns like Granollers.

A single ticket can get you to the city centre but if you want to interchange with the Metro you'll have to buy another ticket from the ticket machines available at any station.

TIP: It's highly recommended to get a T-10 ticket upon arrival. If you have a T-10 travel card, in addition to the trip by train only costing €0.99, you can interchange with the Metro and/or bus for free within 1 hour and 15 minutes of your journey start time. It has an upfront cost of €9.95, but you will definitely end up using public transport at least 10 times in Barcelona. You can buy a T-10 at the airport or any station.

In Barcelona: Passeig de Gràcia and Barcelona Sants. There is also El Clot (a bit further from the centre).
At the airport: The train station is in Terminal 2, so if you arrive in Terminal 1 you will need to take the free transfer bus between the two terminals, it will drop you off in front of the train station.

We recommend taking a look at this link to consult the exact timetable using this link so you can calculate your journey time in advance before leaving home.

It's both the most comfortable option but also the most expensive. If you have lots of luggage, you'll be dropped off right by the door of your destination without having to walk and drag cases along. It also avoids the more crowded hours of public transport.

€30–€35 (Depending on the tariff and extras such as number of suitcases).

TIP: Catching a taxi from Barcelona Airport – wherever your destination may be – costs a minimum of €20, even if your journey is only 5 minutes. If that's the case, then it's better to choose another option. Keep this in mind if you're staying in an apartment close to the airport.

There are taxi stands by the exit of each airport terminal.

TIP: You'll see that you can't catch a taxi from wherever you like; you have to find one in the designated taxi stand. You may find a queue, but you'll have to wait in line, which doesn't take that long.

Immediately from the airport.

20-30 minutes directly to your destination.

You can recognize taxis in Barcelona thanks to their combination of yellow and black colours.

If you would like more information about Barcelona's taxis you can find the official tariffs, telephone numbers to request specially adapted vehicles, customer service and lost & found services via the official website. 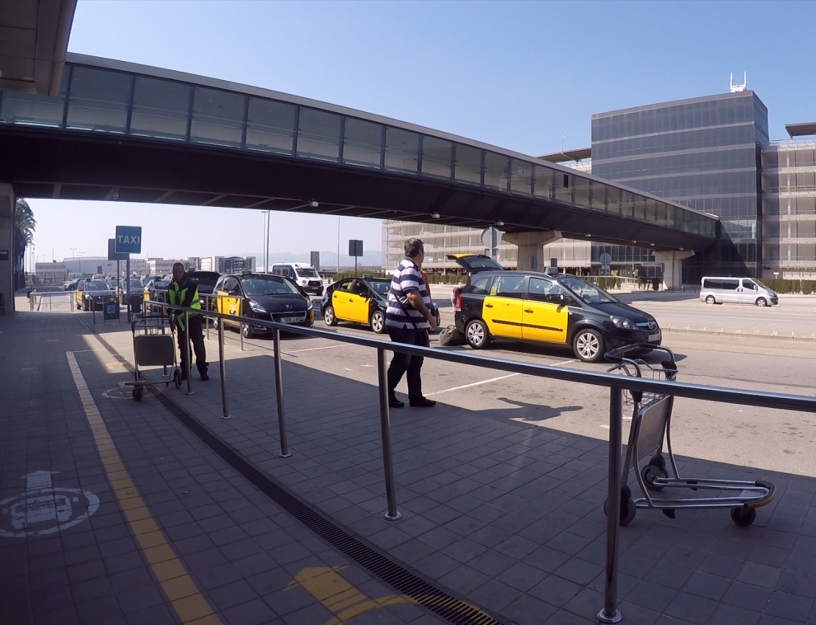 The option with the most freedom. It's not the cheapest option though. Also, Barcelona is more a walking city because it's so hard to park up in the city centre... However, if you plan on travelling and discovering Catalonia outside of Barcelona then it's essential. It's especially good if you're travelling as a group because you can split the costs and get a price that makes it really worthwhile.

Some of the rental car companies that you will find directly at El Prat Airport are Avis, Europcar, Hertz, Enterprise and Solmar. They will let you choose a car that best adapts to you and your budget. You can search the internet beforehand to get a better idea of these companies or find a better deal.

7AM–12AM in both terminals.

Definitely not recommended. According to Google Maps, walking from Barcelona's El Prat Airport to the city centre (Plaça de Catalunya) would take 3 hours and 5 minutes. It's much better to use one of the many transport options available.

If no-one can convince otherwise, well at least it could be an acclimatizing experience to get off the plane, prepare your legs and make an epic journey towards what awaits you... Barcelona.

Here's a map of the route to give you an idea.