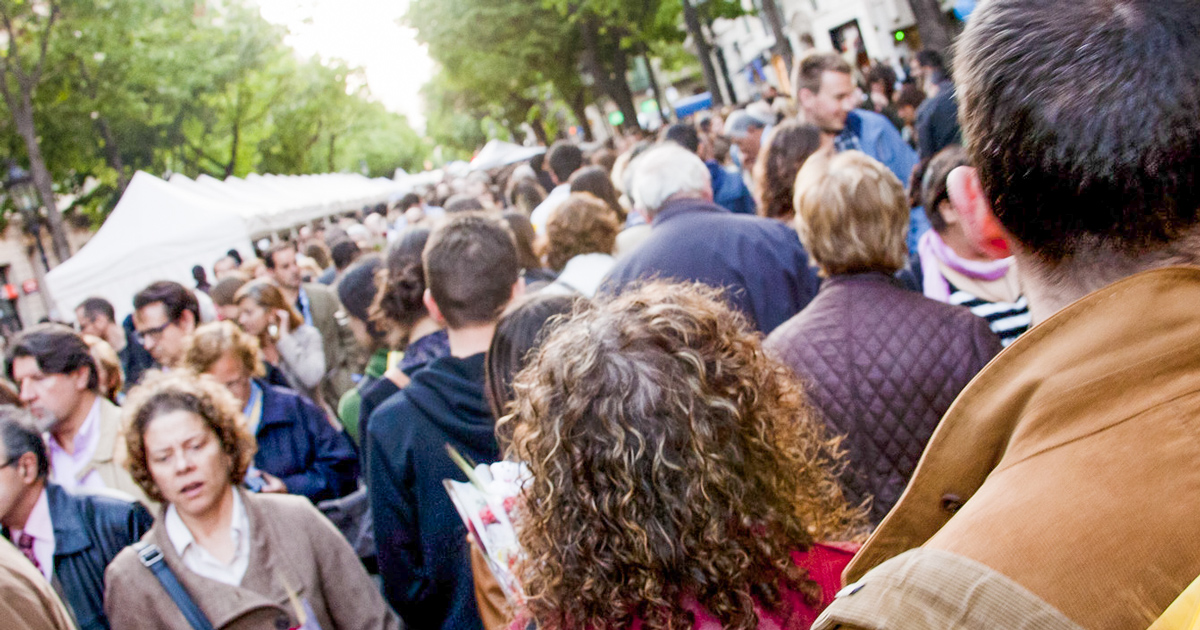 Participants responded to the question "What do you least like about the city?" in an open-ended question and in the upcoming analysis we have summarised these answers into 9 negative factors.

The biggest named defect in Barcelona amongst expats was its mass tourism. Over 1 in 3 respondents (34%) that live here affirmed that the city has a level of mass tourism that they dislike. Other relevant negative factors that appeared include local character (26%), pollution (19%), and the economy (16%).

Analysing this question we arrived in a natural way to the problem of the amplification of tourism. In this article we we define the problem of Barcelona's version of mass tourism and outline the solutions being taken by local authorities by which we propose a new motion of action.

We include an infographic as a graphical summary as well as video interviews with expats. Do you agree with the respondents of this survey? You can leave a comment on this page.

The survey includes 850 people of 26 nationalities, with the requirement that they have been living in Barcelona for at least 3 months. The survey includes a total of 20 questions and in the next upcoming press releases we will analyse more questions including the reception from the Catalans, what expats like most about Barcelona, opinion on the referendum on self-determination, and interest and knowledge on the local Catalan language.

Respondents commented everything they dislike about Barcelona in an open text in which they mentioned one, two, or three negative aspects. No-one mentioned more than three and the average was 2.1. To give more value to the results of this question we avoided giving a closed-list of predetermined answers.

We categorized the answers and 99% of them can be summed up within 9 negative factors about the city which are numbered throughout this study. 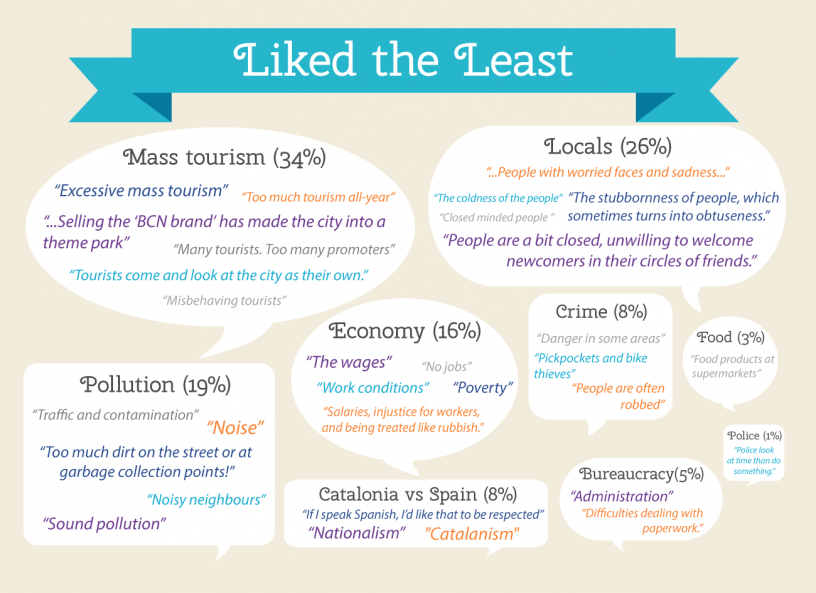 The negative factor by far mentioned the most was mass tourism. Just over one in three expats (34%) affirm that Barcelona has a level of mass tourism that they do not like.

A lot has been written on mass tourism in Barcelona, but this is the first time it has been done soley from the perspective of expats many of whom started off their time in the city as "outsiders", allowing them perhaps to form a more objective view on Barcelona's weak points.

The infographics demonstrate that amongst the surveyed nationalities it was Polish (54%) and German (38%) expats that had the highest percentage that disliked mass tourism. The nationalities that were bothered the least by mass tourism were Russians (26%) and Argentinians (25%).

A selection of some of the comments were:

"Excessive mass tourism" / "Too much tourism all-year / "Selling the "BCN brand" has made the city into a theme park" / "Many tourists. Too many promotors." / "Tourists come and look at the city as their own", / "Misbehaving tourists"

We consider the problem in 3 steps: The data, the problem, and the solutions.

It's the 4th most visited city in Europe after London, Paris, and Rome, despite being smaller. It has the leading cruise port in the Mediterranean. However, it has come to depend on the wealth produced by tourism, which accounts for 20% of its Gross Domestic Product (GDP).

The main problem is the sustainability of tourism and the effect it has on the quality of life for citizens. Growth in tourism has transformed certain parts of the city such as Barceloneta, Las Ramblas, the Sagrada Familia, and Park Güell areas.

Tension between neighbours and mass tourism has resulted from the following:

For some time, local authorities have been taking measures to mitigate the negative effects of mass tourism. Current policies however, are mainly aimed at the regulation over the supply of accommodation.

On 23 February 2016, an outline for such as regulator was presented called Pla Especial Urbanístic d'Allotjaments Turístics (PEUAT) or Special Urban Tourist Accommodation Plan. This regulator will control all kinds of accommodation including hostels, hotels, Bed&Breakfasts, and apartments. 73 neighbourhoods in Barcelona exceed 6.4 tourist beds for every 100 habitants.

This plan is a basic part of the solution of Barcelona's tourism model, it highlights two objectives:

Through accommodation, the council wants to encourage equitable sharing of tourism's benefits throughout all parts of the city while decongesting areas under a larger environmental and social pressure.

We have many years of experience in the field of tourism and know that many visitors are interested in experience an authentic and un-touristic version of Barcelona, but don't due to lack of awareness. Accommodation in further parts of the city isn't enough to get visitors to detour to these areas and outside the city.

New York, for example carried our a campaign called Neighborhood x Neighborhood. In the most visited American city, in 2013 they designed a campaign to encourage visitors to discover the offering in 5 neighbourhoods beyond Manhattan. Thanks to this they spread visitors throughout these areas, which have benefited from the increased economic activity.

Another exemplar campaign from New York is more recent one called "Unlock NYC", which adds a focus of not just on spreading tourists across space, but time also, by inviting tourists to visit during off-peak seasons. Something that hasn't yet been done in Barcelona, encouraging tourists to see the benefits of visiting in the winter despite the differences in weather.

Along the lines of Neighbourhood x Neighbourhood, Barcelona has a similar but isolated initiative in the Horta-Guinardó district - 10 routes related with history, beautiful views, and culture of the area. But as is plain to see, it's only available in Catalan, meaning it is practically inaccessible to tourists. A political will is needed to universalise initiatives like these and promote the activities in areas beyond the usual scope of tourism.

26% of the mentions comment on the cold and closed-off character of Barcelona locals - principally Catalans:

"Closed-minded people" / "People with worried faces and sadness..." / "The coldness of people" / "The stubborness of people, which sometimes turns into obtuseness" / "People are a bit closed, unwilling to welcome newcomers in their circles of friends"

Despite this over 50% consider the reception from Catalans to be excellent or good. We will look at the reception from Catalans and local character in more detail in another article. Those that comment most are Argentinians (45%) and Russians (29%) and least are Germans (17%) and Polish (17%). It's unsurprising almost half of Argentines - with a stereotypically fiery Latin character - feel the coldness of the locals the most...

The third most commented negative factor was pollution. This was mentioned by 19% of the respondents, who broke it down into three aspects. By order of importance: Noise pollution, dirty streets, and air pollution:

"Traffic and contamination" / "Noise" / "Noisy neighbours" / "Sound pollution" / "Too much dirt on the street or at garbage collection points!"

Economic problems only appeared mentioned by 16% of respondents, commented mostly by Polish (23%) and Russians (22%)

"Work conditions", "No jobs", "Poverty", "Salaries, injustice for workers, and being treated like rubbish", "The wages"

According to the latest study from the Centre of Sociological Investigations in Spain, people who live in Spain worry mostly about unemployment (78.8%), corruption (43.7%) and the economy (25%). We would have expected a higher percentage of respondents concerned by economic factors, but perhaps a logical reasoning behind this is that in order to get a NIE now in Spain (an ID number for foreigners), you need to either be economically stable (with more than €5000 in your bank account) or have a job here.

Video interview asking expats what they dislike about Barcelona

In the video below we present an audiovisual survey and some comments from expats living in Barcelona who have not participated in the survey. It was recorded on 15 February 2016 in Raval, Gothic, and Sant Antoni areas.

We highlight a response coming from Ciutat Vella, where the streets are narrower and probably dirtier than other neighborhoods.

"The people are a bit dirty... Barcelona is the city that smells of marijuana or pee."

Take a look at see what other people had to see about the city too.

What do different nationalities dislike about Barcelona? 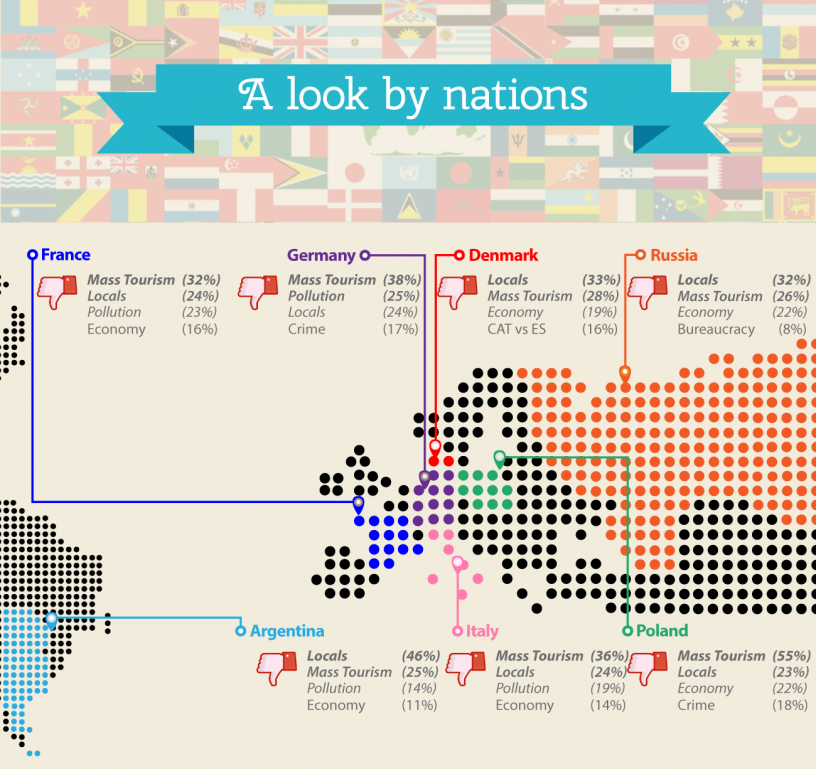 Dislikes of Barcelona according to country of origen

The survey was carried out between the 1 June and 31 December 2015. 88% of respondents used an online form and the remaining 12% printed paper.

The general characteristics of the sample are

Motives for coming and intention to stay: 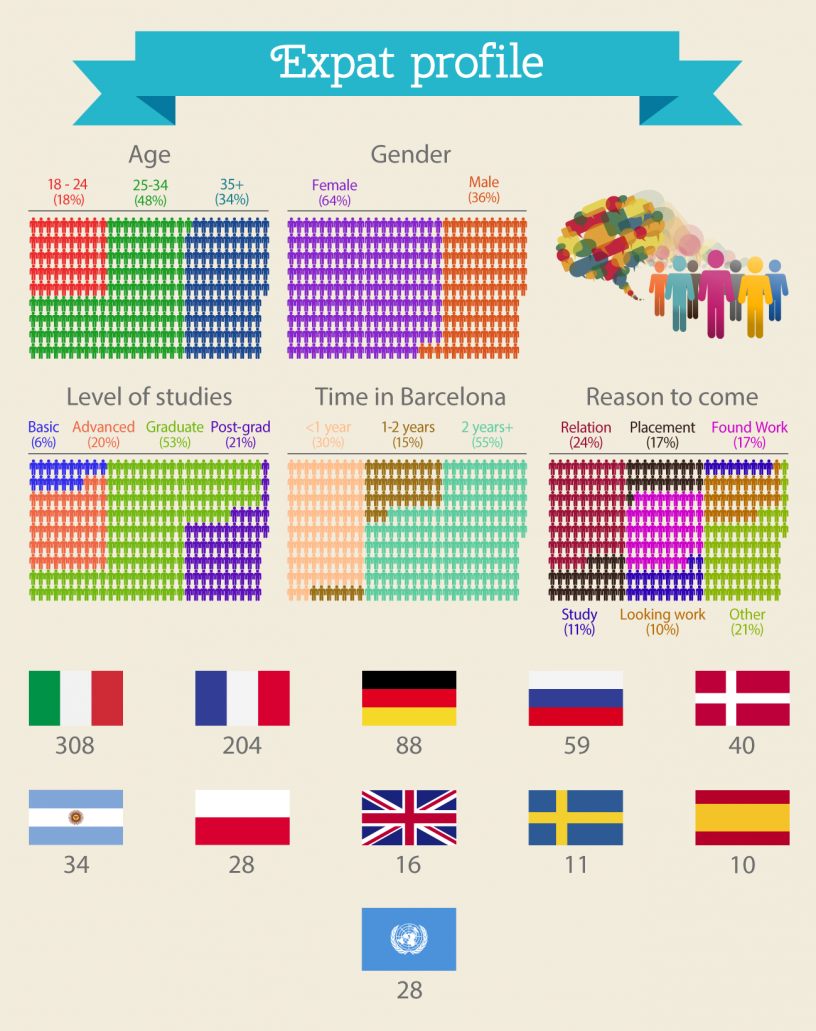 Demographic of the study sample

Full infographic - What do expats dislike about Barcelona?

Want to use this infographic on your website or blog?