Another marvel from Antoni Gaudí i Cornet

Out of the most popular works by Antoni Gaudí i Cornet, practically all of them can be found in Barcelona, however, one stands alone around 10km outside the city, in Santa Coloma de Cervelló. Those who visit Barcelona and fall in love with the work of Gaudí will not want to miss out on detouring to Colonia Güell.

The Glass Windows of the Church

What is Colonia Güell?

Interestingly enough, Colonia Güell is a mini-city, the idea of which was thought up none other than Eusebi Güell. Along with Park Güell and Palau Güell, Eusebi requested that Gaudí design and oversee the construction of this area for the workers of his textile operations on the outskirts of Barcelona.

As a lover of art with lots of money to spend, the choice of Gaudí for the project was a no-brainer for Mr. Güell.

The city was to be self-sufficient, with housing areas, shops, hospitals, sports facilities, theaters, and a church. Gaudí was chosen because of his ability to transmit beauty and a sense of well-being in his work. In fact, the housings in the area are made with bricks, have few floors, and are surrounded by plazas and gardens, creating a sense of harmony and a layout very different from other dormitories at the time.

Though it may sound like Eusebi Güell cared way too much about his workers in a time when worker rights were non-existent, don't threat, for the reason behind Colonia Güell was to move his workers just outside of Barcelona in order to isolate them from the uprising of worker syndicate movements in the city.

The Crypt of Colonia Güell

The most famous building in the Colonia is without a doubt the crypt by Antoni Gaudí eloquently known as the Iglesia de las Columnas Torcidas or Church of the Wonky Columns. It's obvious where the name comes from and every single detail of this church is its own masterpiece, from the windows to the porch.

Gaudí was given complete freedom over the Colonia project in terms of creativity, budget, and even timeframe. However, as a religious man he focused mainly on the church and delegated projects elsewhere to his assistants.

A highly recommended day out! Even if it's Unfinished.

The rest of the area is of course, worth discovering, but it really is this church that captures the attention of visitors, and rightly so. Apart from looking beautiful, there is a sad ending to the tale of the Iglesia de las Columnas Torcidas.

The Wonky Column Church, though a masterpiece, is largely unfinished and what is there today is but a single crypt from what was to be. This is because the Güell family decided to stop funding the project in 1914, effectively putting the idea into a state of limbo for eternity.

The Church was supposed to reach a height of at least 40 metres. It was highly ambitious and combined almost every single one of the techniques he had used in previous projects into this church. All that effort wasn't lost however...

Gaudí would go on to use techniques and styles from this project and apply them to the Sagrada Familia. Or so they say. Judge for yourself with the design sketch that Gaudí left of the completed building. 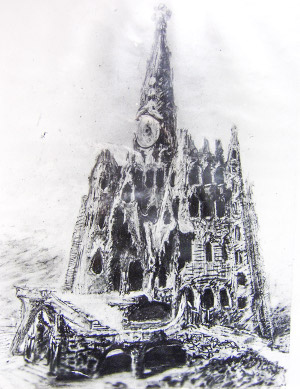 Colonia Güell is a must visit for Gaudí fans, and you'll find all the classic elements from this architect within this amazing piece.

Glass windows from Outside

You can take a look at what people are saying on TripAdvisor about Colonia Güell:

Besides of Gaudi it is very interesting place from the point of historical view. The church was not finished but worth of seeing and you will also see Colonia Guell to understand better what Sr.Guell made for Barcelona.