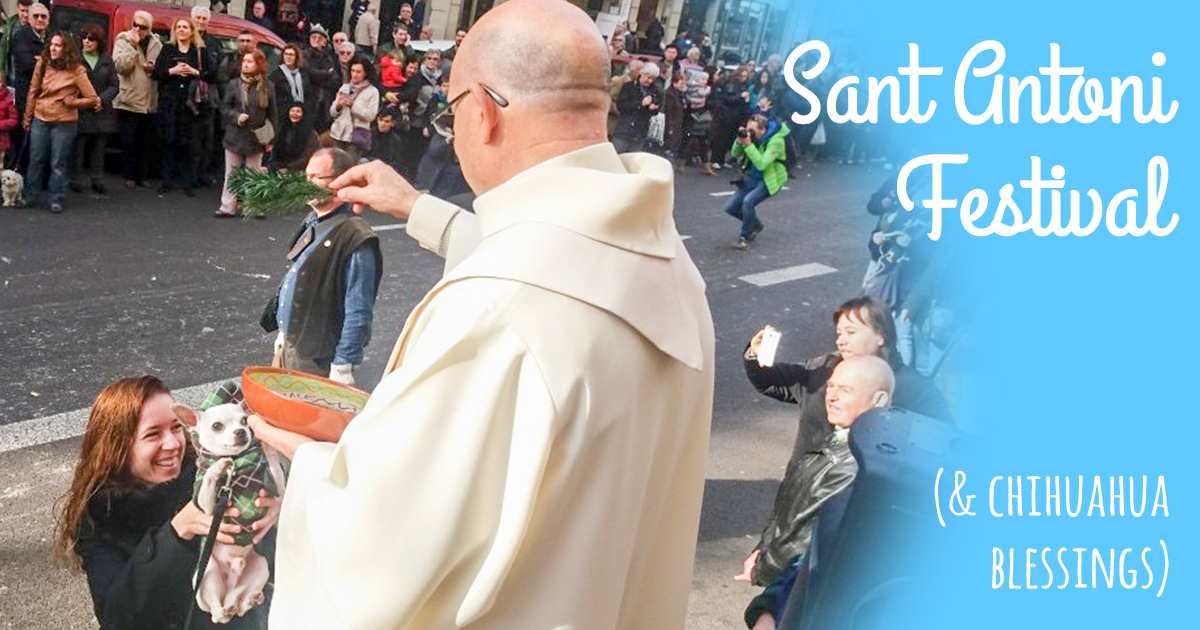 During the festival, there are two traditions related to the Christian saint that are very similar to those found in other countries during the celebration of Sant Antoni: (1) The Els Tres Tombs Parade and (2) the pig’s raffle.

The program includes Catalan traditions such as the Awakened, the Giants Parade and the Correfoc, as well as a photography contest, a poetry marathon, a handicrafts fair, hot chocolate, multiple concerts, children’s shows etc.


History of the Event and Neighbourhood

These festivities have almost 200 years of history as they date back to the urbanisation of this area in Barcelona.

This neighbourhood is called Sant Antoni because there was an old access door to the walled city here, known as Portal de Sant Antoni. In the Middle Ages, this door was one of the main entry ways to Barcelona, but during the second half of the nineteenth century, the neighbourhood began to develop and the wall was demolished. In 1882, the construction of the market began.

San Antonio Abad is a saint deeply rooted in the territories where Catalan is spoken and many celebrations are held in his honour. The Portal of Sant Antoni, which was on the medieval wall of Barcelona, was named after the old church in the area where Sant Antoni Abat Road is located, in the district of El Raval.

It seems that Sant Antoni was born in Egypt in 251 AD and the legend says he was a friend of animals. That’s why he is the patron of companion animals and traginers (mule driver) who were the people who transported goods with animals. The Saint is represented with a beard and a cane or a book. It seems that Sant Antoni was always accompanied by a little pig who followed him as thanks for having healed him. At the event, we will see traginers strolling through the modern city and giant bomb-proof pigs... 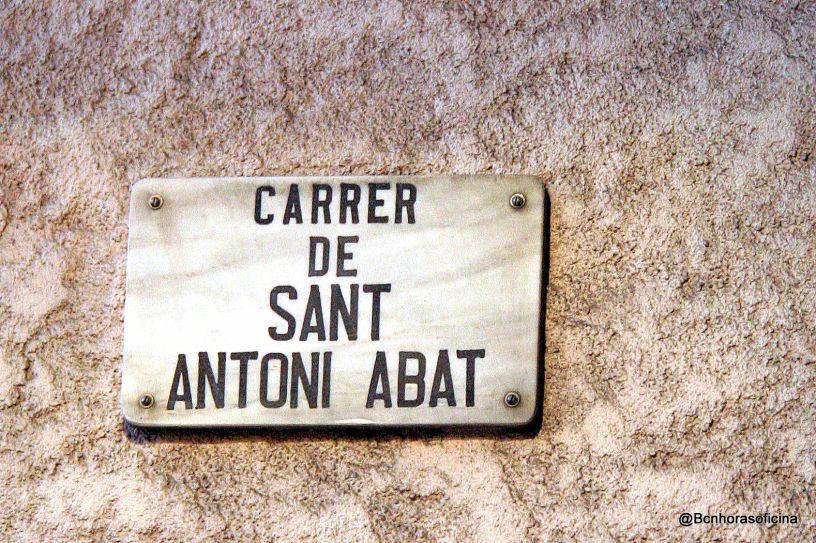 San Antonio Abat Road in the neighbourhood of El Raval

We will now tell you about the most authentic and ancient events of the festival.

Morning of the festival

The first morning of the Festival of Sant Antoni the grallers and the trabucaires of the neighbourhood awaken the neighbours early to announce that the day of the festival has arrived. That same day the popular culture groups of the neighbourhood go out in a parade. This is a musical form of live rhythm and popular origin that was born in the seventeenth century and came interpreted by travelling musicians (hence the name "pasa-calle"). Giants, animals, devils, trabucaires and groups of musical animation participate.

On the last day of the festival, the Diables de Sant Antoni group organise a correfoc. In this tradition, a group of people disguised as demons parade through the streets dancing and jumping between fireworks. This is a popular Catalan cultural manifestation that can also be found in the Balearic Islands and in the Valencian Community.

La Porca de Sant Antoni is a figure of the group of devils in the neighbourhood. San Antonio is usually represented in the images accompanied by a piglet. That's why in 1995, the neighbourhood devils decided to commission the figure that you can see in the next photo. The piece is made of fiberglass and has a structure with wheels that supports it. The mascot dances with the Devils avoiding the sparks and fire but also participates in daytime parades throwing confetti and wetting the audience with the water that comes out through the nose?! 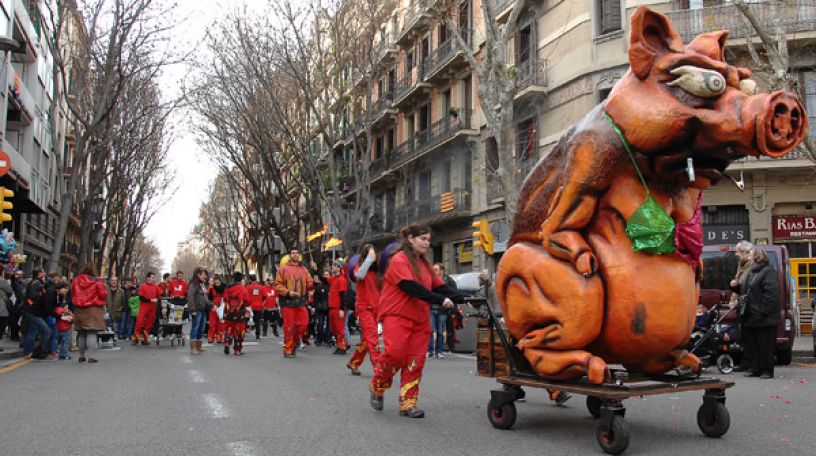 In 2013, the neighbourhood merchants recovered the old tradition of organizing a raffle at this party. In the nineteenth century, a small breeding pig was raffled, which the lucky winner fattened during the year. Today the prize is a batch of meat products.

On the day of San Antonio, the Els Tres Tombs cavalcade is organized: a parade that goes from the most central streets of the neighbourhood to the Plaza de Sant Jaume where the City Hall is located. Participants riders, amazons and traginers with all kinds of carriages. 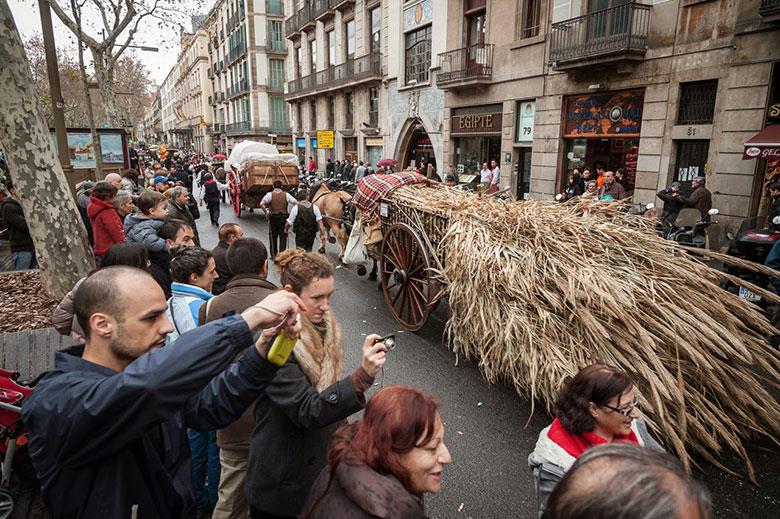 It is a typical Catalan tradition to find dancing giants in the streets during these types of festivals. In the Sant Antoni neighbourhood, the giants are called Tonet and Rita. You can see them in the photo below.

The parade is the most anticipated show of the festival and also includes the Porca, the Castellers del Poble-sec, the Trabucs de Sant Antoni and the Colla de Xamfrà music band.

In the parade, we also find small giants called backpack giants that form an inseparable troupe of four characters that represent trades related to the market: (1) Rosa is a fishmonger with a basket loaded with fish (2) Sisquet represents a waiter (3) Mingo is a butcher with a knife in his hand and a string of sausages hanging from his neck and (4) Amador represents a bookseller who participates in the Sunday market of Sant Antoni. 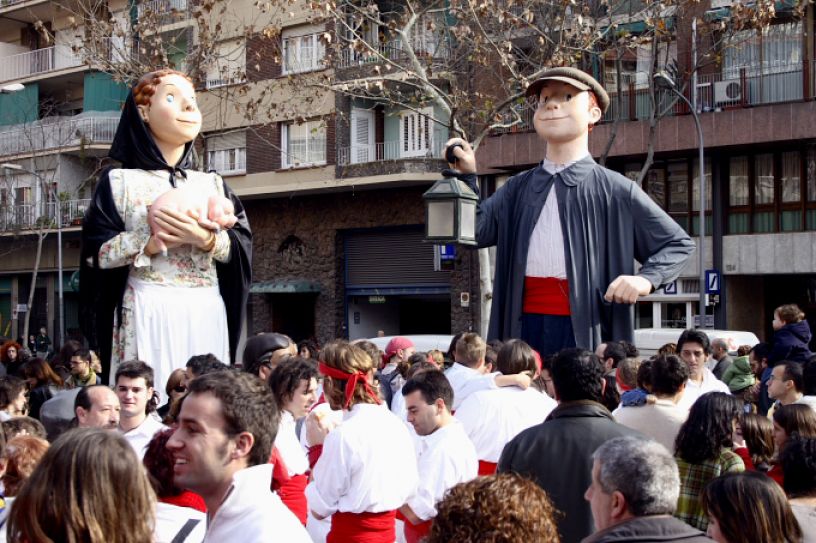 Tonet and Rita: Giants of the Sant Antoni neighbourhood

In the neighbourhood festivals, it is customary to have a photo contest to promote the event through social networks. In 2017, the Sant Antoni Comerç association (SAC), the Espai de fotografia Francesc Català-Roca and the festival committee created the contest. The photographs could be taken during the whole party and without prior registration. Three prizes of € 300 were awarded.