Picasso and Barcelona: A Love Story 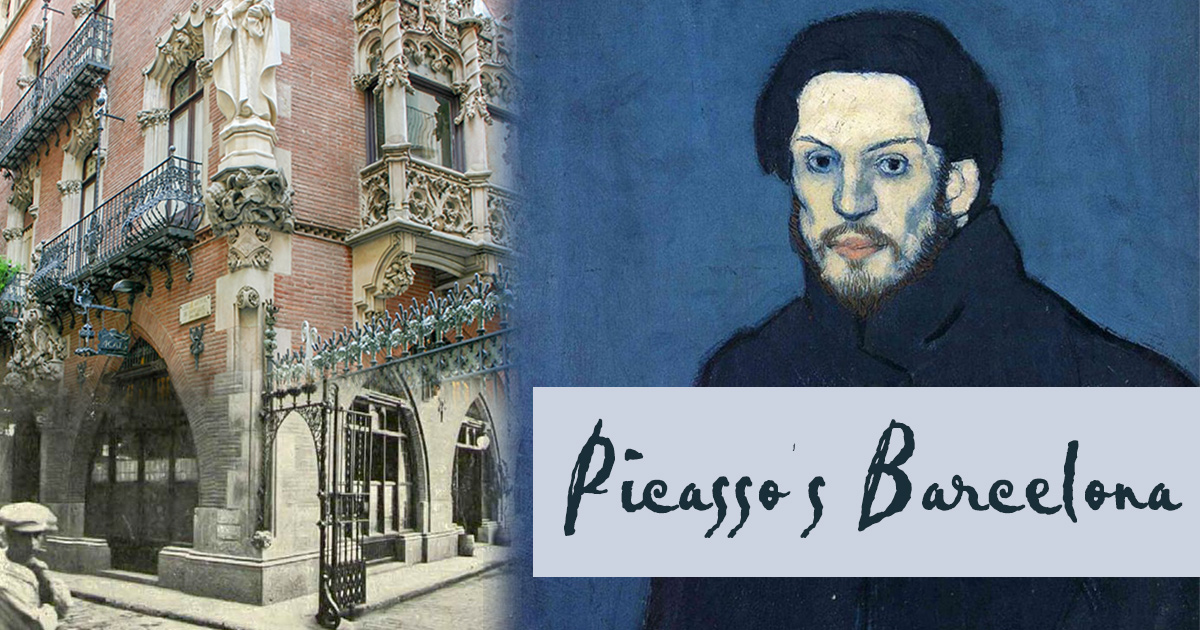 The Spanish painter started his career in the Catalan capital

Although Picasso is known to have spent a large part of his life in Paris, he also spent a lot of time in Barcelona. The Spanish artist's first steps to becoming a painter were complicated, but in Barcelona he had his first successes and started to develop a particular style.

In this article, we review the importance that Barcelona had on the personal and artistic life of Picasso. From the arrival of Picasso in 1895 for his classical training at the School of Fine Arts of Barcelona, the period when he joined the Modernist circle of Els 4 Gats, until the numerous visits that Picasso made to Barcelona to see his family and friends… before the Spanish Civil War and Franco's dictatorship separated him forever from the Catalan capital. At the end of the article, we suggest a tourist route through Picasso's Barcelona.

If like Picasso you want to spend some time in the city, you'll need a monthly rental in Barcelona. We have lots of monthly rental apartments available close to where Picasso lived, all in the Gothic Quarter and Born.

Spain is home to many great painters such as Dalí, Picasso and Goya. All of them have a particular style related to the regions where they lived that influenced their art. For example, the landscapes of the Catalan region of Empordà influenced the eccentric Salvador Dalí.

It’s difficult to relate Pablo Picasso to a specific place because during his life he lived in very different places. The painter was born in Málaga (1881) and spent a large part of his life in France, but Barcelona was the city that saw him born as an artist.

The year 1895 started dramatically for the young Picasso and his family, since his sister, who was a painter, died of diphtheria in January.

In September, his father was named professor at the School of Art in Barcelona (the Llotja) and decided to bring his whole family with him to the Catalan capital. The Ruiz-Picasso family moved at the end of 1895 to number 4 on Passeig Isabel II, where now you can find a famous restaurant Les 7 Portes (The 7 Doors). Picasso was 14 years old. 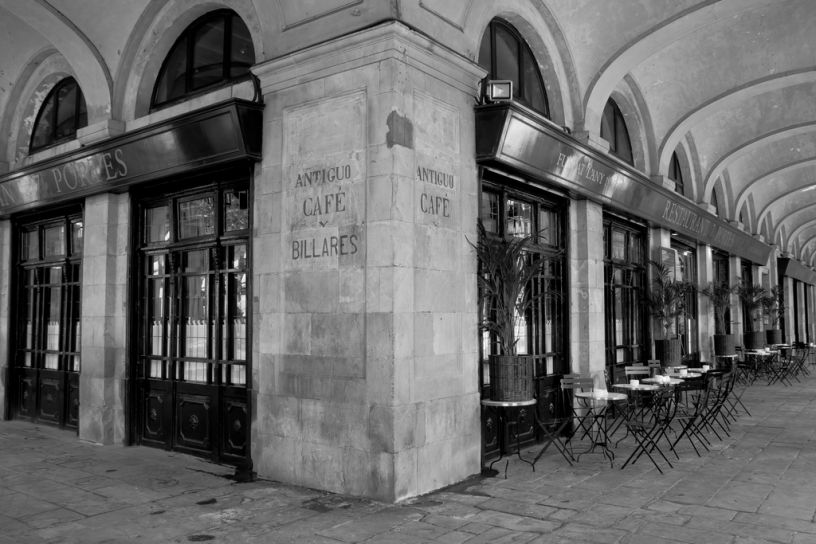 Pablo was accepted into the prestigious School of Fine Arts in Barcelona where his father taught. Before his time at La Llotja, Picasso also had trained in the Galician capital of A Coruña where he lived with his family from 1890 until 1895.

Classical art was taught at La Llotja and this school gave Picasso’s painting a fairly classical style initially. This could be seen especially when the young 14-year-old painter presented at the Exhibition of Fine Arts of Barcelona in 1896. A very different style from the works created by the artist in the following years of his career. The image below is "The First Communion". 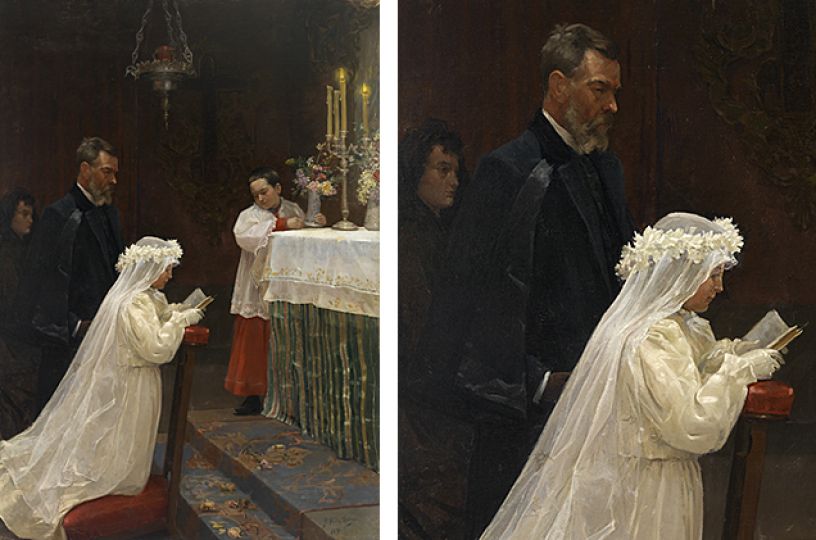 The First Communion by Picasso

Picasso was 15 years old by the end of 1896 and had his own workshop a year after he arrived in Barcelona. He shared it with Manuel Pallarès at number 4 on Carrer de la Plata. There is where he painted the painting Science and Charity (1897) that was presented at the National Exhibition of Madrid, which awarded him an honourable mention.

Did you know? The father of the young painter served as the model for the doctor represented on the table in Science and Charity. Picasso used his father more than once in his works.

The artist left his life in the Catalan capital behind to move to Madrid in 1897 to study at the Academy of Fine Arts of San Fernando. 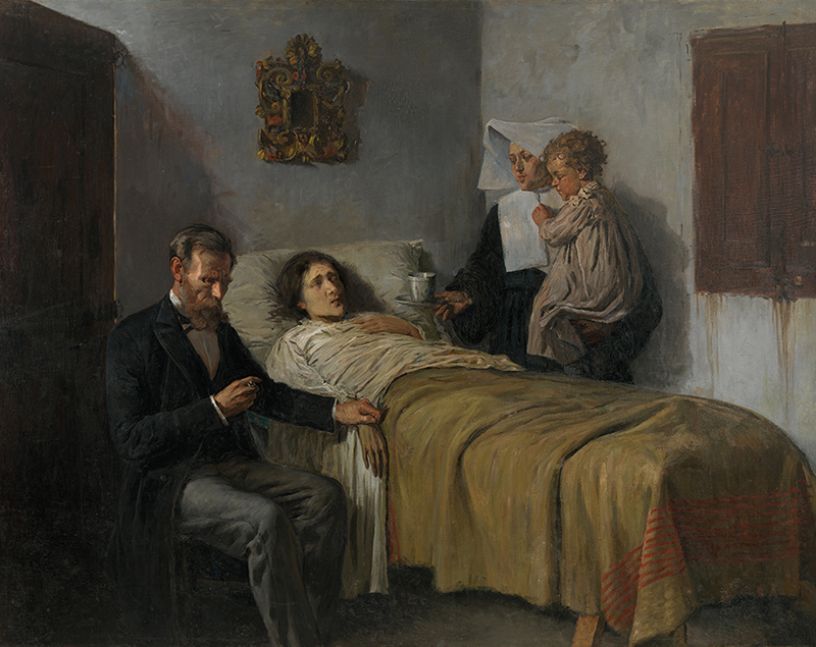 Science and Charity by Picasso

From Madrid to Barcelona

Maybe it was the classical teaching that he received in Madrid, or maybe classical style in general, but Picasso was becoming displeased. The artist began to aspire for something different, something less… academic. At 17 years old, he returned to Barcelona in January 1899 after some travelling.

The Catalan capital, even then, was a very cosmopolitan city. It offered Picasso the opportunity to discover new horizons, such as the Catalan modernism movement that was in full swing at the time.

In 1899, Picasso was frequently invited to the restaurant Els Quatre Gats (The Four Cats). This establishment offered more than just cheap food and live music; it was home to the modernist art movement in Barcelona.

The painter went on to draw the menus and organise an exhibition in the hall of the restaurant. This restaurant marked the artistic development of Picasso and is still open to the public on Carrer de Montsió in the Gothic Quarter.

Over the decades, many architects, musicians, poets, painters and designers have frequented Els 4 Gats to have a drink and converse with like-minded people.

Did you know? Another well-known resident of Barcelona who also shared his affection for the Els Quatre Gats restaurant was none other than the internationally renowned architect — Antoni Gaudí. 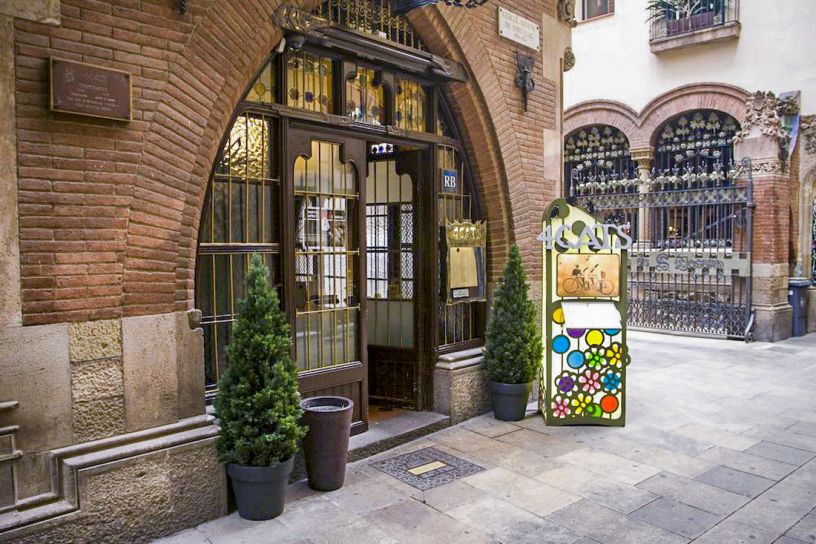 In a crucial moment in his career, Picasso forged two friendships with the painters Isidre Nonell and Carles Casagemas. It was these people who made Picasso’s journey to Paris possible throughout 1890. Nonell lent him his studio in the French capital and the Spanish painter stayed there for a short time, but returned to Barcelona.

Shortly after the Picasso’s return, Casagemas committed suicide in Paris. This event greatly upset the artist. The sadness that engulfed him was reflected in the paintings of that time and resulted in one of the artist's most famous periods.

After his friend's suicide, the painter locked himself up in his own pain. This sadness awakened the development of his first personal style. The first painting painted by Picasso in this period represented the death of his Catalan friend — Carles Casagemas i Coll.

The following works are equally sad and full of melancholy; the painter chooses the omnipresence of blue in his painting to accompany themes such as death or old age. In the following image, you can see the picture The Death of Casagemas. 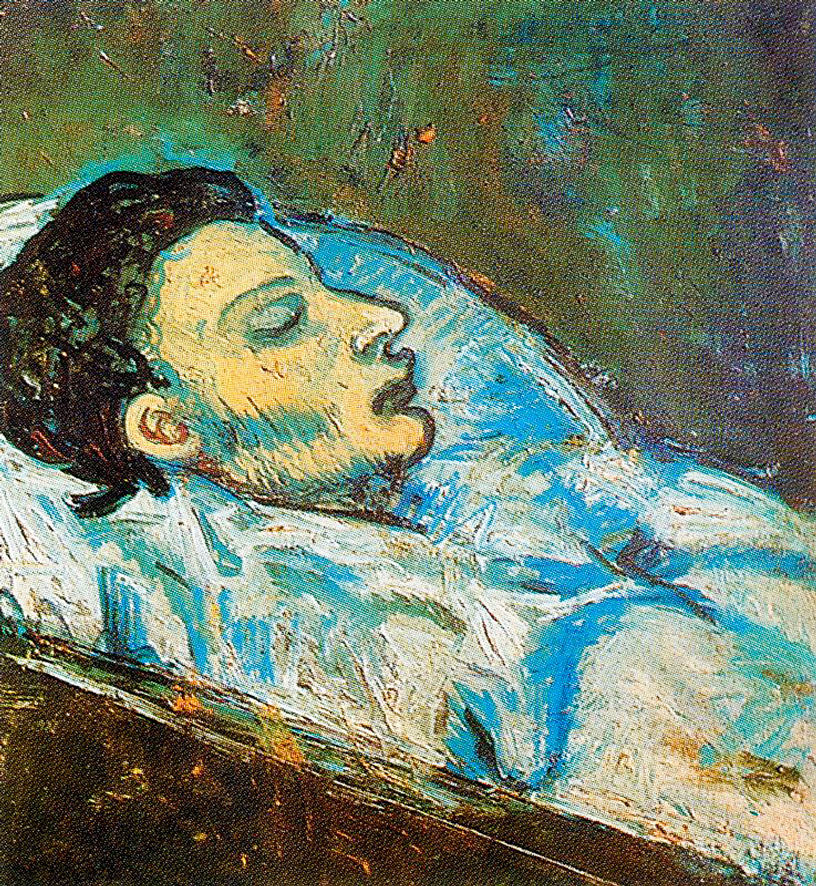 The death of Casagemas by Pablo Picasso

During this period Picasso went back and forth between Paris and Barcelona, however after spending 14 years in the Catalan capital, in 1904 the painter decided to move to Paris.

Although his first years in the French capital weren’t easy, Picasso saw the promise of success in this city, and that motivated him to remain there. The artist was not wrong and soon found the expected success.

Visits to friends and family

The presence of his family and a great number of his friends in Barcelona meant that the painter often returned to the Catalan capital. This maintained the ties that existed between him and the city.

On his last visit to Barcelona, Picasso only stayed for a few days with his wife at the time and child Paulo. He was no longer the man who left Barcelona in 1904. The painter was already dressed as well as a banker, staying at the Ritz hotel. Far from the precariousness experienced at the beginning of his career.

The Spanish Civil War (1936–1939) and dictatorship of Franco (1939–1975) meant that Picasso would definitively move away from Barcelona and Spain. Pablo Picasso was openly pro-communist, purveyor of the anti-Francoist left and the author of an iconic piece against barbarism in arguably his most famous painting of all — La Guernica.

Picasso maintained strong ties with Barcelona throughout his life and it was in this city he wanted to have his museum.

In 1960, by express wishes of the artist, his friend and personal secretary Jaume Sabartés proposed the creation of a museum to Barcelona City Council dedicated to Picasso's works. In 1963, the museum was made a reality and its doors opened in the Palacio Aguilar at number 15 on Carrer de Montcada.

Nowadays, the permanent collection contains a total of 4,251 works by the artist. The museum covers an extensive period of his work, but mainly focuses on the work of the artist during his times in the Catalan capital.

If you want to follow the footprints of Picasso's art in Barcelona, we suggest five places:

Alternatively you can book a private and personalised tour with an professional guide who will bring you on a 4-hour journey through the life of the most famous painter of the 20th century:

If you don't want the expert directly guiding you. In the following article you can read our own expert advice about these places in more detail, with a map that will help you embark on the Picasso route in Barcelona around the Gothic Quarter and Born areas.