A guide to local libraries in Barcelona

Find the library in Barcelona that suits you the most

Barcelona offers a wealth of libraries and in this article we'll explain all the information you need, such as where to find your local library, general information, libraries that open on Sundays and public holidays, places where you can study at night and a selection of the top five libraries in Barcelona.

The Barcelona province currently has 213 registered libraries, of which 38 are located in the city centre. Keeping in mind that 20 years ago there were no more than 18 libraries, it can be said that in Barcelona has faith in the education and culture of its inhabitants. This is a result of a plan established in 1998 called Pla de Biblioteques 1998-2010, which aimed to increase the quantity and quality of libraries by 2010. The regional and local government has as an objective to improve library infrastructure, construct new ones, and renovated the existing ones.

In addition, most of these libraries have invested heavily in the digitization of their services. Barcelona City Council has created an online library resource search engine. In this catalogue you can find information on books, audio books, newspapers, films, music CDs, magazines and other resources by title, author, subject or date across different languages. This resource can be checked online from home, so you can check in advance if a book is currently stocked or out on loan. If it's out on loan, a due date is shown so you know when to expect it back.

Now there's no reason to put off work due to lack of resources because you can also get many digitally formatted books and consult them from home. Even though it's not always necessary to visit the library, we really recommend that you do because the ones that we are listing below are well worth seeing in person.

If you're a new student in Barcelona and don't know where is the nearest library to your apartment, then you can consult a directory developed by Barcelona City Council with all the addresses of the libraries in each neighbourhood by clicking here.

Selection of the best libraries in Barcelona

The name of this library literally translates to Water Deposit. As the name indicates, this library from Pompeu Fabra University was originally a water deposit for Barcelona. It was built in 1874, completely renovated in 1993, and used as library since 1999. It's one of Barcelona's most unique buildings and its particular architecture meant that it was selected to be used as a pavilion for the 1929 Barcelona International Exposition.

It's most prestigious collections include — among others — compilations from the Haas Library, Barcelona Chamber of Commerce, and Jaume Vicens i Vives University Institute of History, which has its headquarters in this building. Being a university library, it's very suited for studying with the necessary accessories to be able to get organized, like bright spaces, plugs, WiFi and silence. It specializes in humanities.

Opening hours:
Monday to Friday: 8AM to 9PM.
Saturday and Sunday: 10AM to 9PM.

Inside the National Library of Catalonia

The library of Catalunya may just be the most emblematic of Barcelona. It was founded in 1907 by the Institut d'Estudis Catalans (IEC) but was once the Santa Creu Hospital, built between the 15th and 18th centuries. It's located in one of the most important civil Gothic complexes in Catalonia and has undergone many changes since. It shares the same building with the smaller Sant Pau – Santa Creu Library (which takes its name from the old hospital).

These two libraries are part of Spain's cultural heritage. With the building's remodelling, functional reorganization and digitization, it has been able to adapt to modern times. It has historically significant collections from different eras in various formats. The site also hosts a number of cultural group activities, workshops and training courses for all ages. Most of all, its impressive architecture stands out, with a garden lined with orange trees, courtyard from the Mary of Egypt Covenant, and a general reading room with large open spaces. It's estimated that the collection spans over 3 million documents, accessible in different formats. It specializes in Catalan culture. 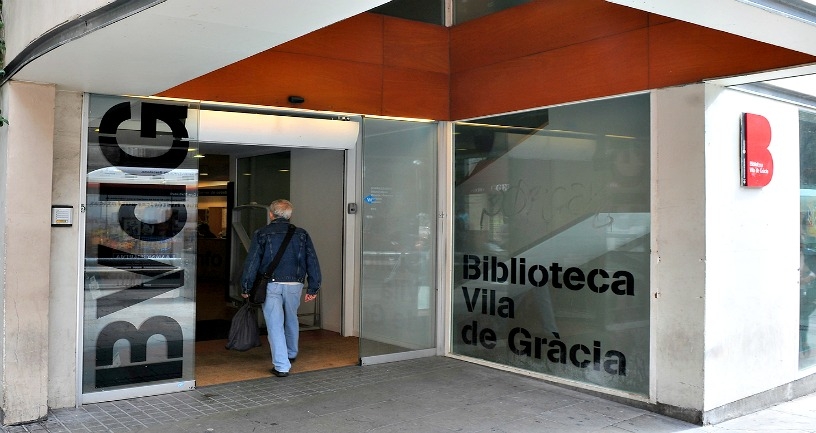 Vila de Gràcia library is much more modern than the aforementioned libraries. It stands out for having good facilities for electronic devices — many plugs, good WiFi, computers in good condition... It has approximately 48,000 documents, among which it is very easy to find what you are looking for. It has several rooms — apart from the general reading room — with different environments depending on what you need including study rooms, a computer room, magazines room, multimedia room and a virtual platform.

It's appreciated by students for the reading rooms with sofas, fully digital book return system and large calendar of activities available. It could be said that this library also serves as a community centre too. It specializes in African culture.

Opening hours:
Monday and Thursday: 4PM to 9PM
Tuesday, Wednesday and Friday: 10AM to 9PM
Saturday: 10AM to 2PM

Sagrada Familia Library is a modern 4-floor building opened in 2007. Its façade and interior are modern in style with a futuristic ambience owing to the grey walls, white high ceilings and large windows. It's located next to the Sagrada Familia, which is perfect if you want to disconnect and take a stroll.

There are some 85,000 documents available of various ages and formats. It has conference rooms as well as art and cultural exhibitions. One of the most prominent qualities is its very complete space for young people called L'Espai Jove (The Young Space).

Founded in 2005, this library pays homage to Jaume Fuster, the writer-scriptwriter-translator and member of L'Associació d'Escriptors en Llengua Catalana (Catalan Language Writers' Association). It's located in the Gràcia district and boasts an abundance of workshops, activities, exhibitions and chats under its roof. For these reasons and more, this library is known as a centre of "massive cultural movement". It's home to over 105,000 documents of all kinds.

It has a very interesting section about the history of the Gràcia district, including resources on its artists, historians and social evolution, this in addition to the same on Barcelona. Apart from the large spaces for studying and reading, it has a very peculiar and attractive architecture.

We all know that there's some sort of conspiracy between teachers to always make you work or have the most important exams on returning from a holiday. So you get serious and go to concentrate at a library nearby your house... But it's closed! Don't worry, Barcelona offers several libraries that are open during these occasions and here is a list. We recommend you get up early in these situations as spaces usually fill up quite quickly.

Libraries open for studying at night

As you may have noticed, some libraries in Barcelona are open at night for people studying, normally until 1AM. If you're one of those people who leave everything to the last minute or you simply work better at night, then here is a list with a few more libraries that permanently leave their doors open at night: