How is Easter celebrated in Barcelona? 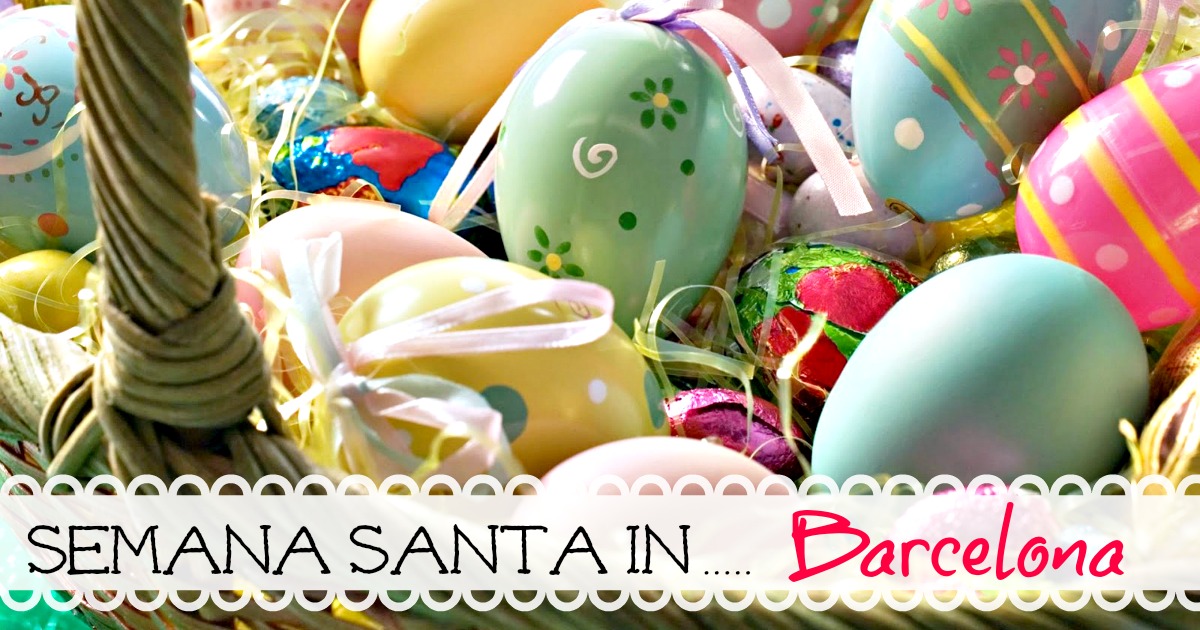 Easter in Barcelona - From traditions to chocolate

As a country with Catholic heritage, Easter is a very important festival in Spain. The celebration of Easter is an event that is felt strongly in all regions around the country because it is celebrated in every town, from the smallest to the most important cities. The truth is that Barcelona at this time is mostly quiet compared with the tide of people who gather in the processions of Andalucía... But Catalonia does have typical traditions that we'll see below. Take advantage of the celebrations to rent one of our apartments in Barcelona.

Easter 2019 dates with celebrations in Barcelona

The biggest Easter celebrations in Barcelona take place on:

Maybe the most important and significant day of Easter is Palm Sunday. In the Gothic Quarter there is a procession known as La Burreta, or 'Little Donkey', that commemorates the return of Jesus to Jerusalem. Children bring their palm leaves in anticipation of getting them blessed with holy water, and some of them even hide sweets and toys within their intricate designs. Olive and palm leaves are also hung from doors as they are said to give protection from evil forces.

Though the Sunday procession is one of the more lively and therefore more well-known celebrations, there are also two other famous ones that take place on Good Friday, which are Nuestra Señora de las Angustias (Our Lady of Sorrows) and Nuestro Padre Jesús del Gran Poder (Our Lord Jesus of Great Power). These processions are all concentrated to pass through Las Ramblas and the Gothic Quarter. 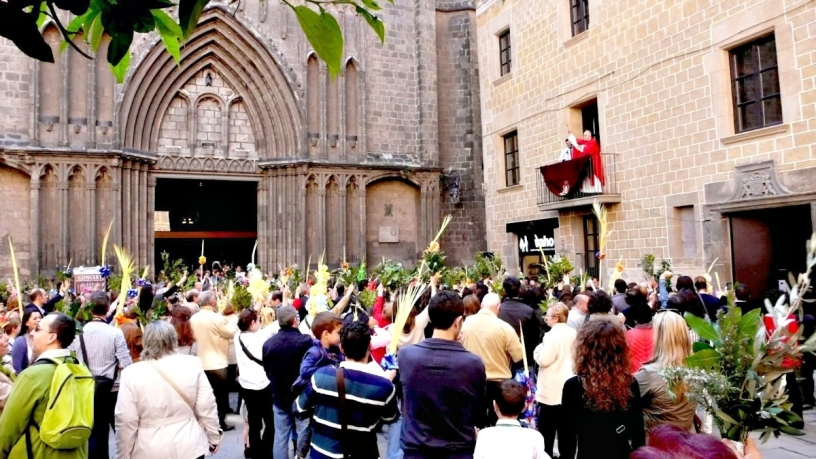 The "Mona de Pascua" and other sweet traditions

As Christian tradition dictates, meat is not to be eaten on Good Friday, which is why those taking part in the Easter celebrations in Barcelona eat cod on this day. There are various ways to prepare it, for example cod with sanfaina (a ratatouille of sorts) or esqueixat (raw and shredded). Cod is one of the main ingredients used in typically Catalan dishes, and during these celebrations it becomes a traditional dish.

When it comes to sweets and desserts, in addition to the typical easter eggs you'll find around the world, Catalonia has its own thing called La Mona de Pascua. It's a time-honoured easter dessert that started off as a cake decorated with cooked eggs, ribbons, and hand-made chicks and adornments. Today they incorporate well-known characters from children's popular culture. Custom has it that the godparents gift the Mona to their godchildren on Easter Sunday, but these days everyone goes and buys one as early as Palm Sunday or even earlier.

What started off as a cake from Arabic and Roman conventions has turned more into an art-form these days, with cake-shops and bakeries building complete scenes from popular culture out of chocolate. There are some amazing works of art that you can enjoy simply by visiting these locales during this time of year. 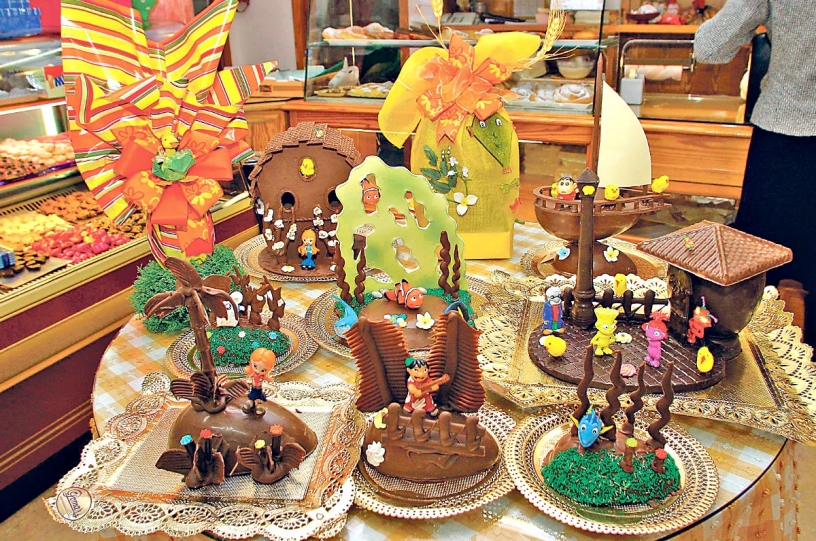 There are also other sweet treats like pestiños — fried pastries with sugar and honey — and the more local Bunyols de Quaresma, which are fried balls of dough sometimes served with cream and chocolate fillings. 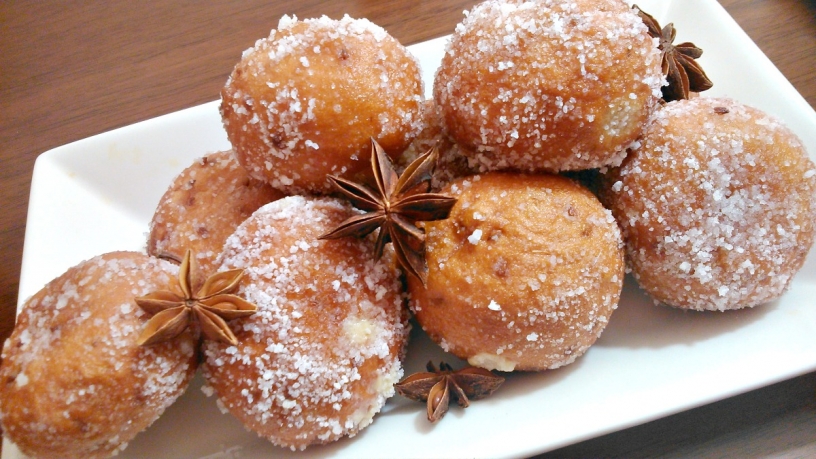 Public holidays during Easter in Barcelona

It's important to know the public holidays if you're visiting Barcelona during Easter. Shops and the majority of museums will be closed on Good Friday, Easter Sunday and Easter Monday. On the other hand you can still find open restaurants, especially to accommodate families and tourists looking to have family meals.

If you've spoken to any Catalan between February and May, then surely you haven't stopped hearing that word: calçotada. Hurry up, because April marks the end of the season! Calçots are similar to leeks, but they are a unique variety that only grow in Catalonia. This food is chargrilled on an open-flame, then served with a sauce called Romesco alongside all sorts of meat.

The calçot season starts winding up until the next year before the end of April, so Easter is one of the last chances to get together with a group of friends and spend a day in the countryside or suburbs — with the excuse of eating calçots, of course.

If you order this dish in any of the restaurants where it's listed as a specialty, then its presentation might surprise you. They are served on terracotta; at other times even wrapped in newspaper! It doesn't end there, if you wish to avoid looking like a 'guiri' then take a look at how the Catalans eat them in the photo below.

This is how you eat calçots

If you have the chance to leave Barcelona, then it's recommended to visit the towns of Cervera or Verges where there are some really unique and spectacular celebrations. In Verges, they have The Dance of the Dead and the Verges Procession events, which have their roots in the mysterious Medieval era. It begins with a celebration on Maundy Thursday, when practically the whole town will attend a theatrical representation that culminates in the Dance of the Dead where 10 people will dance dressed as skeletons in two groups with scythes or clocks without hands.

The procession is divided into two parts: the first represents the Passion and takes place in the town square at 10PM, telling the life of Jesus and emphasizing his last days; and the second takes place at Midnight on the streets of Verges representing Christ's condemnation and crucifixion. After going through the whole town, the procession ends at the church. 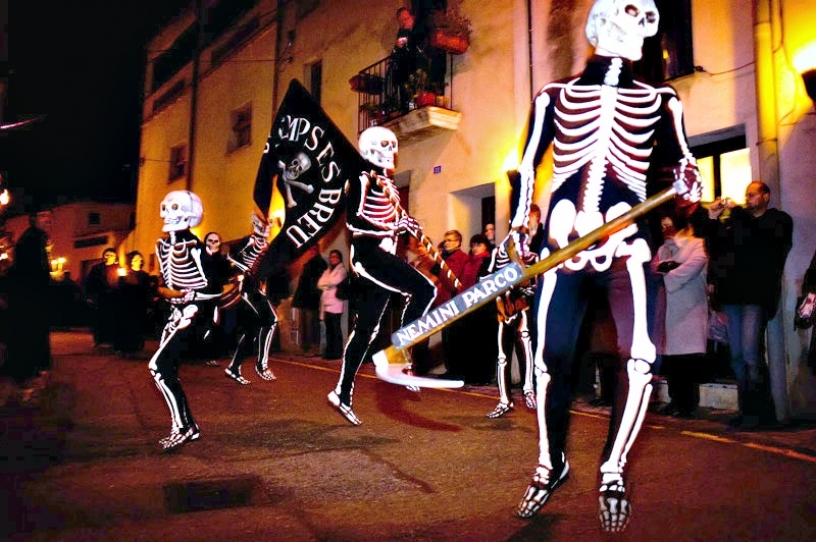 The Dance of the Dead in Verges

Cervera also has a Passion of Christ, it's a very traditional procession with roots from the 15th Century that involves some 300 participants.

That's Easter in Catalonia and Barcelona :). Are you aware of a tradition or event that's not listed but should be? Let us know through the comment box and it will likely be added.