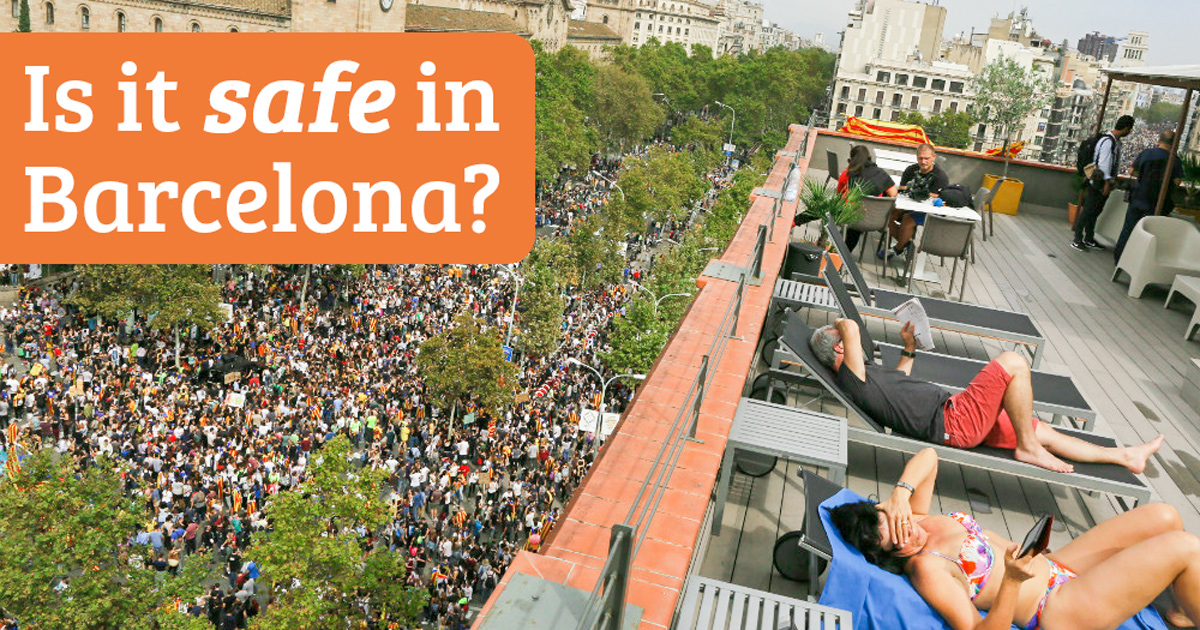 Tourism has decreased in the Catalan capital. Is this justified?

While the tourism sector in Barcelona continues to suffer the conflict between Catalonia and Spain, it's the time to restore the truth and see what’s really happening on the streets.

In this article, we first analyse the effect of the political conflict in the tourism sector in Barcelona. Then we look at how the media treats the problem, as well as if the conflict affects the people who live and work in Barcelona. Finally, we look at what several tourists and locals think about this topic.

The Catalan conflict has undeniably had a notable impact on tourism in Barcelona. In the 15 days following the referendum, the sector registered a fall of 15% in check-ins compared to the same period of the previous year.

Although some hoped this would be temporary, almost a month and a half later the situation remains the same for the majority of businesses in the tourism sector of the Catalan capital. Hotels noted a general decrease in occupancy for the month of October of 7% compared to last year. Some 4 and 5 star hotels noted a 40% decrease! The decline in occupancy therefore implies a fall in prices.

Hotels are not the only ones to feel the consequences of the Catalan conflict. Estate agencies, restaurants and other businesses that offer tourist services have seen a reduction in turnover. For example, some businesses that rent out bicycles and scooters in Barcelona report a decrease of 50% in turnover compared to last year.

The question is, will the Catalan tourism sector recuperate with the New Year’s Eve celebrations and Christmas holidays?

Jordi Clos is the president of the hotels association in Barcelona and states that this is unlikely and highlights the decrease of 40% in reservations for New Year’s Eve celebrations in the Catalan capital compared to last year.

The same applies to the first quarter of 2018, which should not show an improvement according to the forecasts of the sector. Nevertheless there is expectation to experience an extravagant summer. 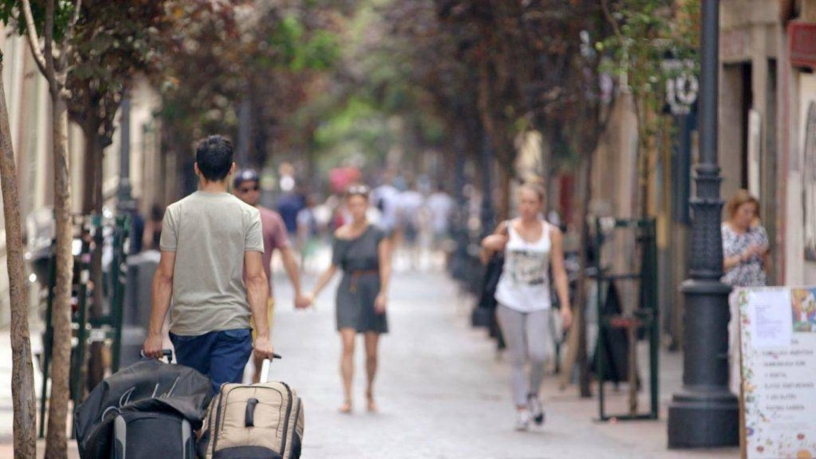 Less tourists on the streets of Barcelona

The Catalan conflict exaggerated by the media

In light of the first figures presented by hotels and tourist businesses, they all coincide with the results of the referendum and aftermath. However, the sector is primarily a victim of the image that the media gives.

Jordi Clos highlights the "repetitive" and "exaggerated" character of the media coverage of Catalonia. Not a single day has passed without a new controversial article about Catalonia. This makes the citizens across the four corners of Europe feel that the situation in the area is critical. This feeling is amplified by the images and videos that circulate social media.

The photos that circulate the internet arouse lots of anxiety. The police attacked protesters and huge crowds in the streets during the local referendum on independence… Images almost worthy of civil war.

If you live in Barcelona or have visited the city during the last two months, it's very likely that you'd have received messages from relatives worrying about you… A curious lack of understanding of the conflict! As you'll see, the reality is much quieter than one might think.

What is really happening in the city?

Even if the region is really involved in a major political crisis, it's necessary to put the situation into perspective. The people who live and visit Barcelona are far from experiencing a tense climate similar to that described previously.

This is a characteristic of the Catalan Independence Movement that has not resulted in violence. Mass protests for this cause have taken place repeatedly for many years and never before did they scare the visitors of the city or those considering moving here.

The major independence protests take place on 11 September — the National Day of Catalonia — also called Diada. Since 2013, these events bring more than a million Catalans together, who peacefully demand a more independent and free Catalonia. If you want to know more about this, here is an article that details the evolution of the Independence Movement in Catalonia through political and social events over the last half-decade.

Events limited in time and space

If you're coming to Barcelona, then don’t be afraid if you find people with a Catalan flag on every corner. The events take place very occasionally, in specific places and are often symbolic. For example, Plaça Sant Jaume, where the Generalitat is (the Catalan government); or Plaça Universitat, an important site for the Catalan youth. 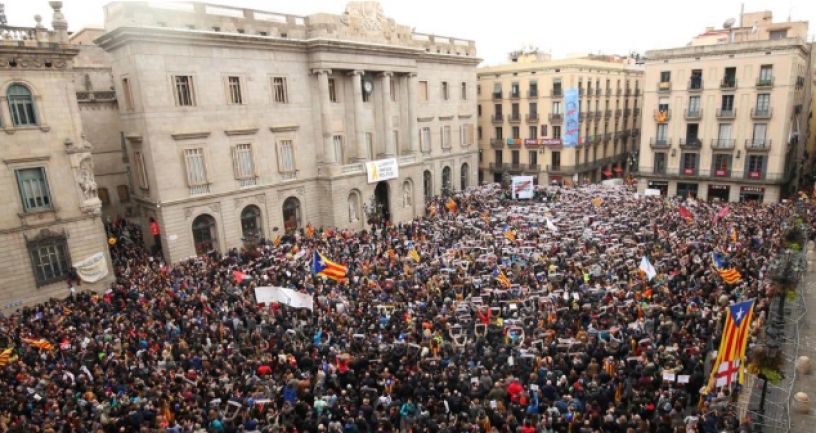 The places frequented by tourists such as Las Ramblas, Sagrada Familia, Barceloneta and Port Olímpico are very rarely affected by these meetings. Anyone who has been to these areas recently can say that the atmosphere is perfectly normal for a sunny November, with tourists spending time there without any problems and far from the political conflict.

The majority of people who have visited Barcelona in the last few weeks have only noted one thing that is unusual, and that's noise from the banging of pots at 10pm. For the Catalans, this is a way of expressing their dissatisfaction with Madrid. It was thanks to Twitter that they managed to reach an agreement on what time they would bang their pots to the rhythm of their disappointment.

This method of protest was born in Argelia, where the French used their cooking utensils to show the opposition to the independence of the country. Since then, this method has been observed in Chile, Argentina, Venezuela and Quebec.

This is more proof that life in the Catalan capital is normal. Buses, metro and other modes of transport function completely normally. In the case of the general strike, transport did not affect many people thanks to the minimal services and the fact that it has not been followed up since.

Saturday, 11 November was perhaps the day that the network was most affected by the strike. Anyway, it's still very punctual and outside that one day, the population has been using public transport as normal.

Opportunity to travel to Barcelona at a low cost

Prices of accommodation and flights have decreased and now tourists have the opportunity to travel to Barcelona cheaply. This city is normally packed with tourists and now you can enjoy it in all its tranquillity.

You can listen to people talk about the situation but they know how to balance things. You don’t have to worry about getting caught in a violent situation if that’s what scares you. Although the image that has been transmitted in the last few weeks has been hatred, this is far from reality. Even between the Catalans and Spanish, there has been a mutual respect over the years. They may have their differences but they don’t hate each other as this video shows.

On social media you can find testimonies of the peaceful climate in the city. Here are some examples from Twitter.

(1) I Live in Barcelona. I work in Barcelona. And I love Barcelona! I have to say that the way it is shown in the media nowadays, has nothing to do with the Barcelona I life at. The Catalan issue, is a political issue. There is no violence and there will ever be violence, as the pic.twitter.com/QA5TKHvTbW

The citizens send messages of peace and love. They invite tourists to return to the city. The exaggeration that the media has described doesn't exist, instead, the city emanates joy as usual.

(2) Catalans are peaceful people.Barcelona this autumn is just as nice as any other. Come and enjoy! Actually, take the advantage of visiting the city, with no queues, with lovely weather (we have now a second little summer, with lots of sun, and up to 18 degrees).

Despite the images that have been released and the many alarming articles that have been written, some have decided to go to the Catalan capital anyway. The latter have not been disappointed.

My fourth time in Barcelona and the first that I am being a proper tourist! What a stunning city ♡

Some take advantage of their presence in Barcelona to share their experience on social media. The result for many of them, is that there is no sign of the Catalan conflict in the streets and the city maintains its warm and welcoming atmosphere.

Came to Barcelona for Smart City Expo.No sign of "Independence" movement from a tourist viewpoint.バルセロナ到着。「独立運動」は、旅行者にはまったく感じられません。 pic.twitter.com/5Y7NlmbgyQ