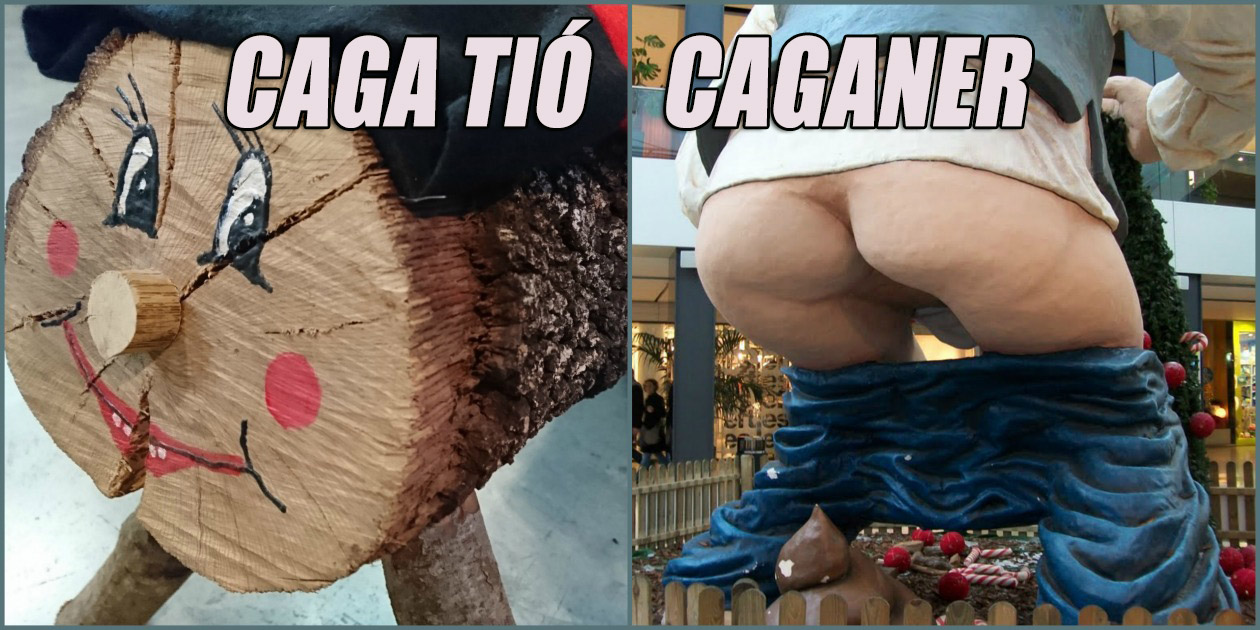 In this article we tell you about the past and present of two scatalogical Catalan Christmas traditions. The first is of a person pooping and the second is a log that defecates Christmas gifts. They are Caganer and Caga Tió respectively, and lately they've been crossing borders, even being featured in an article from the New York Times as well as the late night chat show on NBC.

We encourage you to come to Barcelona this Christmas and see for yourself that these traditions are 100% authentic... While you're at it you can feel at home in one of our holiday accommodation in the city.

"Here’s one thing Donald J. Trump and Hillary Clinton have in common.". This is how an article in the New York Times recently began, accompanied by their caganers along with Obama. That's all it took for sales figures to rocket in the USA, expanding the horizons and making this Catalan tradition more popular than ever. 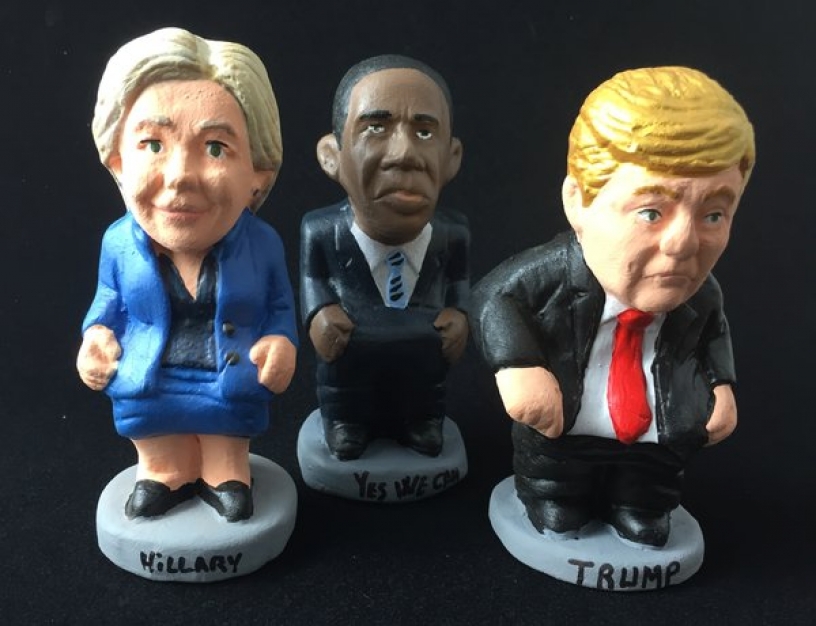 However, these aren't the only people who you can see caught "in the act". The list also includes Messi, Ronaldo, R2D2, The Simpsons and even the Pope. Let's try to explain why...

The tradition behind the caganer figurine

As you may already know, in many Spanish speaking countries the main religion is Christianity, or a variation thereof, and thus it's very common to set up a nativity scene of baby Jesus accompanied by the Virgin Mary, Joseph, a donkey, ox and more. The barn setting may be surrounded by mountains, rivers, snow or even palm trees. There are no shortage of characters, like the shepherd and his sheep, the Three Wise Men... Anyone living in a Christian country could probably picture a scene like this.

However, amongst these characters there is one that tends not to leave visitors to Catalonia indifferent, making them look twice... The character known as the caganer. Adults and children alike tend to centre their attention on this figurine the first time, and once it's existence is known, onlookers will actively search it out as it tends to be hidden away amongst the bushes and trees. It doesn't take centre stage, it's a figure that goes in the background. 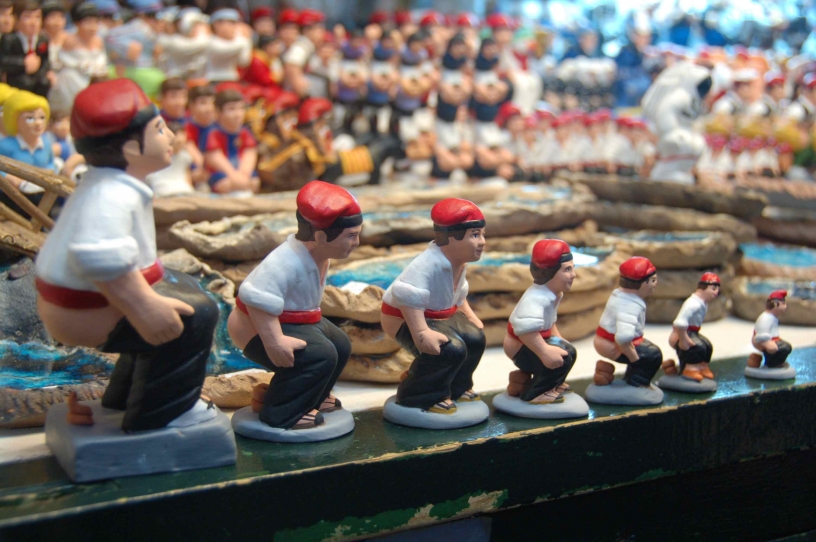 The first caganers appeared in engravings and tiles around the 17th and 18th Centuries. Later, they began to appear physically in nativity scenes, becoming popular by the 19th century. Despite their scatological representation and though it's hard to believe by outsiders, this figure is completely and 100% accepted by the Church in Catalonia. It represents fortune to those who place it in their scene, and perhaps misfortune to those who don't do so.

The caganer humanizes the nativity and it draws people closer to the scene of the Christian messiah's birth. Not just that, it has a symbolic meaning to do with the fertilization of the earth, symbolically fertilizing the nativity scene in which it is featured so that it will prosper next year too.

From a purely traditional perspective, the caganer is dressed as a typical Catalan rural peasant, with a classic red hat called a barretina and white shirt. In more recent times, these figures have been popularized by using currently recognized figures kneeling down and... Pooping. As mentioned before, it's not unusual to find characters and political figures caught in the act, including Trump, Merkel, Star Wars characters and more.

If the caganer is becoming more and more recognized, the same is also happening with Catalonia's other Christmas icon - Caga Tió. On Late Night with Seth Meyers, the actress Kate McKinnon, one of the protagonists of the recent Ghostbusters movie, spoke about this tradition amongst a strange mix of laughter and discomfort from the American public. You can watch that clip on their official channel here:

It's simply true that nobody who comes to Catalonia during Christmas fails to notice the following image:

What's Caga Tió? Imagine this for a second...

You're walking along the street and can't stop seeing wooden logs with eyes, a huge smile and the Catalan barretina hat. They're everywhere. You don't understand it. You want to ask...

Well, turns out it also poops. It's Catalonia's version of Santa Claus. There's no big man with white beard and red outfit here that sneaks in at night. Nope. Instead there's a log that poops out all the gifts on Christmas called Caga Tió - which means Pooping Log.

It's hard to understand, of course, but Catalans will explain it like it's the most normal thing in the world. "The Pooping Log is a wooden log that visits people's homes at the beginning of December". Children have to be good and take care of him while he visits their homes, which entails keeping him warm by covering him with a blanket and feeding him every day. (Just so you know, his favourite food is mandarin peelings... but let's keep that between us...).

It's a very positive tradition because children need to actively participate and work together to make Caga Tió feel at home... Until Christmas. When Christmas finally arrives, they sing songs to Caga Tió, typical songs that almost everyone who grew up in Barcelona knows. All that nice caring behaviour is thrown out the window, because they proceed to hit Caga Tió with sticks until he fulfils his part of the deal and literally poops out the gifts and sweets. 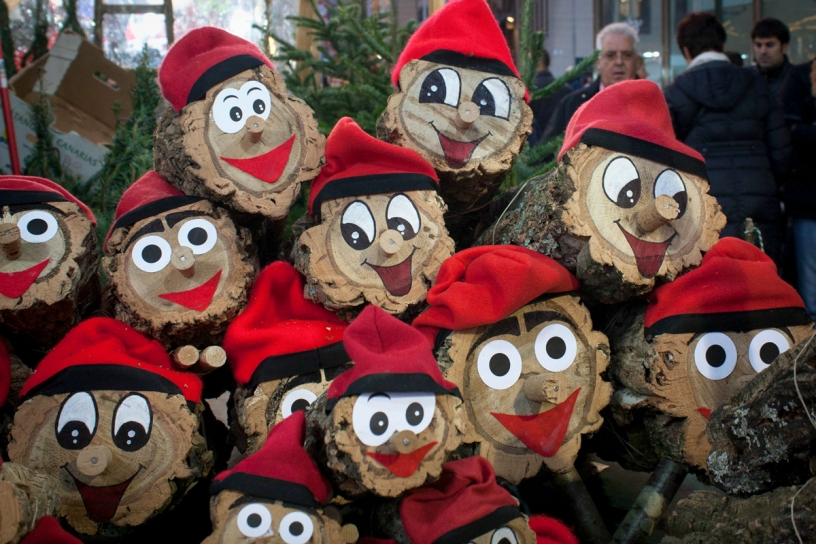 Caga Tió in a patisserie

The tradition emerged from the need to heat homes during the cold Christmas period. The log back then was just a simple log, no eyes or face, that was thrown in the fire and heated the home. With the family all gathered, children would receive their Turrón and sweets.

There's one local tale that takes place in rural Catalonia in a farmstead in Penedés. Some peasants were warming up around a fire as they began to hear a voice coming from the the chimney which exclaimed "Hey, I'm coming down! I'm coming down". In that moment, the freezing cold men, armed only with bravery told him to come down... And curiously, a log fell from the chimney. Unsure whether the log spoke or not, it was kept separately from the fire. This happened some five times and each time the log was kept apart from their fire. Before they could separate the last log, the five logs from before turned into a trunk with form of an elderly man. To thank them for not destining him to the fire, he told them where there was a treasure, and that this treasure they should give to a beggar who will call on their door the next day. The peasants obeyed the old man's orders, and it's said that fortune shined upon them all forever.

Perhaps though, it was with the arrival of radiators and central heating that caused the log to go from kindling to Christmas houseguest. So this, the cousin of the Christmas tree, evolved to become the magic log that children all over Catalonia care for today.

Therefore, this Christmas you know that if you come to Barcelona and you behave well, you might just get a brilliantly crappy present ;) 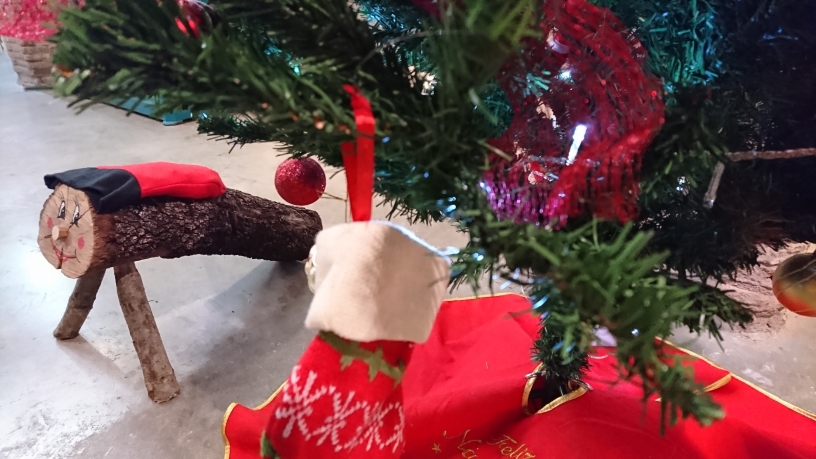 Caga Tió and Christmas tree together

The song that's sung to Caga Tió and translation

And here's a video of how the Caga Tió celebration goes: